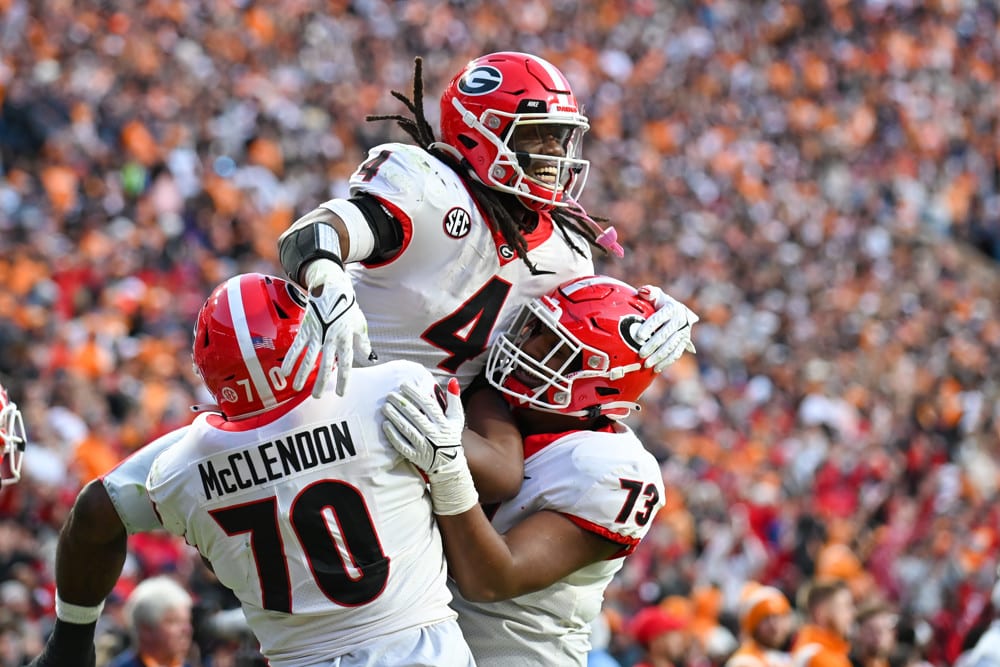 While bowl season has been fun we can now move on to the games that aren’t glorified exhibitions. Finally, no opt-outs, no transfers, and no coaches that have already moved on. It’s College Football Playoff time and we have two great matchups heading our way on New Years’ Eve.

Here’s my preview and pick for the late game.

For the CFB Playoff nightcap, we’ll be in Miami, FL where the #2 Michigan Wolverines do battle with the #3 Georgia Bulldogs. Michigan, and HC Jim Harbaugh, came out of nowhere as an unranked preseason team and put up a stellar 12-1 record with a win over Iowa in the Big 10 championship game. Georgia, on the other hand, was dominant all season leading up to the SEC championship where they lost to Alabama, 41-24.

Georgia toppled Clemson 10-3 in the opening week and then reeled off 11 blowout victories. In that stretch, the closest game was a 17 point win over Kentucky. The ‘Dawgs were completely dominant and looked unstoppable. In retrospect, perhaps we should have considered who they beat. The SEC East was basically hot garbage this year. Kentucky and Tennessee were solid football teams and those convincing victories should be respected but there isn’t much else on the resume.

The only blemish on Michigan’s resume was the 37-33 defeat at Michigan State. It was a wild rivalry game where the Spartans got the benefit of a couple of favorable calls that may have swayed the outcome. As far as the Wolverines wins, there was an impressive 38-17 victory at Wisconsin and blowouts vs Ohio State and Iowa to end the season. In the process of making the playoffs, Michigan finished with an 11-2 ATS record which was the best in the country.

These are old-school football teams with strong offensive lines and stingy defenses. In a game where the teams resemble each other, it may come down to who can make a couple more big plays on offense. Georgia is led by QB Stetson Bennett who should be viewed as more of a game manager. He’s thrown for 2,325 yards and 24 TDs compared to 7 INTs but was somewhat exposed vs Bama turning the ball over twice.

Overall, the UGA passing game has been adequate this season with Bennett distributing the ball to a variety of pass catchers. The ‘Dawgs leading receiver is TE Brock Bowers who has 47 catches for 791 yards and 11 TDs. At wideout, the lightly recruited Ladd McConkey came out of obscurity in his freshman season and made a name for himself.

The strong suit of the UGA offense is definitely the run game. The Bulldogs have a three-headed monster at RB that includes Zamir White, James Cook, and Kenny McIntosh. All three have a legitimate chance to play at the next level. White has the most carries and TDs on the season but Cook has come on of late and is getting more touches. Stopping the Georgia ground game will be Michigan’s first priority but that may prove to be easier said than done.

As for Michigan, Harbaugh finally got some solid QB play this season from junior Cade McNamara. His stats (2,470 yards with 15 TDs to 4 INTs) aren’t going to wow anyone but they are similar to what Bennett put up for Georgia. He also can be viewed as a game manager who may not necessarily make those around him better.

WR Cornelius Johnson leads the team with 38 catches for 609 yards and 3 TDs but much like UGA, Michigan spreads the ball around. They also have a nice weapon at TE in Erick All who put up 34 catches for 374 yards and 3 TDs. Overall, it’s a young and inexperienced group of pass-catchers but they are talented with playmaking ability. It will be interesting to see what kind of separation they can get vs the veteran Georgia secondary.

Again, much like the Bulldogs, Michigan relies heavily on a ground game that finished 10th best in the country. The 1-2 punch of Hassan Haskins and Blake Corum amassed a combined 2,227 rushing yards and 31 TDs. The offensive line play has been excellent but the run game was bottled up by Wisconsin who, like UGA, has an elite run defense. Michigan relies on the run game to open up their passing attack so it will be critical to get a push up front.

Obviously, the defensive side of the ball is where both teams shine. Throw out the Alabama game and this Georgia D looked like one of the best we’ve seen over the last 20 years. However, skeptics would point out that they were never challenged by an elite-level QB until they faced Bryce Young and he went bonkers on them – throwing for 421 yards and 3 TDs. It should be noted that Cade McNamara is not Bryce Young.

By now you have probably heard of most of the cast of characters. The 6’6” DT Jordan Davis is a mountain of a man that anchors the interior of the UGA defensive line. Nakobe Dean and Nolan Smith are a great tandem at linebacker and the CB unit including Derion Kendrick and Kelee Ringo is bar none. Michigan has strung together a couple of impressive offensive performances of late but this will be their stiffest challenge to date.

As for the Wolverines, their defensive stats might not be as gaudy as Georgia’s but this is a rock-solid unit. DE Aidan Hutchinson has 14 sacks on the year and is destined to be a very rich man in the near future. His pass-rushing mate David Ojabo is no slouch either with 11 sacks on the season.

Michigan should be able to generate pressure on Bennett which could lead to a couple of turnovers. Perhaps more importantly, will they be able to stop the Georgia run game? My mind keeps going back to the MSU game where Sparty RB Kenneth Walker III ran for 197 yards and 5 TDs.

College Football Playoff: Georgia vs. Michigan Between the Lines

It’s a bit surprising both teams were not higher ranked in terms of turnover margin. As great as the UGA D was, they only generated 16 turnovers while also giving the ball up 16 times. In a close game, the team that wins the turnover battle just might grab the W. Additionally, both teams are well-coached in terms of penalties per game and both have solid kickers.

Being disrespected all season long, Michigan should have a chip on their shoulder entering the game. After all, they are the higher-ranked team but still a TD+ dog. On the other hand, getting whipped in the SEC Championship game should have a humbling effect on Georgia. Will they respond and more closely resemble the team we saw over the first 12 weeks of the season?

When it comes down to it, I believe the Georgia defense shows up in this game big time. Cade McNamara has had a fine season but he won’t be able to shred UGA as Alabama did. Georgia will bottle up the Michigan run game and come away with a potential rematch vs Alabama. The difference-maker might be the Georgia run game and Dalvin Cook’s little brother, James Cook.