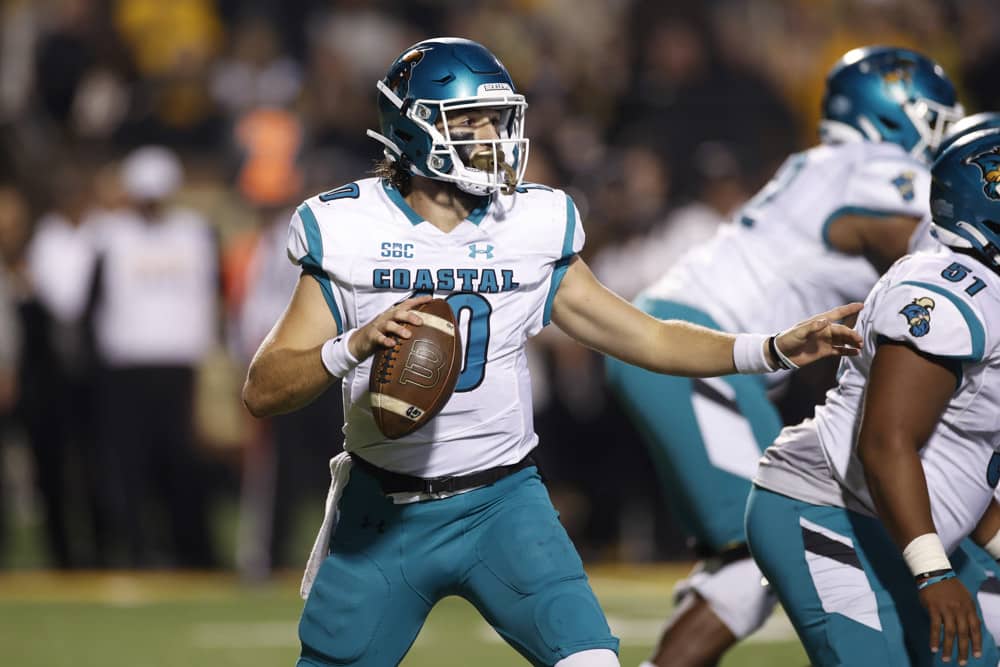 Welcome to College Football Bowl Season and our Bowl Games Picks. Now, the pessimists among us might point to the high amount of transfers, the player opt-outs, and the coaches who have already moved on to greener pastures and conclude that bowl games are now more meaningless than ever. While they certainly have a point, it’s still more football so what could possibly be wrong with that?

There’s still a point spread and total and how would you rather spend your holidays –– with your families? Not me. You know I’ll be glued to the tube watching every down of the RoofClaim.com Boca Raton Bowl. A bad beat in the Tropical Smoothie Café Frisco Bowl might just ruin my Christmas. That’s why we need these Bowl Games Pics.

If you are reading this column, you are probably right there with me. So let’s break out the egg nog, watch some crazy-named bowl games, and place some wagers. Here are my picks for the College Football Bowl Games on Friday.

The bowl season gets underway with a matchup consisting of the 6-6 MTSU Blue Raiders of the Sunbelt vs the 7-5 Toledo Rockets of the MAC. Rick Stockstill and Middle Tennessee deserve a lot of credit fighting through adversity this season and winning four of their last six to become bowl eligible.

NC State-transfer Bailey Hockman began the season under center but quit the team after being benched. Chase Cunningham took over and had the offense cranking before suffering a season-ending injury vs Southern Miss on 10/30. Since then, QBs Nick Vattiato and Mike DiLiello have split time with neither being overly impressive. After all, they started the year 3rd and 4th on the depth chart.

The most impressive victory, and the only one against a .500+ FBS team, came against Marshall back on 10/2. With the exception of that game, the Blue Raiders have feasted upon the bottom of the conference while generally being beaten badly by better teams. As you might expect from a team with QB issues, MTSU only rolls out the 99th best offense in the nation.

Toledo enters bowl season winners of 4 of their last 5 with all victories by double digits. Their three conference losses this year were by a combined eight points. Additionally, they hung around with Notre Dame in South Bend back on 9/11 before eventually losing a close one, 32-29.

About midway through the season, Dequan Finn took over at QB and he’ll lead an offense ranked 38th best in the country. It’s a balanced attack with RB Bryant Koback who ran for over 1,200 yards and 15 TDs. Somewhat surprising for a MAC school, Toledo also brings a solid defense that charts 33rd best in the country.

The one last nugget of information that may prove pivotal is that Toledo leads the country in the fewest turnovers, only giving up the ball six times this season. The Rocket offense should approach at least 30 points this game. If forced to go on long drives in order to put up points, MTSU won’t be able to keep up. I like Toledo to cover and win somewhere around 31-17.

In the evening game of bowl season’s opening day, the 10-2 Coastal Carolina Chanticleers of the Sunbelt square off against another MAC school, the 9-4 Northern Illinois Huskies. NIU is fresh off a 41-23 win over Kent State in the MAC Championship on December 4th. NIU came out of nowhere this year after going winless (0-6) a season ago.

In just his third year in DeKalb, HC Thomas Hammock has done an excellent job. Michigan State transfer, Rocky Lombardi, has been rock-solid at QB and RB Jay Ducker put up over 1,000 yards. The Huskies have a trio of fine pass catchers, primarily led by Trayvon Rudolph who has 877 yards and 7 TDs on the season.

As much as the offense has made strides this season, the Huskies defense has been an ongoing issue. Giving up 447.8 yards per game ranks 113th in the country while allowing 32.7 points ranks 107th. That’s not a good recipe for success going up against a Coastal squad that puts up over 40 points per game which happens to rank 7th best in the country.

The Chants limped to the regular-season finish line not looking overly impressive in their last three games. Sun Belt player of the year, Grayson McCall, was banged up and missed a couple of weeks including a loss to Georgia State, 42-40. He returned the following week vs Texas State but this was 7 point game going into the 4th quarter vs a team that finished 4-8. Finally, Coastal wrapped things up with an O.T win vs the 5-7 South Alabama Jaguars in a game that shouldn’t have been that close.

𝗕𝗔𝗖𝗞-𝗧𝗢-𝗕𝗔𝗖𝗞.@CoastalFootball redshirt sophomore QB @McCall_Grayson repeats as the #SunBeltFB Player of the Year after leading the nation with a 207.95 passing efficiency & throwing for 2,558 yards & 23 touchdowns. ☀️🏈

One major area of concern for Northern Illinois is if they can limit Coastal Carolina’s rushing attack that ranks top 10 in the country. RB Shermari Jones is a threat to take it to the house every time he touches the ball and should be primed for a monster game. The other offensive stars who should have a chance at playing at the next level are WR Jaivon Heiligh and TE Isaiah Likely.

Overall, Coastal is the more talented team but momentum sides with Northern Illinois. After the “Fear the Mullet” movement took over CFB last year, I’m not sure how pumped the Chanticleers will be to face a MAC opponent in Orlando. Considering they haven’t played since 11/26, they should be rested and healthy but will they also be rusty? This should be a wild game with momentum swings and lead changes. NIU’s magical story this season started with a win over Georgia Tech and will end with at least a cover.