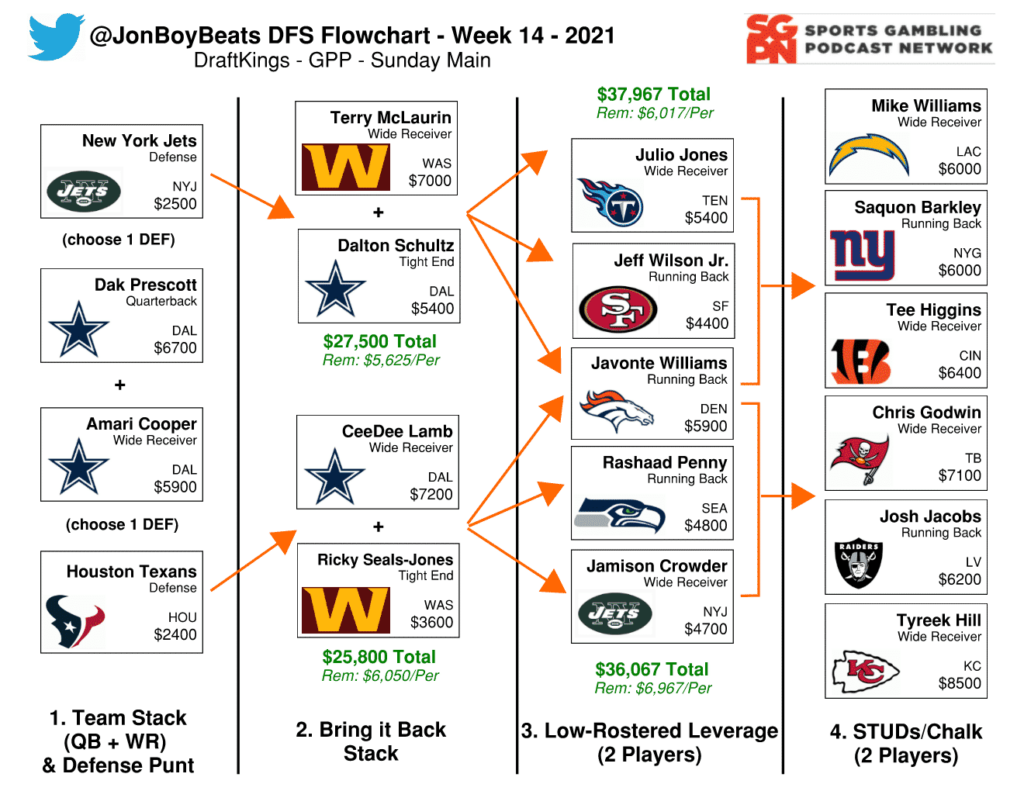 Unfortunately, I was out of service doing some camping last weekend so I wasn’t able to get out a Week 13 flowchart. We’ll keep the recap short and jump right into the Week 14 slate we have coming up. It’s a really interesting week because there are some very popular games in the late window. Buffalo at Tampa Bay has the highest total on the slate, while the Los Angeles Chargers are a value spot with no Keenan Allen. San Francisco at Cincinnati is also an enticing game in the projections, so the afternoon window could be action-packed. You guys know what this means, time to be thoughtful about the late swap on the Week 14 DraftKings Flowchart!

There are a couple of different ways that I like to think about playing late swap. The first one is to play a couple of high-rostered players early, and if the chalk hits, swap down to a very low-rostered player or two in the afternoon. The other way is to play it contrarian in the morning and if you are right then you can continue to play the chalk in the late window, and if not then you go extra contrarian and hope it’s an overall low-scoring week. We are choosing option two this week. Buckle your seatbelts.

The hype around the Dallas Cowboys has quieted down a bit recently. There have been a few injuries that have made the team tough to figure out in recent weeks, but it looks like all of Dak Prescott‘s weapons are going to be healthy this week. Let’s load up. Generally, when you see Amari Cooper below $6k that means he’s going to be a really popular play, however thanks to Hunter Renfrow and Mike Williams, Amari is going under the radar. If Tony Pollard can’t play tomorrow that likely means Ezekiel Elliott will be a popular one, so it will be great leverage to play the Dallas passing game. I love CeeDee Lamb this week and while Dalton Schultz‘s price tag is a bit higher than I prefer, I think he will get plenty of looks from Dak against Washington.

Across the board, the Cowboys will not be very high-rostered this week. Not only do they give us a great potential leverage spot pending the Pollard news, but they also allow us to jam in some more of the popular players in the backend of the flowchart. Speaking of leverage, let’s double down on it with Washington in the Week 14 DraftKings Flowchart.

There is potential that JD McKissic is ruled out for Sunday’s game, and if that happens Antonio Gibson will absolutely fly off projection sheets as a great play. This scenario is another reason why I love starting our lineups with Dallas. With Logan Thomas out, Taylor Heinicke will be able to get through his progressions quicker and should be slinging the rock to Terry McLaurin all day. Trevon Diggs has been a ball-hawk on defense this season, he doesn’t profile as a great coverage guy so I like McLaurin here. Ricky Seals-Jones should be on the field for close to 100% of snaps and there’s not much else you want from a low-priced Tight End.

If McKissic is out, and we play the Dallas and Washington passing games we are fully leveraged up. We can essentially do whatever we want the rest of the way. Conversely, since we started with a low-rostered Dallas stack, we can also sneak in some fun Antonio Gibson lineups (not included in The Week 14 DraftKings Flowchart) that are different than most of the field who may just be jamming him in as a one-off.

I’ve already talked about the massive leverage we gain targeting this DAL/WAS game. So I don’t have a big need to try and get too contrarian in this column. I am mostly looking for lower-priced players here who still project well. Since we aren’t carrying much cumulative ownership into this part of The Flowchart we can feel good loading up on some of the more popular plays. Julio Jones is the only above average skill position player that the Titans have so I am hoping he can stay healthy for the full game and knock on the door of double-digit targets. The Alex Collins healthy scratch last week makes me think that Rashaad Penny is in for a much larger workload than people assume in Week 14. He will be extremely contrarian so probably don’t fire him into any small field contests. Jeff Wilson Jr. is cheap and should be the workhorse for San Francisco, but we need to keep our eye on his injury status.

Javonte Williams and Jamison Crowder are two other guys who should see elevated opportunity due to injuries. For Williams, we are going to want to keep our eye on the Melvin Gordon news close to kickoff. If there’s any mention of Gordon be limited I love Javonte here. Crowder should be the #1 option for Zack Wilson on Sunday. That sentence in itself doesn’t exactly inspire a lot of confidence, but the $4700 price tag does help.

I tried my best to fit a couple of late-game players into this last column to give us that swap flexibility. I’ll start off with Saquon Barkley and Mike Williams mini stack, and talk through options here. Williams will probably be the highest rostered receiver tomorrow. Saquon should be decently popular due to his $6k price tag. If we don’t hit on everything we think we will in the morning, then you will want to get off Williams for Brandon Aiyuk or Jerry Jeudy in the late games. Barkley should be plenty contrarian where you probably wouldn’t need to swap off of him.

Next up is Chris Godwin, who is absolutely on fire in this Bucs offense lately. Similar to Williams he will be popular, so late swapping to Ja’Marr Chase or even Mike Evans will be the “break glass in case of emergency” options there. I love the little Josh Jacobs and Tyreek Hill mini stack that is able to fit into a few lineups on the bottom half of The Flowchart. If Jalen Richard is out on Sunday, Jacobs’ floor jumps quite a bit higher, and it’s really fun to pair that with the ceiling we know Tyreek Hill has.

Good luck this week everyone! Hope to see you at the top of some leaderboards.