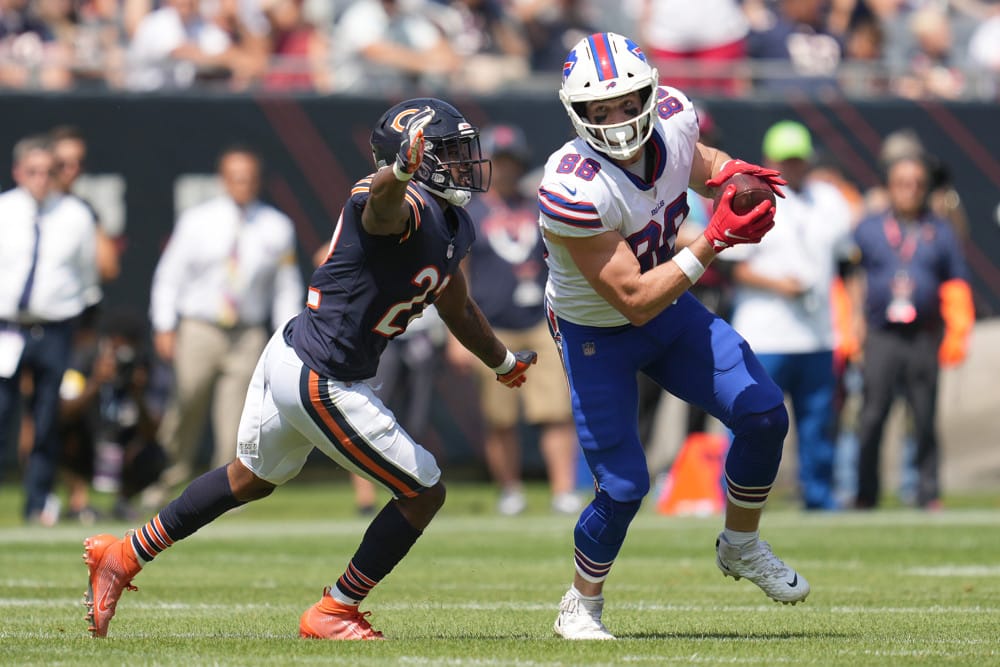 Welcome to the Top 10 DFS stacks article where I will be breaking down the DraftKings main slate to identify my top 10 DFS stacks for Week 14. Stacks in DFS can be defined as; playing two or more players from the same team in a single lineup. Stacking in DFS contests has become the predominant roster construction strategy particularly for GPP tournaments, with a variety of unique and creative ways to build stacks and maximize your scoring upside each week. The most popular stacking options include the skinny stack, the double-stack, the run back stack, and the full-on game stack, and the running back paired with a defense stack.

The Washington Football Team ranks 32 against quarterbacks, giving up 23 points per game. Dak Prescott‘s Week 14 price tag is juicy at only $6,700. I’m stacking Dak with CeeDee Lamb at $7,200 and running it back with Washington’s top offensive weapons, Antonio Gibson ($6,000) and Terry McLaurin. Lamb is Dak’s top target, amassing a 32% target share in Week 13. Paying down for Cooper is an option, but Lamb has the highest ceiling.

Antonio Gibson has feasted on the Dallas Cowboys, scoring three touchdowns last Thanksgiving in Dallas. Gibson is averaging 26.5 touches per game over the last four weeks. Trevon Diggs has been one of the best cornerbacks in 2021, leading the NFL with nine interceptions. Terry McLaurin roasted Diggs last year in Washington last season, scoring and averaging 19 DraftKings points per game. This matchup should be extremely entertaining, with points scored on both sides. I am comfortable rolling this game stack out in higher steaks smaller field GPP tournaments.

Dak Prescott when asked about Mike McCarthy saying he expects the Cowboys to win Sunday at Washington: “Shit yeah.” pic.twitter.com/lwK7igRqfq

The last time Patrick Mahomes and the Chiefs faced the Las Vegas Raiders, he passed for five touchdowns, 406 yards, and scored 39 DraftKings points. I love stacking Mahomes with his favorite target Tyreek Hill ($8,500). Hill has been averaging 11 targets per game the last five games. The Raiders couldn’t stop Hill in Week 10, giving up two touchdowns and 27.5 points. Running the Chiefs’ stack back with Josh Jacobs at only $6,000 makes sense in this matchup. Jacobs caught nine of nine targets last week and has 30 targets the last six weeks. Jacobs’ emergence in the passing game only took the better part of three NFL seasons, but it comes at a perfect time. I’m stacking up this run-back stack in small to medium field GPP tournaments.

Last week the Tampa Buccaneers side of this stack was my top stack for Week 13. here at the Sports Gambling Podcast Network. The trio combined for over 80 points. This week the Buccaneers and Bills have the largest team total on the board at 53.5. Each team is expected to score over 25 points in this matchup, meaning that offensive fireworks are expected. Chris Godwin is priced up to $7,100, but after 15 receptions on 17 targets in Week 13, I’m surprised his price isn’t in the mid-7K range. Rob Gronkowski proved once again to be Tom Brady‘s favorite red-zone target, catching two more touchdowns last week. Gronk is a monster and is priced up to $6,000. Hopefully, this scares enough people off of him to provide some leverage over the field.

Running it back with a Bill’s passing duo with high-upside makes the most sense if this game is going to shoot out. After a slow start, Stefon Diggs has been averaging 19.2 DraftKings points in his last seven games. With a top 10 PFF matchup, Diggs should see plenty of work. Dawson Knox is a pivot from Cole Beasley, who is also priced at $5,000,  but doesn’t have the red-zone upside. I’m running this full game stack out in a medium single-entry GPP field.

1st among all TEs 💪 pic.twitter.com/OUxgaCQISh

The Chargers are going to destroy the New York Giants this week. I’m building an on-slaught lineup. Justin Herbert is averaging 30.8 points per game the last three weeks. He’s been on fire, to say the least. This week he will be without his top target, Keenan Allen, who was placed on the NFL COVID-19 list. This opens the door for a reasonably priced Mike Williams at only $6,100. Heading into Week 14, Austin Ekeler leads all running backs with 71 targets and he’s the second leading DraftKings running back, scoring 260 points. The Chargers will lean on Ekeler in this matchup against a Giants’ defense that ranks 26th against running backs, giving up 26 points per game. This stack plays in all formats, but I absolutely love it in Cash games. The Chargers’ trio could be one of the best stacks to build around in Week 14.

George Kittle is the TE1 since he came back a month ago. Last week he was electric, catching nine of 12 for 181 yards and two touchdowns. He scored 42.6 DraftKings points. $6,900 is sexy. I’m game stacking him with wide receiver Brandon Aiyuk at $5,800. Deeboo Samuel is yet to practice this week. Jeff Wilson and Elijah Mitchell are both questionable with knee issues and Mitchell has a concussion on top of that. The game total is set at 49. Points will be scored and it looks like it might need to be through the air.

The highest-upside play, and the most expensive, is Ja’Marr Chase at $6,900 to Tee Higgins‘ $6,400. Higgin exploded last week, scoring over 30 DraftKings points and paying off. This week both Bengals wide receivers have top-rated PFF matchups against the 49ers’ secondary. I’m comfortable playing them both, but Chase will be the leverage play. I’m playing this stack in large field GPP tournaments.

Russell Wilson and D.K. Metcalf drama notwithstanding, both are way too cheap this week at $6,600 and $6,500 respectively. Russell “Mr. Unlimited” Wilson is facing a Texans’ defense that gives up 35 points per game to wide receivers. He should have his pick of options between Tyler Lockett and Metcalf. There is no one who can physically match up with Metcalf on the Houston Texans. He should run wild. You don’t have to run it back with Brandin Cooks, but $5,700 is a value for a wide receiver with 98 targets on the season. I’m comfortable playing this stack in smaller tournaments.

This DK Metcalf situation has broken all of our Bible Narrative models. pic.twitter.com/a9jsrOrXlY

The rare double running back/running back run-back stack with Ameer Abdullah and Cordarrelle Patterson. The value this stack provides is what I am after. The Carolina Panthers are going to target their running back, it’s what they do. Don’t let one poor Cam performance scare you. He has years of scary performances if you really care to know the truth. The Atlanta Falcons defense is terrible. Both teams should be able to score points. Patterson has been the best player on the Falcons by a mile, averaging 18.1 DraftKings points. I’m rolling this stack out in Cash and in larger field GPP tournaments. This is not one of the more traditional stacks, but these two backs can carry you to a win in Week 14.

Javonte Williams scored 32.8 DraftKings points last week in Melvin Gordon‘s absence. Gordon is back this week, but Williams is the fully healthy back, so look for him to command more touches. The Lions have surrendered 18 touchdowns and over 1,700 total yards to running backs. Williams priced at $5,900 is a value this week. The Lions one of the worst offenses in the league, scoring over 20 points only twice this season. I expect the Broncos to run over them and for their defense to swallow Jared Goff alive. Stacking is just playing good football and this is one of the best stacks around in Week 14.

Lamar Jackson is coming off two of his worst weeks as a professional quarterback. I don’t expect his frustrations to continue this week. The Browns are rested and coming off a bye and a four-interception performance from Lamar in Week 12. Expect the Ravens to run the ball and focus this passing attack on Mark Andrews, who has been averaging 9.4 targets over his last five games. One of the best overall values/plays on this weeks’ slate according to RunTheSims.com, is Jarvis Landry at only $5,400. The total is only 43 points, so look for most DFS players to be off this game, meaning that there is leverage to be gained by playing Ravens and Browns. This game might look like a slug-fest, but there are plenty of stacks to use in this Week 14 rivalry matchup.

Julio Jones has been a huge disappointment this season, but priced at only $5,400, has a chance to smash in his return. This stack is for the gunslingers who roll deep, I wouldn’t be comfortable playing this stack anywhere, but I will be playing in larger field GPP tournaments. Sometimes stacks require a bigtime risk and here’s a fun one to ride with in Week 14.

.@juliojones_11 was back on the practice field on Thursday for the @Titans. pic.twitter.com/Ef2TRzGOoS