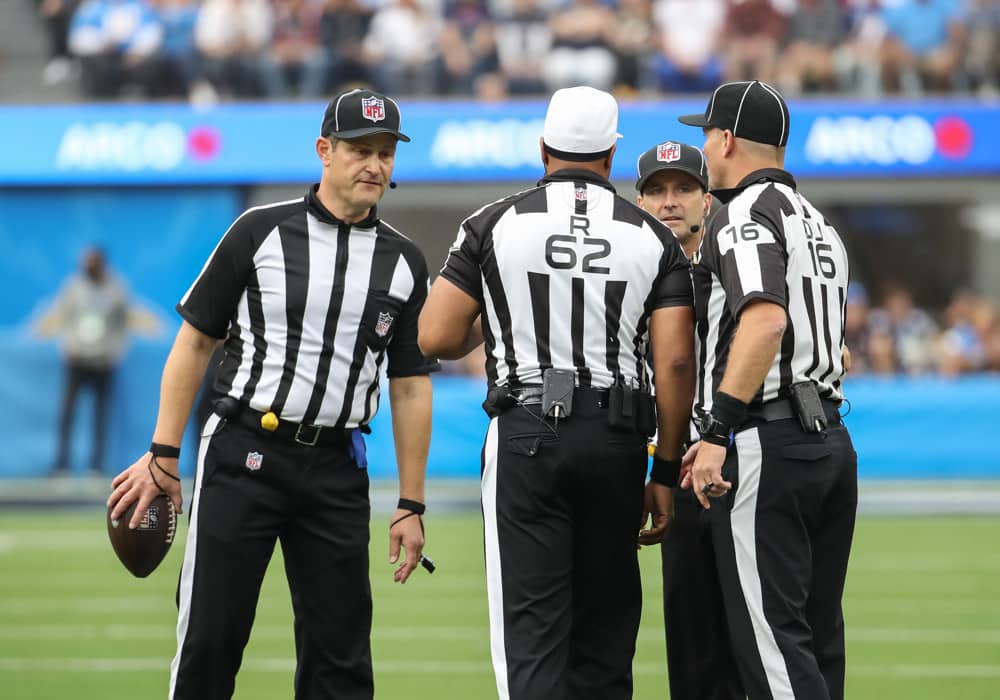 Another NFL week in the books and another week of NFL Referee controversy. Plenty of out lash coming against Tony Corrente after the Monday Night Football debacle and penalties against the Bears. However, the road team, the Bears, did cover the number against the Steelers. Week 10 returns a few of our profitable referee trends after a week off. Let me dive into the NFL Week 10 Referee Betting Trend and Stats report!

Tony Corrente has Steelers -7, no doubt about it
pic.twitter.com/3fWV3FcGgT

After having Week 9 off, Ron Torbert returns to the field this week. Thus far this season, Torbert is one of a few NFL referees who is a cash cow to the Under. In fact, Tobert is 6-2 to the Under with an average combined final score of 42 points. This week, Torbert is assigned to officiate the Thursday Night Football game between the Baltimore Ravens visiting the Miami Dolphins. Furthermore, the Dolphins are 5-2 to the Under in conference games this season.

Clay Martin is another referee who is profitable and a cash cow to the Under. In fact, Martin is 6-1 to the Under with an average combined final score of 42.3 per game. In Week 10, Martin is assigned to officiate the game between the Minnesota Vikings and the Los Angeles Chargers. I would recommend being cautious with an Under in this game because the Minnesota Vikings are a perfect 4-0 to the Over as an away team exceeded the total by 12.5 points. Something has to give here!

After taking a week off Shawn Hochuli “first ballot #DegensOnly” hall of famer is back in action this week. Week after week I have backed the road team in Hochuli officiated games and it continues to cash. In fact, in the eight games officiated by Hochuli, the road team is 7-1 straight up and 7-1 against the spread. Additionally, Hochuli is a referee who has lower scoring games. Like his counterparts Clay Martin and Ron Torbert, Hochuli officiated games are 6-2 to the Under with a combined average final score of 41.8 points per game.

In Week 10, Hochuli is assigned to officiate the game between the Philadelphia Eagles and the Denver Broncos. Additionally, Hochuli has officiated one game this season involving the Eagles which was in Week 5. As a result, the Eagles who were the road team against the Panthers won and covered the game as a road underdog.

Need help with who to bet on this week? Check out the latest NFL expert picks.

Ahh yes let’s say the best for last shall we. Tony Corrente and his crew are coming off an atrocious game called on Monday Night between the Bears and the Steelers. Nonetheless, the Bears, as the road team, covered the spread and nearly won the game. As a result, road teams improved to 6-2 against the spread. Additionally, road underdogs are a perfect 5-0 against the spread in games officiated by Corrente. In NFL Week 10, the road team will need all the help they can get from Corrente, as the Jacksonville Jaguars visit the Indianapolis Colts. 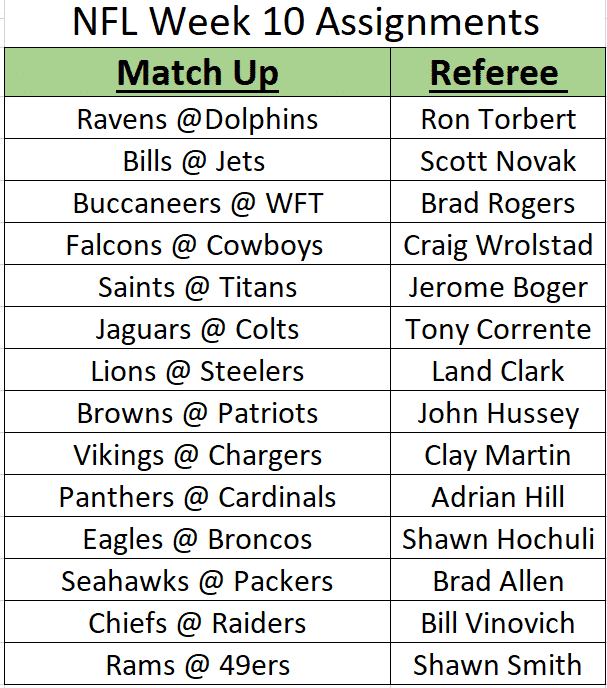