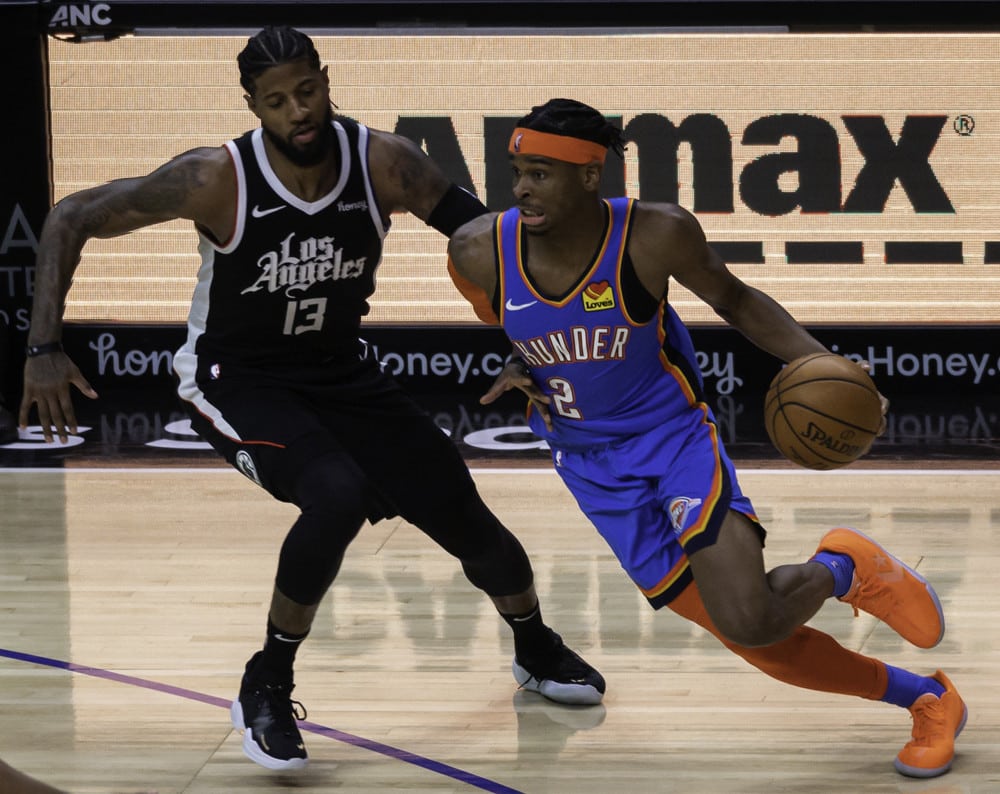 Thursday has turned into one of the best nights for basketball. Sure, we don’t have the full slate of games on, but we do have some awesome primetime matchups ready to go. Plus, it’s our favorite night to give you the NBA DFS lineup that is going to get you in the green and make you some green in the process.

(NOTE: This NBA DFS lineup was made early and therefore may not reflect the latest news or injury statuses. You should always check for the latest injury news before your lineup officially locks. )

You might be surprised to see that I’m riding with a number of guys for this NBA DFS from the Thunder. After all, they just so happen to be 29th in average points per game in the NBA and sporting a 1-6 record. However, they’re playing the Lakers, who are 25th in the NBA in points allowed. They also gave the Thunder their lone win and allowed them to put up 123 points on them. While I don’t expect the Thunder to repeat that performance, I do think their guys are all undervalued here. Especially their leading scorer in all seven of their games so far.

Giddey is one of those NBA DFS plays that I like because he is not at all scoring dependent. Only once this season has he failed to lead the team in either rebounds or in assists and often he’s getting involved heavily in both. He’s slowly turning into a star in the league and for DFS. He’s had at least 25DK points in each of his last five games and has scored 38DK points or better in three of those.

Despite a recent foot injury, Collins seems to be developing into an even more dangerous weapon than he already was. Collins is always going to get you the points and boards – he nearly averages a double-double. However, the upward trend on his assists and steals gives you all the reason to believe that he can really put up an absurd number this Thursday.

As far as low-priced options that you can find, McGee is one of the better ones. In each of the last four games he’s played, his number of minutes has increased. He’s now nearly at 20 minutes per game. With the way he pulls down boards when he is in there and his ability to get to the line, he should be a lock for around 20 points. At that cost, it’s hard to turn that down.

Chris Paul has followed up his big year last year with another great start. He’s already cracked 50DK points twice this year. This is largely due to the fact that he has a base of around 13 dimes a game. So anytime that Paul goes out and starts scoring, you can expect him to overachieve based on his price. Playing Houston, who is pretty bad this year, should make it so that he can get some buckets here and catch fire.

For a lot of these picks in this lineup, I’ve looked for people who might score way above what you might expect of them. Bogdanovic is not one of those picks. However, he does give you a steady 20-30DK points every time out. He’s extremely reliable when it comes to that year after year. I like having a guy or two like that in the lineup to get the total started.

That’s right, I snuck one more Thunder into this NBA DFS lineup. Let all the Laker fans get mad now, but I do think they have some upside tonight and Bazley is one of the best picks. Twice in the last three games, he’s gotten red hot from three-point. In those contests, he went three of eight and four of eight, respectively. The better of those two shooting days, you guessed it, was against the Lakers.

Make sure to check out all the great NBA coverage we have to offer and be sure to listen to the NBA Gambling Podcast, which airs three times a week. This week the guys are giving you all their favorite plays for this week.