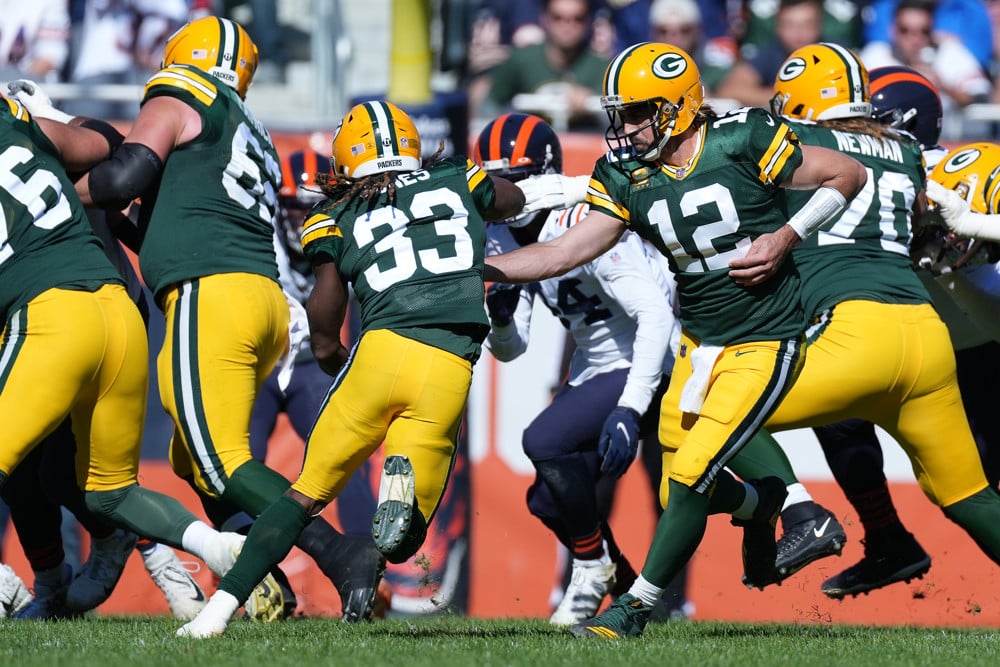 The profitable winning streak came to an end on Sunday Night as the player props ended up going 1-2. However, I am still firing at 60%+ on player prop bets for this NFL season. Thursday Night Football features a battle for bragging rights in the NFC. The undefeated Arizona Cardinals will host the Green Bay Packers.

Currently, the Packers are dealing with a COVID situation with a couple of their wide receivers including their star receiver Davante Adams.

This number opened at 92.5 and is climbing up to 96.5. I do not understand why this is not much higher. First, we know about the COVID situation to the Packers wide receivers and now the offensive output will depend on Aaron Jones. Additionally, the Cardinals rush defense is one of the worst in the league. In fact, they are ranked #31 in yards per rush attempt. It is possible we see more running against the rush defense with Aaron Jones. Furthermore, Jones gets targets in the passing game also. Over the last four weeks, Jones has seen 18 targets which has resulted in 111 receiving yards. I love this player prop to go over the total.

As bad as the Cardinals’ defense is against the run, so is the Packers. In fact, the Packers rank #30 in opponent yards per rush attempt and rank #22 in opponent rushing yards per game. Additionally, Chase Edmonds has gone over this number in five of the seven games so far this season. Kyler Murray has been dealing with a shoulder injury and now also a hamstring injury. How do we reduce the risk of Murray going down? Let’s run the ball with Edmonds and Conner.

Kyler Murray is battling a shoulder injury and a hamstring injury coming into the Thursday Night game against the Packers. In addition, over the last three weeks of the season, Murray has rushed for a combined 20 times which has resulted in a total of 17 yards. Furthermore, I believe this is a game where the Cardinals don’t want to risk further injury or the severity of the existing injuries. Cardinals will have 10 days off before a divisional game next Sunday against the 49ers. I believe the Cardinals will leave the running responsibility to James Conner and Chase Edmonds, and Murray will throw the ball away rather than scramble for yards. Give me the Under on this player prop bet!