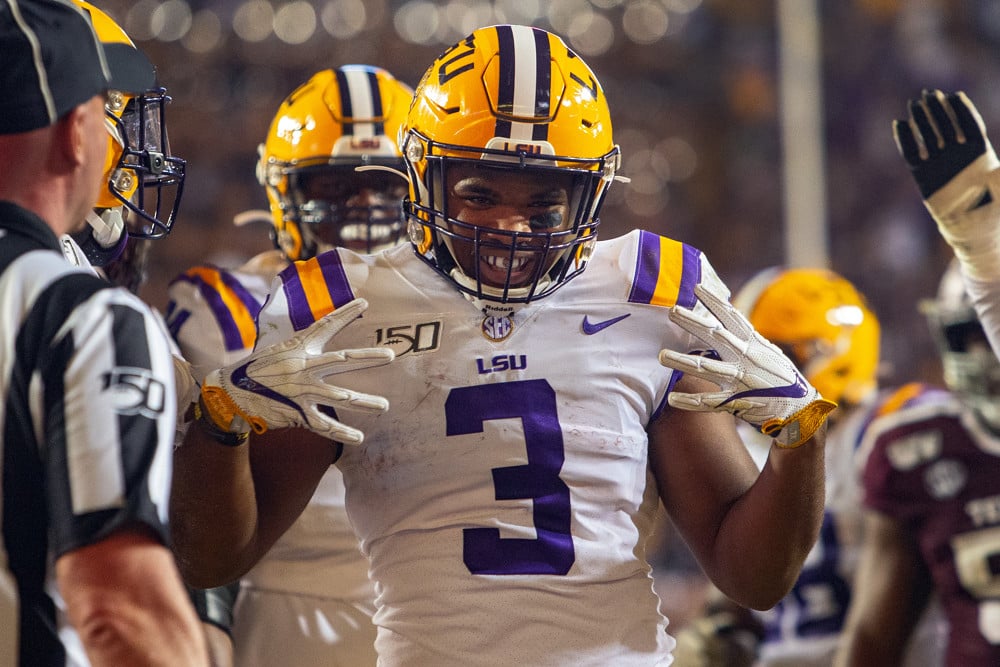 Week 8 already! It’s crazy to think we’re about at the midway point of the College Football regular season. While I had some hits and misses among my picks last week, highlighting Tyrion Davis-Price for only $4.4 is one to remember. The LSU RB broke a school record, running for 287 yards and 3 TD vs the Florida Gators.

Let’s do it again, shall we? As usual, for each position, I will highlight my favorite expensive option, my favorite middle-of-road option, and my favorite bargain bin player.

First things first, I am not a fan of the QB position in DraftKings main slate this Saturday. Matt Corral is priced at an astronomical $10.2K and is banged up and questionable to play. Caleb Williams is also extremely expensive ($9.8K) and the Sooners may not need to pass the ball in a potential blowout game vs Kansas. Other expensive QBs like Desmond Ridder ($8.9K) and Kenny Pickett ($8.4K) don’t have great matchups and/or could fall victim to negative game scripts.

With that said, I have to include someone in this section of my column so Dorian Thompson-Robinson it is. DTR has been a model of consistency this season, ranging from 21 to 33 fantasy points each game. While UCLA lacks weapons on the outside, their senior QB’s dual-threat abilities provide a very safe floor. Plus, Oregon gives up 270 yards per game on the ground which ranks 110th in the nation.

Speaking of consistency, Sam Hartman has been a very dependable source for fantasy production this season. In fact, the Demon Deacon signal-caller has put up two straight games of over 30 points. Wake Forest is undefeated and the offense is firing on all cylinders.

So while I like Hartman, here’s the potential issue: Wake’s opponent this weekend is Army, who leads the nation in time of possession. Their plan is to play keep away and limit Wake’s offensive possessions. Furthermore, Army has the 7th best defense in the nation only giving up slightly over 200 passing yards per game. Hartman is a safe play but his upside is limited.

Ok, finally a QB I like this weekend at a price I absolutely love. Other than the game where Skylar Thompson went down with an injury, the Wildcat QB has been north of 20 fantasy points every week. This includes touch matchups vs Stanford, Oklahoma, and Iowa State.

K State travels to West Texas this Saturday to play a Texas Tech squad that should give up yards and points. With an O/U sitting at 60.5 , this Big 12 showdown should be one of the more high-scoring affairs on the slate. Thompson will find himself on most of my lineups this weekend.

This Cincinnati ground game is rolling and Jerome Ford is quickly making people forget about Gerrid Doaks. The Alabama transfer just had the game of his life, running for 189 yards and 4 TDs vs UCF. A repeat performance will be tough, but the Bearcats know they need to impress the playoff committee so they’ll keep their foot on the gas vs Navy.

Maybe it’s not the best matchup in the world, but Ford is a volume play who’s a safe bet to produce. He’s $1.1K cheaper than Breece Hall who’s playing the 16th best Rush D in the country and he’s $300 less than Kennedy Brooks who might only play a half vs Kansas.

For a guy who just broke LSU’s single-game rushing record, Tyrion Davis-Price is still affordable this week and LSU plays an Ole Miss team that’s ranked 109th in Rushing D. That’s right – TDP now has the record over previous Tiger RBs such as Leonard Fournette, Derrius Guice, Joseph Addai, and even over the famous LaBrandon Toefield or the immortal Harvey Williams.

In all seriousness, Coach O has focused on the run game the last couple of weeks and TDP is getting all the carries. At this price, and against this opponent, you have to roster the LSU tailback.

Apparently, it doesn’t matter who’s playing RB for the Golden Gophers, they’re gonna produce. Mohammed Ibrahim ran for 163 and 2 TD’s vs Ohio State before getting hurt. In came Trey Potts who put up three consecutive games over 100 yards before going down with an injury. Now it’s the third-stringer’s turn and in Bryce Williams’s first game as a starter vs Nebraska last week, he ran for 127 yards and a TD.

Minnesota squares off against Maryland – a team that has given up 117 points in its last two games (vs Iowa and Ohio State). In last year’s matchup between these teams, Ibrahim ran for over 200 yards and 4 TD’s. I expect another strong performance by the Minnesota ground game.

Much like the QB position, I’m not enamored with the high-dollar receivers in this slate. I plan to spend up big at RB and go with cheaper options at QB and WR. However, David Bell is an attractive option at $7.6K. I’ve been singing his praises for a couple years now and the Boilermaker wideout had quite the game vs Iowa last weekend. Bell caught 11 balls for 240 yards and a TD. Apparently he has a history of blowing up vs the Hawkeyes:

Let’s not expect a duplicate game this Saturday, but Bell will continue to produce. Purdue certainly doesn’t have a great matchup vs Wisconsin but we just saw what this offense did in Iowa City.

Here’s another guy that I’ve been talking highly of for a couple of seasons. Jaquarii Roberson had a slow start to 2021 but in the last three games, the junior wideout is averaging more than six catches and 120 yards per contest. I’d expect the momentum to continue against Army.

Oklahoma distributes the ball to a number of pass-catchers so it’s difficult pinpointing which will have the best day any given game. However, with Caleb Williams at the helm, this offense is really opening up. It makes sense to roster Sooners and Michael Woods is second on the team in catches and yards and is dirt cheap.

Last week, the Arkansas transfer caught 3 balls for 75 yards. Not a bad day and certainly worthy of the low price tag but Caleb Williams just barely missed him on a couple of bombs. It was almost a monster day for Michael Woods. I’ll gladly roll the dice again on a receiver with that talent on an offense this dangerous.