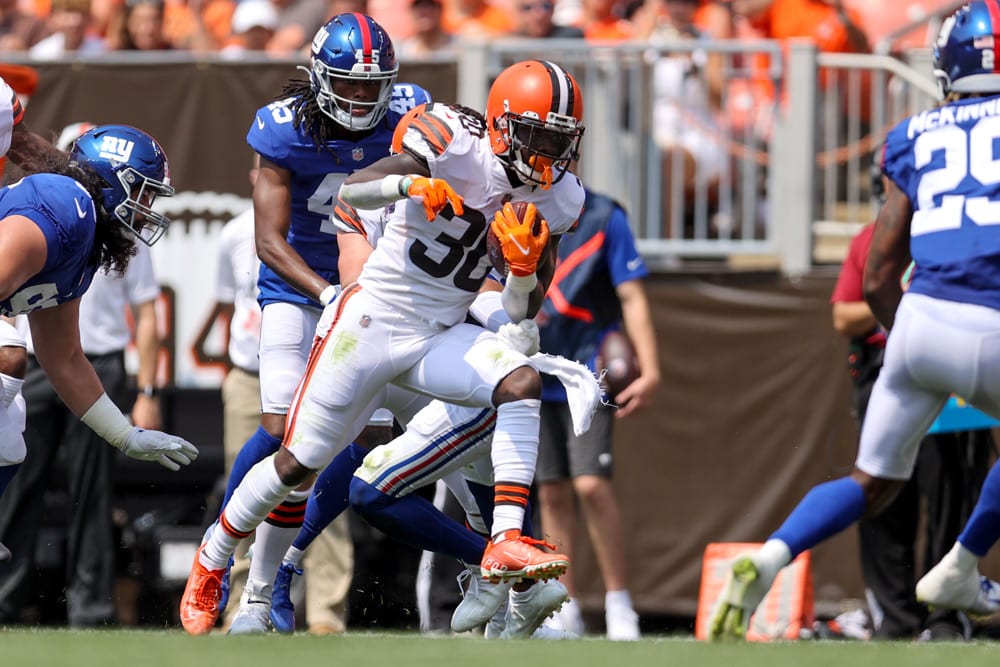 On the surface, this Week 7 NFL Thursday Night Football game should be played at a hospital. Basically all of the higher priced players carry an injury designation with them. Both sides have sustained some major injuries to key offensive players. That will certainly play a huge part in who to play this week as the obvious names are not that obvious this time around. So with that in mind, here are a few suggestions to help you salvage together a serviceable DraftKings lineup for this week’s game.

Unless you are a hardcore Broncos fan, Tim Patrick may not be a name you know all that well. Much of that has been because of his dismal quarterback situation throughout his young career. Another contributing factor is that he’s been overshadowed by fellow pass catchers, Jerry Jeudy and Noah Fant. Despite his position on the receiving pecking order, Patrick did manage to post respectable numbers last season. He amassed 742 receiving yards with six touchdowns on top of them. So far this season, he seems to be on pace to at least equal if not eclipse that mark almost halfway into the season. Last week, he found the end zone on one of his three receptions. Jeudy is still questionable and just about every other Denver pass catcher is on the injury report. It could be that Patrick and Courtland Sutton are the only trustworthy receivers come Thursday.

Broncos WR Tim Patrick has gone 127 targets without a drop.

Simply put: one of the most underrated receivers in the NFL. pic.twitter.com/bvi39E6B43

It may not seem like an ideal week to roster a Broncos wideout given the fact that Teddy Bridgewater’s status is up in the air. To be fair though, just about everyone in Denver has some type of injury tag attached to their names. What’s more, Denver will be facing a stingy Cleveland pass defense. That is not to say they are not without cracks. Last week, both Chrisitan Kirk and A.J. Green accumulated at least 75 yards and a touchdown against them. Should the Browns manage to lock up Sutton, the door is open for Patrick to turn in his third double digit fantasy game in a row. If he does, it will be his sixth of the season. Keep an eye on the practice report for this one.

The presence of Melvin Gordon has made it difficult for Javonte Williams to stake his claim in the Denver backfield. The rookie has shared the backfield with his veteran teammate in almost a full 50/50 split all season. It might seem frustrating, but in reality it actually gives both of them equal value at a modest price discount. So far this season, he’s seen double digit touches in every game. This includes his 15 targets so far in the passing game of which he’s caught every single one. If nothing else, you can count on Williams for his consistent floor of somewhere around eight fantasy points per game. It could also be encouraging that we have yet to see his ultimate ceiling. The potential for that could come this week in Cleveland.

More than a few names appear on the Denver injury report this week. Among them are Melvin Gordon who finds himself once again with a questionable tag heading into this game. While it was pretty much a non-factor against Las Vegas, it still deserves some attention. The Broncos do not draw the most running back friendly matchup either. Cleveland is one of the better defenses in the league against the run allowing an average of only 87 yards per game. Although, that trend has shifted in the opposing running rushers direction as of late. The Browns surrendered 131 combined rushing yards to the Arizona running backs last week. Hopefully, you can squeeze a decent double digit fantasy point performance out of Williams. If you do, your Week 7 NFL Thursday Night Football lineups will benefit greatly.

Last week, Donovan Peoples-Jones enjoyed a career day. With just about every other able bodied pass catcher dinged up, DPJ reeled in four of his five targets for 101 yards and two touchdowns. There isn’t much more to his young resume that would offer much confidence in this pick. That said, on a team decimated by injuries, anyone that is not hampered by one is a valuable commodity.

DPJ trucked his way in the endzone 😤

As such, Peoples-Jones has posted back-to-back weeks with double digit fantasy production. In that span, he’s seen 11 targets, catching 9 of them in total. There is a chance that both Odell Beckham Jr. and Jarvis Landry are cleared to play this week. Of course, neither are a full strength, and neither have been full participants in practice, simulated or otherwise. This slate could end up with you having to just roster anyone who is healthy. In that case, it seems wise to put your money on the player who has been trending in the right direction.

Cleveland truly fought in a war of attrition last week against the Cardinals. Among those lost in that battle was Kareem Hunt who fell late in the third quarter with a calf injury. Already without Nick Chubb, that left Demetic Felton and D’Ernest Johnson to assume running back duties. Of course, that situation only lasted for four total plays in the fourth quarter. That said, in those four plays, Johnson got the lone carry. He’s the more experienced of the two remaining ball carriers and what’s more, is the only one who has an actual NFL rushing attempt. So far Felton has eight catches for 90 yards and a receiving touchdown on his professional resume. Those who loved Johnson from his time with the AAF and the Orlando Apollos know his big game potential. They are also hoping they get a chance to see that Thursday night.

Stefanski on RB D’Ernest Johnson’s strengths as a runner.

This slate is shaping up to be an ugly one. With that in mind, getting what could be the starting running back on a team with an injured quarterback could be a winning play. Rostering Johnson does not come without risk. Even stii, there are almost no healthy players left in this contest that are completely safe. In a situation where you are forced to start any warm body, Johnson is just that. Proceed with caution, but proceed nonetheless.