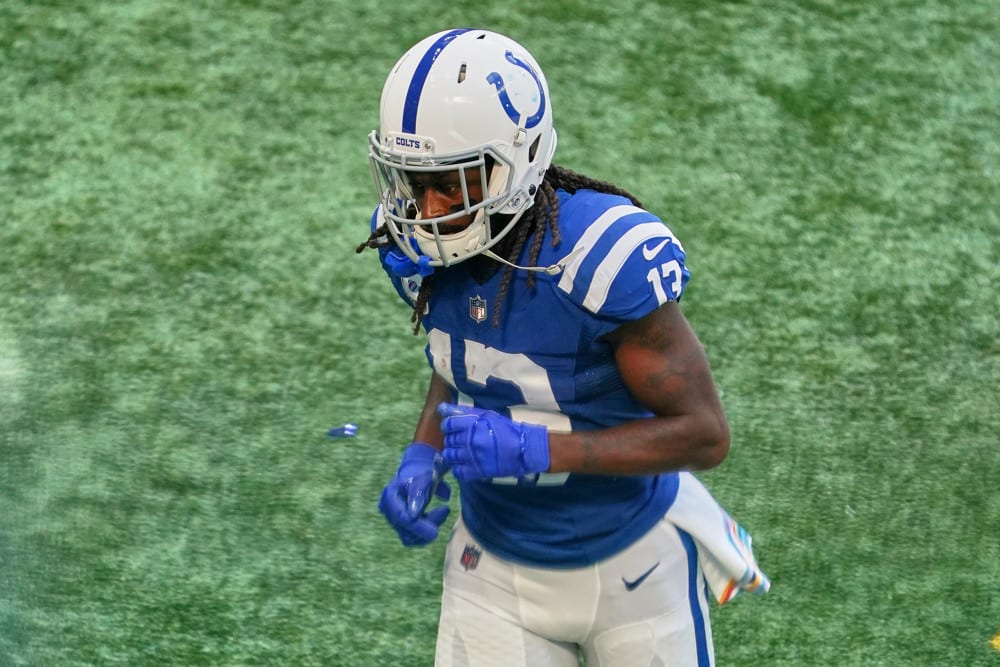 After six weeks of NFL Football, we have officially completed the first third of the season. At this point, you’re probably starting to see how your team shapes up. From here on out trades and waiver acquisitions will define the rest of your team’s season. So if your team has yet to live up to expectations you’ve come to the right place to turn things out and make a playoff push in these last few weeks of the Fantasy Season. Here is your Week 7 FAAB and Waiver Wire Guide.

Perhaps one of the biggest surprises of Week 6 was JD McKissic. McKissic had 16 touches, totaling 110 yards and 8 receptions. While the bulk of his production came in garbage time there is still reason to believe we could see a repeat performance. Washington’s primary back Antonio Gibson entered week 6 as questionable with a shin injury and while he did ultimately play, he left the game after reaggravating it. Gibson is set to undergo an MRI on Monday and if he ends up missing time McKissic could end up in the RB2 conversation going forward. Depending on the severity of Gibson’s injury I would go up 20% of FAAB on McKissic, with him still having some value even if Gibson plays next week.

T.Y. Hilton made his season debut this week in which he caught all 4 of his targets for 80 yards. While this was not an incredibly stunning debut I still think Hilton could be worth an add. Over his ten-year NFL career, we have seen Hilton be extremely productive when he is able to stay healthy. Additionally, with the improved play of Carson Wentz, I think Hilton could have an extremely high ceiling and find his way into flex contention. I think I would be comfortable spending around 15% of your Week 7 FAAB on Hilton this week.

Next on the list is a guy many people have forgotten about: Michael Gallup. Gallup exited the Cowboys’ Week 1 game with an injury after receiving 7 targets in the game. Even in a very talented Dallas Cowboys offense, I see no reason why this production should not continue. When Gallup was added to IR in Week 2, his earliest return would have been week 5. However, with the team heading into a bye in Week 7, they decided to hold him out this week, likely for him to return in Week 8. If Gallup was dropped in your league he is certainly worth nearly 15-20% of your FAAB and could find his way into your starting lineup.

Donovan Peoples-Jones put up 101 yards and 2 touchdowns on 4 catches this week. While the fact that this was only on four catches, marked his second straight week with an uptick in production. After receiving 6 targets against the Chargers last week Peoples-Jones was targeted 5 times this week, potentially indicating a possible relationship forming. It is important to note that Odell Beckham Jr. did return after suffering a shoulder injury and Jarvis Landry will likely return next week. Even with Peoples-Jones likely being demoted to WR3 when Landry comes back I’m still intrigued by this uptick in targets. I would consider the 2nd year receiver to be a low-risk high reward pickup for around 5% of your Week 7 FAAB.

Cass Tech’s Donovan Peoples-Jones made a Hail Mary grab to end the first half. Crazy. [2/2]

The Seahawks are starting to look like the Ravens in that they just cannot catch a break at the running back position. After seeing Chris Carson struggle with injuries this year, Alex Collins went down on Monday Night Football. While the status of Collins’ hip and glute injuries are still up in the air, it is noteworthy that he did not return to the game. While DeeJay Dallas and Travis Homer carried the ball for the rest of the game, I would lean towards adding Rashad Penny over both Dallas and Homer. Penny is set to come back from the IR this week after being held out with a calf injury. While Penny has struggled to find prolonged success so far in his career, I think this could be the perfect spot for him. With Geno Smith under center last night we saw the Seahawks really lean on the run game and I would expect this to continue. Spend about 10% of your FAAB here.

Tarik Cohen finds himself in a similar spot that Penny does, with the team’s starter out and set to return from the IR next week. Cohen has found himself some success thus far in the NFL but hasn’t played a snap yet this season. In his 4 year NFL career, over 51 games Cohen has been extremely productive in the passing game, with 4 catches per game. Overall there is no reason to expect this not to continue, especially with a rookie QB under center. With David Montgomery out at least another week another 2-3 weeks Cohen could see a fairly heavy workload and is worth about 7% of your FAAB.

Tight end is often one of the hardest positions to find production in Fantasy. For those currently struggling to find a replacement due to byes or injury, look no further than Ross Dwelley. While Dwelley only has 3 catches on the year for 45 yards and a touchdown, he is not slated to be TE1 in San Francisco for at least two weeks. With Kittle sidelined, one would think that production has to go somewhere so Dwelley is certainly worth around 1% of your FAAB for those weeks.

Tre’Quan Smith is yet another guy coming off of an injury who could see production when he comes back. The Saints have struggled with injuries at the wide receiver position missing both Michael Thomas and Tre’Quan Smith, yet that luck should turn soon. Smith expects to return this week and that’s good news for anyone in need of a wide receiver. Last season we saw Smith be relatively productive going for over 400 yards and 4 touchdowns in 10 games. While that’s not anything to get too excited about it certainly would qualify him as a spot starter. Spend about 1% of your Week 7 FAAB budget on him.

Tre’Quan Smith says he’ll be back in two weeks. Video by @RealSuperNola pic.twitter.com/aBEzsjWxrB

Demetric Felton and D’Ernest Johnson both find themselves in a spot starter position this upcoming week for the Browns. With Kareem Hunt and Nick Chubb both likely out this Thursday we will likely see Felton and Johnson split time. While it is unclear who will get the brute of the carries I would expect Felton to be the main receiving back as he also lines up at WR. While Felton has has a pretty quiet career on the ground it is worth noting that in 2020 Johnson took 13 carries for 95 yards in week 4. With Kareem Hunt likely heading to the IR, Johnson and Felton’s value will mainly hinge upon Nick Chubb. Chubb has managed to stay off the IR and will likely return for week 8 if he misses this week. While Johnson and Felton certainly are valuable I can’t justify spending a huge percent of your FAAB for one week. If Chubb is out only one more week, spend around 2-3% but if it’s more you could go up to roughly 7%.

From @GMFB: #Browns QB Baker Mayfield is planning to play through his still-ailing left shoulder (labral tear), while Cleveland may be without its two top RBs — Nick Chubb and Kareem Hunt — for Thursday night. pic.twitter.com/fQivshFSqo

Marlon Mack has been pretty quiet all season, as expected playing behind Johnathan Taylor and Nyheim Hines. However, Mack has requested a trade from the Colts and the deadline is looming. We’ve seen Mack be productive in the past and if he lands on the right team we could see it again. If you’ve got the roster spot for him, he’s worth a stash.

Jamal Agnew has seen 11 targets over the last two games for the Jacksonville Jaguars. While he has failed to find the endzone, one would think that is coming soon. I understand that the Jags have a pretty deep WR room but why not take a shot and see if he blows up.

Rookie 3rd round draft pick Nico Collins is starting to show flashes of NFL potential. After missing 4 games due to injury Collins returned to the lineup and caught 4 of his 6 targets for 44 yards. Following a solid game, Collins received praise from both QB Davis Mills and Head Coach David Culley. In what is a pretty thin WR Group in Houston Collins has a chance to stand out as this season moves on. Nico could be a big-time Week 7 snag with your FAAB off the waiver wire.

Remember Jaret Patterson from college football? He ran for nearly 4,000 yards in three seasons and flew under the radar in the NFL Draft. He was signed by the Washington Football team as an undrafted free agent and now is set to be the 2nd running back on the depth chart if Antonio Gibson misses time. While Patterson has yet to show too much this season, if you have a roster spot open, this uber-talented rookie could be worth a shot.

While this is more of a spot starter, I think the Saints D/ST is worth a good look this weekend if you’re in need of a streamer. After watching Geno Smith out there this past Sunday night, this would even be a solid play if it was a straight fade on Geno Smith. Yet, it really isn’t, this Saints defense has been pretty stingy thus far. They’re only allowing 18.2 PPG (third-best in the NFL). A combination of this stingy Saints defense and poor Seahawks quarterback play makes them a solid play this week if you can get them for free.

Tua Tagovailoa, albeit it was against the Jags, had a pretty good game this weekend. He threw for 329 yards, 2 touchdowns, and a pick this Sunday, while additionally running for 22. With the Falcons coming up on the schedule Tua could be a streaming option for next week and beyond if his matchup lines up well. While I don’t think I would want Tua to be my every-week guy, for a free bid as a streaming option he’s certainly worth it.

Quez Watkins caught 3 of 5 passes this Thursday against the Buccaneers for 44 yards. While Watkins has not been putting out a ton of yards or points per game, he has been pretty consistent. Overall I would consider being a boom or bust candidate every week due to his deep-ball ability. Additionally, Jalen Reagor has not been particularly impressive so far and I would not be shocked to see Hurts start to favor Watkins. If you’re in a deep league, he could be worth a look.