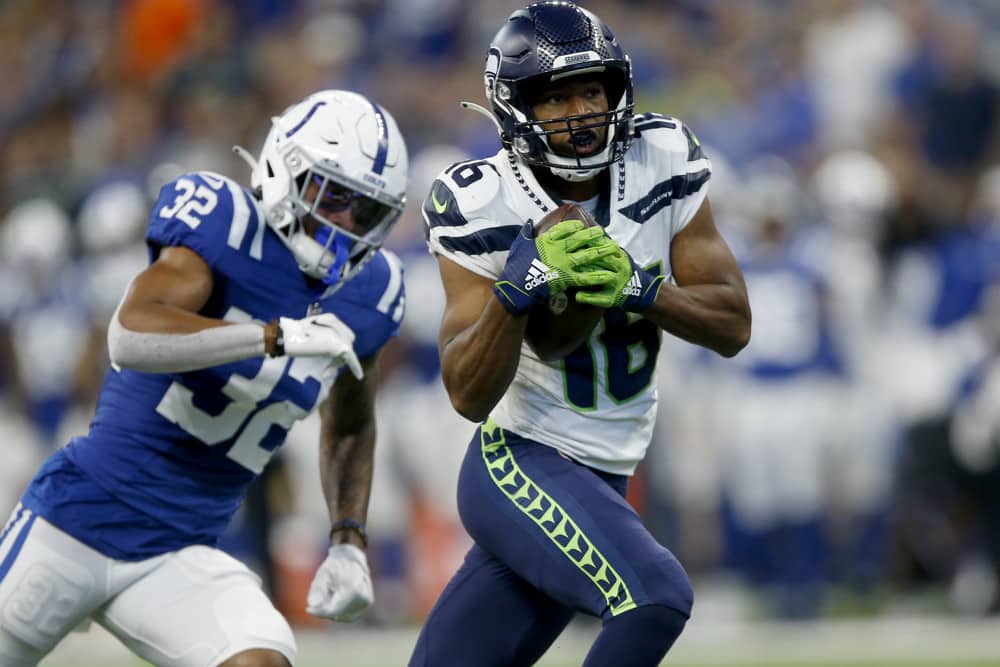 A bitter NFC West rivalry will be the backdrop for the Week 5 NFL Thursday Night Football showdown matchup. The Rams travel north to take on the Seahawks in what should be a fantasy friendly game. A quick look at the anticipated point total goes a long way to confirm this statement. At 54.5, this game’s over/under is the second highest of the week. On the one hand, you have two of the league’s more explosive offenses. On the other hand, you have two of the league’s worst defenses. If that doesn’t produce a fun slate, nothing will.

Of course, both quarterbacks are in play. That said, at $17k apiece, you’ll have to get creative in order to fit them into your roster. The same can be said for Cooper Kupp. The Rams leading receiver represents the most expensive player on the slate. Any combination of them, especially using one as a captain, will require looking lower down the listing to fill out your lineups. Below are a couple such options for you to consider along with a higher priced pivot.

It seemed as if Tyler Lockett was shot out of a cannon to start the season. He registered 12 catches for 278 yards and 3 touchdowns in his first two games. Since then though, the veteran wideout has cooled off considerably. Most of that chill has come by way of a hip injury he sustained in Week 3 against the Viking. Lockett battled through the pain last week against San Francisco, but had only 24 yards to show for it. On a positive note, he still managed to stay on the field for at least 86% of Seattle’s offensive snaps. That was one more than his 85% opening day snap count. That day, he caught 4 of his 5 targets for 100 yards and two touchdowns proving he needs very little opportunity to be productive.

The jury is still out on how much opportunity Lockett will have this Thursday against the Rams. One the plus side, he was not listed on the Seattle injury report this week. This is especially good news for the Seahawks considering D.K. Metcalf has been limited in practice. It’s highly likely though that Metcalf will still play through the pain as he did last week as well. In spite of that, both receivers can and have proved to be fantasy relevant in the same game. Metcalf did have the better game last week. That said, it’s been two games since Lockett has produced at a high level. Seems like he’s due for another high ceiling primetime performance.

Last week, Darrell Henderson Jr. played through a rib injury that kept him limited in practice again this week. In last week’s game, he carried the ball 14 times for 89 yards. He also caught 4 of his 5 targets for an additional 27 yards. All told, he left the field with 16.6 fantasy points. Not a bad day considering he was operating at less than full capacity. That changes this week. Henderson joined practice in full again on Wednesday. With that in mind, he looks to be a full go on the field this Thursday. Those looking to roster him should be encouraged by this Especially since he has produced double digit fantasy points in every game he has appeared in this season.

What helps this play along even more is Henderson’s matchup this week. He and the Rams are facing a Seattle defense that has given up the most rushing yards in the league so far this season. The Seahawks are surrendering an average of more than 150 yards on the ground to opposing running backs. Last week, the rookie Trey Sermon managed to gain 89 yards against the porous squad. Despite the obvious air show the Rams love to put on, they are not afraid to grind it out in the trenches as well. Expect this to be another week in which Henderson gets his and does enough to warrant his Week 5 NFL Thursday Night Football roster spot.

Under Jared Goff, both Cooper Kupp and Robert Woods were household fantasy names every week. Since Matthew Stafford came to town, Woods has begun to fade from weekly relevance. The Rams passing attack has taken a giant swing toward Kupp with everyone else taking a back seat. Although, Van Jefferson seems to be moving a little closer to the front than the rest of his counterparts. Over the last two week, Jefferson has seen as many targets as Woods. In both of those games, he has outproduced his fellow wideout in total fantasy points. Even last week when both found the end zone, Jefferson had more catches and more yards than did Woods. No one is suggesting yet that the younger model has overtaken the classic. For now though, momentum favors youth and it only seems to be building.

Lucky for Jefferson, he gets to face a team that is towards the bottom in terms of defensive passing yardage. Seattle comes into Thursday night allowing an average of just over 292 yards per game in the passing game. They are also allowing an average of two passing touchdowns a game. Considering Stafford is rolling into Seattle with a 305 yards per game average, one can assume there will be plenty of yards to go around. As if you needed anything more to add Jefferson to your lineups, here’s one more thing to consider. Coming into this week, Jefferson is averaging just over 17 yards per reception. The Seahawks are giving up an average of just over 11 yards per completion. The numbers are right for Jefferson to have another explosive outing. Given his price, he should be heavily considered as a captain in several of your rosters.

Many people were puzzled as to the circumstances by which Alex Collins entered last week’s game against San Francisco. With no real clear injury to Chris Carson, it seemed off that all of a sudden Collins began to get more work. That confusion went away with the announcement of Carson’s neck injury. It seems that injury has carried into this week with the Seattle lead back listed as a non-participant so far in practice. Assuming now that Carson will not play on Thursday night, the Seahawks will cue up Collins once again in his place. Last week in his relief role, the backup carried the ball 10 times for 44 yards and a touchdown against the 49ers. He also caught both of his targets for 34 more yards.

Rostering Collins this week will be wildly popular if only for his price alone. Even still, the amount of flexibility he gives you is almost too good to pass up. Not to mention, with it looking more and more like Carson will not play, Collins will get the bulk of the work from the start. The Rams are in the bottom third of the league in terms of rushing yards allowed which works out well for this play. If you pencil Collins in for at least 13 or 14 carries, it should be plenty for him to reach value, even in the captain’s slot. Should he find his way into the endzone again this week, it will be even better for this Week 5 NFL Thursday Night Football play.