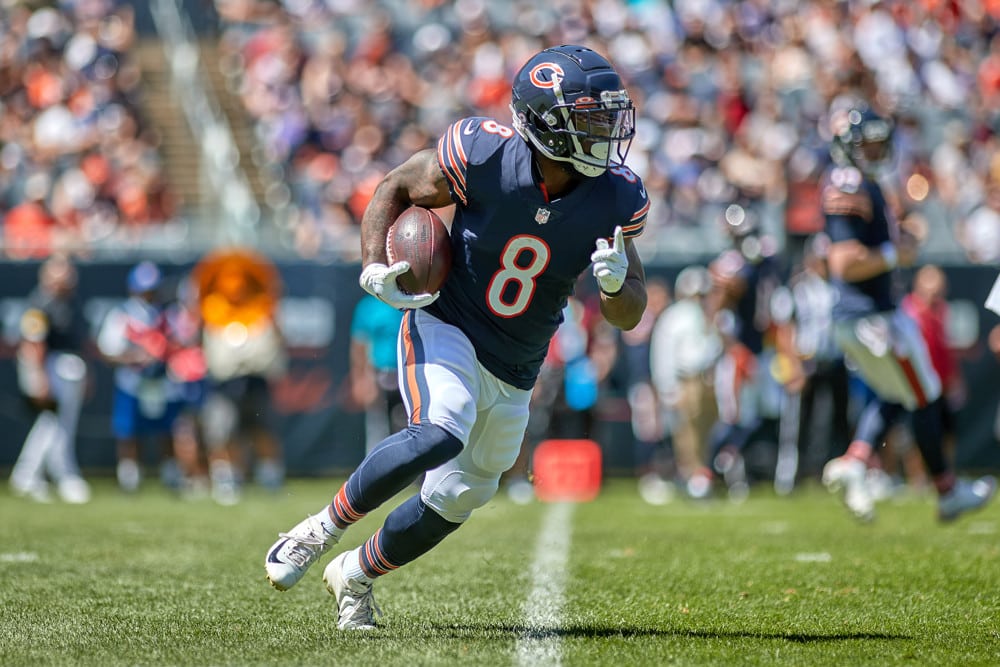 With Week 4 in the books, we are starting to get an idea of how our fantasy rankings may shake out at the end of the year. Whether you’re undefeated, haven’t won a game yet, or somewhere in between you’ve come to the right place. From backups to fillers for injured players and busts, I’ll be breaking down this week’s waiver wire and who to target with your FAAB in Week 5.

Week 4once again saw a big fantasy name go down, David Montgomery. While Montgomery was able to walk off the field, knee injuries are always a cause for concern. Currently, we have little information on Montgomery’s status but if he does miss significant time, Damien Williams is worth a pickup. This week, we saw Williams get 8 carries for 55 yards, and a touchdown on the ground. He additionally caught 2 passes for 15 yards. Williams showed that he can still be productive and is worthy of an RB2 spot if Montgomery misses significant time. Keep an eye out for an official ruling on Montgomery’s status to give you a real ballpark on a bid. Depending on time out you could go anywhere from 20-40%, so pay attention.

Bears don’t believe RB David Montgomery tore his ACL, but they are doing further testing today to determine the extent of the injury, per source.

While we’re on the topic of running backs, look no further than Alex Collins of the Seattle Seahawks. While Chris Carson has been relatively productive so far this year (RB16), Collins outperformed him this week. On 12 touches he totaled 78 yards and a touchdown. I’m not saying that Collins will be taking over for Carson any time soon, but if he continues to almost split touches with Carson he’s worth an add. We’ll continue to monitor this situation in Seattle but for now, look at spending around 10-15% of your FAAB budget on him.

Heading into this season, many had written off Emmanuel Sanders and guessed that this was likely it for him. Yet, four weeks into this season he sits at WR28. This week was once again an impressive performance catching 5 of 6 targets for 74 yards. While the Bills certainly have other options in the receiving game, it seems that he and Allen have built a great rapport making him a viable flex option. I would be willing to put around 10% of your FAAB budget on him if you’re in need of a receiver or flex.

Curtis Samuel is a guy who may have gone undrafted in your league due to injury. After a lackluster debut this Sunday taking 4 catches for 19 yards, he may still be flying under the radar. If this is the case in your league, get ready to spend around 20%  of your budget on him. While his rostered percentage is higher than all of the players on this list, I figured he was worth mentioning in case your league is still sleeping on him.

The LA Rams have one of the most high-powered offenses in the NFL giving them a multitude of fantasy options. That leads us to a second-year receiver, Van Jefferson. While many who drafted Robert Woods early may not want to hear it, the truth is Jefferson is outperforming him. Fresh off a 6 catch, 90-yard performance on Sunday in which he also caught a touchdown; I think he is on the verge of a major breakout. With his targets slowly increasing throughout the year I think we’re starting to see a real connection form. Spend around 7% of your FAAB on him as I would consider him a pretty safe add with a high ceiling.

In addition to the injury of David Montgomery, Week 4 also saw Jimmy Garoppolo go down. This paves a wave for rookie Trey Lance to see extended playing time. Like many others, I am high on Lance due to his rushing ability. With an extremely injured backfield, we’ve already seen Shanahan scheme up designed runs for Lance and this should only increase as he is now the starter. After putting up 41 yards on 7 carries, and throwing for 147 on 18 attempts including two touchdowns, Lance’s stock is only going up. I’d be willing to put up anywhere from 7-10% depending on where you stand currently at the QB spot. Additionally, if we see Lance perform well in Garoppolo’s absence, I would not be shocked if he slides into the QB1 role permanently and could be worth more FAAB beyond Week 5.

From NFL Now: Based on the words of #49ers QB Jimmy Garoppolo, it'll likely be a few weeks until we see him again. pic.twitter.com/1giDRuMMEx

The Arizona Cardinals are not typically known for having a productive TE but we’ve seen Maxx Williams have two weeks at TE1 level. This week he caught 5 out of his 5 targets for 66 yards and a touchdown. While so far into this short season, he’s been pretty inconsistent. Williams is likely going to spend most of this season as a low-end TE1 or streaming option.  If you’ve been streaming this year or if you need a guy in a pinch when byes start to roll around, spending 1% of your FAAB on Williams could be worth it.

Back to the topic of injuries, the Tennessee Titans missed both Julio Jones and A.J. Brown this week. Brown is once again expected to miss another week due to injury and with a lackluster matchup with the Jaguars on deck, Josh Reynolds is worth 1% of your budget. After 9 targets for 59 yards this week he showed you can plug him into a starting role next week if need be.

Could the #Titans be without their top two WRs this Sunday?

WR Julio Jones is getting treatment on a leg injury, and his status vs the #Jets is up in the air, sources tell me and @TomPelissero. AJ Brown also may miss a week or two with a hamstring injury.

In a similar scenario, we may see Samaje Perine get a start next week. Joe Mixon was diagnosed with a low-grade ankle sprain. While we have a very low sample size for Perine, a starting running back for an NFL team is almost always worth a start in Fantasy. You could spend about 1% to 2% of your FAAB budget if you’re a Mixon manager who needs a replacement for Week 5 if he can’t go.

Bengals’ RB Joe Mixon was diagnosed with a low-grade ankle sprain that will leave him week to week, per source.

Our last waiver wire target of the week is rookie HB Khalil Herbert of the week. This is mainly under the consideration that Damien Williams’ thigh bruise somehow keeps him out of Week 5 option. We know very little about Herbert, as he’s only had 3 carries this season, but if Williams is out Herbert will be the guy.

In terms of a guy with more week-to-week upside, WR Quez Watkins of the Eagles is starting to gain some traction in their offense. This weekend he received 7 targets, while he only caught 3 the fact that Hurts trusts him is promising. With one game already over 100 yards, Watkins has shown big playability. I certainly wouldn’t recommend starting him this coming week, he could be worth a stash if he breaks out.

While I only had one TE on this list thus far, Dan Arnold is a guy whose name you’ll start to hear more this year. While he was only targeted 2 times this week against the Bengals, he did catch both. Additionally, as a former WR, Arnold should be able to potentially usurp some of the roles which the recently injured D.J. Chark has vacated. The situation here with Arnold should be the same as Watkins where should likely stay on your bench until we see a little more production.

Remember the 40-yard dash record holder John Ross? Well, he might just be back. Ross caught 3 of his 4 targets for 77 yards and a touchdown this Sunday. While it was only 3 catches, there is still reason for more promise, this was his first game with QB Daniel Jones, and Darius Slayton and Sterling Shepard are both questionable for Week 5.

Our final no-bid target is WR Cedrick Wilson of the Cowboys. The Cowboys’ offense has shown itself to be for real thus far. That means the third WR on their depth chart prove useful at some point. While he has yet to receive over 5 targets in a game thus far, he has scored in the Cowboys’ last 2. He’s touchdown-dependent right now. However, if Prescott trusts him enough to look for him in the endzone, the yards may follow. If you’re in a deep league or you just want a lottery ticket, Wilson could be your guy.