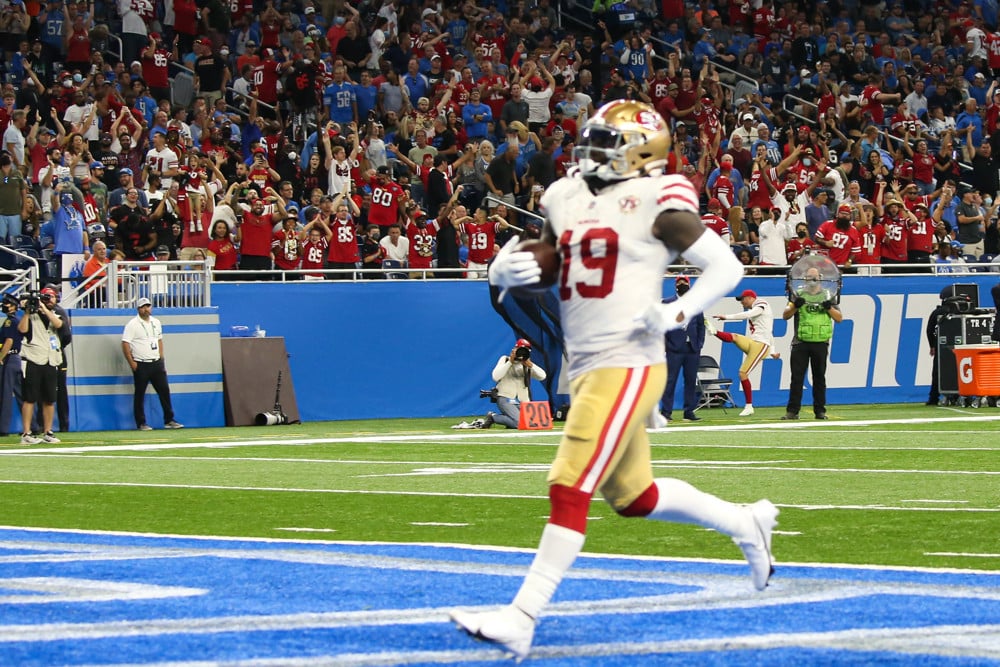 Well, I took one on the chin on my Thursday Night Player props. Nonetheless, I still have a winning record early on in the season. Sunday Night Football features a heavy-weight fight between the Green Bay Packers and the San Francisco 49ers. I hope I can get back on the winning track. Let me dive right into Sunday night’s NFL Player Prop Odds and Picks.

Deebo Samuel leads the 49ers in targets and total receptions. In fact, he is the only receiver on the 49ers that has double digit receptions and targets. Furthermore, in the first two games of the season, Samuel has exceeded six or more receptions in each of the games. I believe the Packers will have a difficult time slowing down Samuel in this game. We also have to give credit to Kyle Shanahan for finding different ways to get Samuel involved in the passing game. I love this Sunday Night Player Props Odds to go over!

So far this season, Davante Adams has not caught a touchdown for the Green Bay Packers. However, in three career games against the 49ers, Adams has four total touchdowns and scored in every single game. We know Adams is Aaron Rodgers’ favorite target and I believe that he will score his first touchdown against the 49ers on Sunday Night.

Thus far this season the Green Bay Packers defense has allowed seven passing touchdowns to opposing quarterbacks. In fact, they allowed at least two passing touchdowns to the two quarterbacks the defense has faced in the first two weeks. Even though Jimmy Garoppolo only has one passing touchdown in each of the first two games, I believe the passing game of the 49ers can take advantage of the below-average Packers secondary. Furthermore, the 49ers running back group has been decimated by injuries and it will be on the shoulder of Jimmy G!