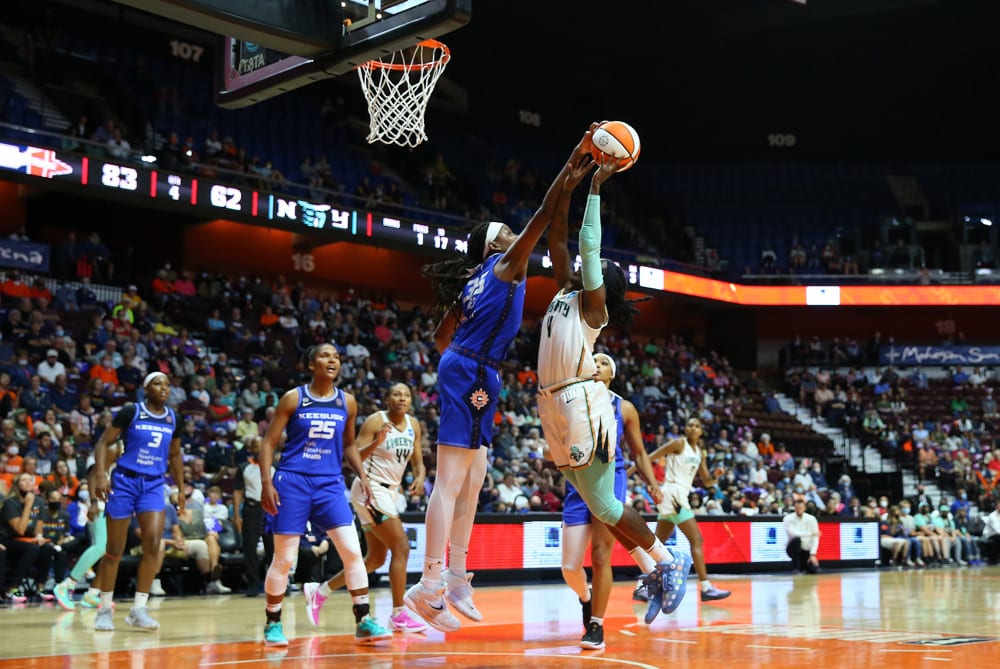 It’s the Connecticut Sun’s WNBA and we’re all just trying to find ways to bet in it throughout the WNBA Playoffs.

The Sun are the new favorites for the championship after stringing together 14 consecutive wins to finish the season. Their last regular-season loss was on July 3, though they did get thrown around in the Commissioner’s Cup loss to the Seattle Storm last month.

The WNBA playoffs begin Thursday with a single-elimination round between the 5-8 and 6-7 teams. The No. 3 and 4 seeds have a bye and play in the second round on Sunday. The semifinals and finals are both best-of-five.

Here are the outright betting lines and odds for WNBA Championship and Playoffs, via Points Bet, and what else to look for on the lines.

The Sun have the No. 2 ranked offense and No. 1 ranked defense in the league. Their defense is so good it’s nearly five points better than the second-ranked team in the Las Vegas Aces. The Sun have the cleanest path to the title, an impressive win streak, and the return of their “Engine,” Alyssa Thomas. Thomas has played with two torn labrums for years. They also have the sting of coming so close in 2019, when they took the Washington Mystics to a Game 5’s final minutes. The Sun are top dogs in the WNBA Playoffs and still have positive championhip odds.

The Aces were favored for part of the season, but it’s hard to go against that team in Connecticut. That all considered, the Aces have just as much firepower as the Sun. They are first on offense and second in defense. Seven players average double-digit scoring, a record for the WNBA’s history, and any of those can step up when needed. This offense is so prolific that the Sixth Woman of the Year race came down, for most, to two Aces players in Dearica Hamby (two-time winner) and Kelsey Plum (coming off an Achilles injury). It’s not a bad pick to go with the Aces for a WNBA title.

The books aren’t high on the Lynx, but we are. Sylvia Fowles is one of two players (joining likely MVP Jones) to average a double-double. Napheesa Collier, who can bully down low or pull back for a 3, is right there with her in player stats, and point guard Layshia Clarendon has led this team well after her free agency signing. Head coach Cheryl Reeve knows how to adjust within a game and season to get her team’s best. The Lynx have the benefit of a single-elimination game against the lower seed in either Chicago or Dallas. Despite being the #3 seed, the Lynx have positive odds to win the WNBA Championship.

Braided Phee is back.

Bring on the Playoffs. pic.twitter.com/Jw0eCoEBCN

It’s tough to bet against the Storm making a run to the championship, but do it. Though they have the third-best odds, they’ve been middle of the pack in the backstretch of the season when they need to be heating up. The Storm will have to win a single-elimination game — likely against the Phoenix Mercury — and beat the Sun, though they have done it three times this year. The biggest problem for the Storm is health with former MVP Breanna Stewart rehabbing an ankle injury.

That one was for you, Seattle! ⛈️⛈️⛈️

The Mercury could experience a first-round upset and we don’t see the Big 3 making it much farther than a second-round berth at best. But if the line is good enough, Phoenix can do away with the Liberty at home in a must-win game and knows how to take down Seattle. Diana Taurasi is expected to return for the Mercury on Thursday, and Breanna Stewart might have to miss the Storm’s second-round game. If that’s the case, consider the Mercury for a semifinal berth.

The Sky have been up and down all season despite such high expectations. Early on was excusable, but lately has been an issue of energy and consistency. They are ripe for an upset in the first round against the Dallas Wings and anything more than the second round berth seems lucky. Keep an eye on the spread and bet at the under 10 points. The Sky are WNBA Championship long shots when it comes to odds, but they are a fun squad.

Consider taking the Wings for an upset of the Sky, though we don’t recommend the title pick. The Wings are 2-1 against the Sky and their offense, ranked a quiet fifth in the league, looked smooth in the finale. All three of these games were close, and in a close elimination contest, it’s tough to bet against Arike Ogunbowale. As for the title, this group is still very young and finding a way to jell together. Getting by Chicago means a likely date with the Lynx and that doesn’t bode well for a deep run in the WNBA playoffs for the Wings.

The Liberty slid into the playoffs on the final day and should keep it close with the Mercury in the first round. They won in Phoenix with the X-Factor fans before, and their must-win finale showed they can grind it out when they have to. But so many times they haven’t, and if their 3-point shot is cold it results in a long day with nowhere else to go. Consider, if available, betting on a Sabrina Ionescu triple-double. This matchup feels ripe for one for the “super rookie.” They have the worst odds of any team in the WNBA Playoffs, but place some longshot bets and have some fun.