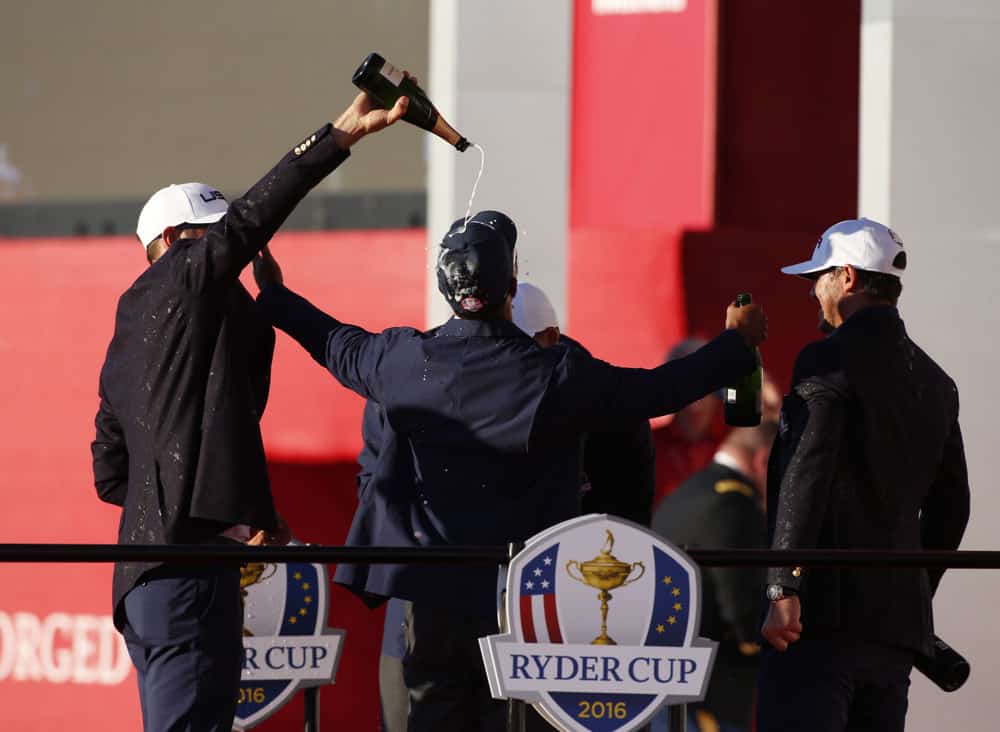 The Sports Gambling Podcast has spent much of Ryder Cup week breaking down the nitty-gritty of the teams and the golf course. But it takes a lot more than just talent and statistics to win a Ryder Cup. What are the paths to victories for both teams? Here’s how each team takes home the Ryder Cup.

#1: United States is Just Too Talented

We said this at the 2018 Ryder Cup, and the Americans flopped in spectacular fashion anyways. But on paper, the United States outclasses the Europeans in almost every metric. Wins. Major success. Statistical. Almost every quantifiable metric favors the United States. Even the most die-hard European Ryder Cup fan would admit his team is outgunned. This year’s United States Ryder Cup Team is chock full of super-talented players in the prime of their careers. If they play to their capabilities, there’s no excuse not to take back the Ryder Cup.

#2: The Golf Course Sets Up Perfectly For the Americans

While Whistling Straits makes its attempt to replicate an Irish Links course, there are not many links about it. Irish and UK links golf is usually firm and fast where players can use the ground game to get the ball onto the green. Whistling Straits plays a lot slower than a true links course. And most of the approach shots require more of an aerial approach to reach pin positions.

Not only is Whistling Straits as American as can be, but it also favors much of the Americans’ strength. Performance off the tee is very vital this week. Several tee shots favor a long left to right shot shape. There are so many Americans who prefer to hit fades off the tee. Dustin Johnson, Brooks Koepka, Tony Finau, Xander Schauffele, Collin Morikawa, and Daniel Berger all excel by hitting long left to right tee shots. And most of the approach shots into greens are either short irons or long approaches. That’s right in the American’s wheelhouse. This combined with a friendly setup, Whistling Straits is a true home-field advantage for the Americans.

#3: The United States Gets Off to a Fast Start

The Americans are a group of front runners. When things are clicking on all cylinders, it’ll stay that way. It’s been when stuff starts to go wrong for them at the Ryder Cup is when things begin to snowball. With a raucous home crowd cheering them on, getting out to an early lead in Friday AM foursomes would be huge. The Europeans have gotten the best of the Americans in foursomes over the last decade. But fourball is typically where the Americans’ individual talent stands out. If they can beat the Europeans at their own game Friday morning, they could really run up the score in the format they’ve shined in.

The Europeans are thin on firepower. If they want to upset the United States, not only do Rahm and McIlroy need to play all 5 sessions but secure a ton of points out of it. If one of them falters, it’s hard-pressed to find another player on their team capable of carrying them. There’s a combination of players past their prime, unproven players, or players not in the current form at the back end of the European team. If Rahm or McIlroy don’t bring their A-game, the Euros are in big trouble.

Ryder Cup Preview – How The United States Blows It

#1: Bad Weather Turns It Into a Rock Fight

Ball striking is where the Americans have a big edge over the Europeans. But if the weather is blustery it’ll level the playing field for everyone tee-to-green. It’ll mean that players might start missing more than their fair share of greens. That will turn this into an up-and-down contest. The Europeans on the whole have much better scramblers than the Americans do. If that’s the case, they can grind out enough matches to pull the upset.

Where the Europeans lack talent, they make up with experience. The Americans have six rookies on the team. Europe has five players who have played in at least four previous Ryder Cups. Not only does Europe have the experience to know how to grind out points, but they also have a winning pedigree. Europe has won 9 of the last 12 Ryder Cups in a variety of ways. Blowouts. Close matches. Epic comebacks. Lee Westwood, Paul Casey, Ian Poulter, Rory McIlroy, and Sergio Garcia have seen it all. They know that Ryder Cups aren’t won just by talent alone. It takes toughness and Moxy to win it.

#3: Many Americans Continue Their Slumps

There are some concerning recent developments for the Americans. The last we saw Collin Morikawa he couldn’t find the center of the clubface. Brooks Koepka is facing health issues once again. Scottie Berger and Daniel Berger are in the midst of a putting slump. Jordan Spieth’s ball-striking has regressed again. Xander Schauffele hasn’t played well since winning Gold at the Olympics. There’s some concerning recent form on many members on the American side. If most of them can’t shake that off, their chances of recapturing the Ryder Cup is in jeopardy.

#4: Europe Is the Better Run Team

The Europeans have run circles around the Americans in terms of team management. That’s why they’ve won 9 of the last 12. The Europeans have a clear system that not only have they stuck to, but they also get the players to buy into. Meanwhile, too often the inmates run the asylum for the Americans. There’s been too big of personalities in the team room who constantly vie for power. And when stuff goes wrong for the U.S., the Captains have been too weak to keep things on the rails. The off-the-course drama at the Ryder Cup always seems to be on the American side. The Europeans conduct themselves like an efficient locomotive. If there’s a bunch of nonsense around the United States again this year, the Europeans will return home with the Ryder Cup.

Ryder Cup Preview – Who Has The Edge?