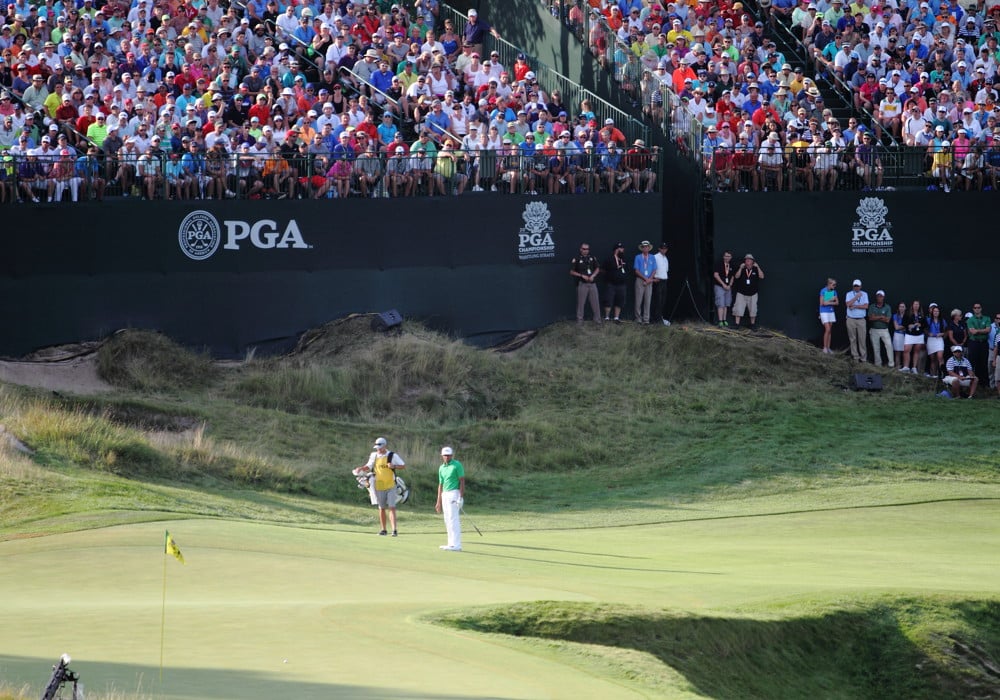 This is a pretty straightforward opening hole at the Ryder Cup. It’s about 240 to carry the sand dune down the right side of the fairway to about a 30-35 yard wide fairway. If the wind is at their back someone could try and take driver and funnel the ball down the slope to the front edge of the green. I only expect to see that in the four-ball format though. The first player can put one safely in the fairway leaving about a 100-125 yard approach. The second player could attempt to get it to the green with a driver. Either way, this one is a toss-up because it’ll come down to who can stuff a wedge close for an opening birdie.

The wind the first two days are calling for winds out of the West and West-Northwest. That’ll create some tricky crosswinds. It’ll be vital to keep the ball on the fairway to come away with a birdie. Not only does the U.S. team have way more players who eat up Par 5’s, but they also have a lot of players who prefer to hit controlled fades off the tee. That’ll help hold the ball up in the wind to keep it play for their second. They also are much better overall on longer approach shots than Europe is. The Americans should have the edge on this Par 5 hole at the Ryder Cup.

Winds out of the west will make this a tough hole at the Ryder Cup. Players will be hitting mid irons into the cross wind to a green below the tee box. That’ll want to push balls towards the lake. Missing left on this hole is death. The Europeans collectively hit their mid-irons better than the Americans. They’re also used to flighting the ball lower to keep it out of the air as long. I expect the Europeans to out-point the Americans on this hole all week.

The fairway slopes towards the lake on Hole No. 4. Any ball with a right to left shot shape will not only get carried left with the west wind, but it also won’t stop running towards the lake once it hits the ground. On the whole, the Americans have stronger drivers who hit lots of controlled fades. I think this hole might give the Europeans a lot of trouble off the tee this week. It calls for a long and accurate drive.  The Americans should have the edge on this hole at the Ryder Cup.

This hole is going to be a beast. Ideally, the Americans would love to cut off a lot of this hole with a big drive over the sand dunes. That won’t be possible from the back tees with winds from the west all weekend. Maybe Stricker will move up the tee box to allow the Americans to do so. If not, Both the Europeans and Americans will have to take the long way around the hole. Everyone will probably look to bail outright. Trying to carry it over the water from 250-270 into a crosswind is a tall ask. That’ll turn into a contest of who can get up and down for birdie. The Europeans on the whole are a little better scramblers, but the Americans are stronger putters. Call this one a push.

Another short Par 4, but this one encourages driver off the tee. Laying back off the tee means a forced carry over numerous bunkers well below the putting surface. Given the crosswinds expected, the play is to blast it as far down the hole as possible for less than 50-yard approach into the green. Holes like this are the bread and butter of the American team. They’ll have the edge here.

Another shot where the westerly winds will want to steer the ball towards the lake. But this one isn’t as challenging as Hole No. 2. Players can start their long irons well left of the green and let the wind carry the ball left to right towards the hole. On the whole, the Americans have better long approach players and more players comfortable hitting fades. They’ll have an edge on this hole as well.

Another hole that requires a really good drive. But the fairway bottlenecks around the 300-yard mark. Holding back a bit while ensuring the ball stays in the wide part of the fairway might be the play. That’ll set up a mid-iron into the green. Unlike other holes on the course, players have the opportunity to bounce the ball up to the hole from the front of the green. That plays more into the hands of the Europeans, who can flight their mid-iron down to stay out of the crosswind. They’ll have a good chance to beat the Americans on this hole all week.

This hole will play into the wind for most of the week. That’ll make the hole longer than what it says on the scorecard. The fairway bottlenecks about 310 yards from the tee, but the headwind should keep the ball well short of that to a generously wide landing zone. From there, players will have about a 150-170 yard shot into a small green. Neither team probably has much of an advantage over the other on this hole.

A visually intimidating hole, but one with way more room off the tee than it appears. This hole encourages players to hit drivers as far up as they can to set up a 40-75 yard approach to the green. Like Hole No. 1, this will be a birdie hole. It’s a contest of whoever can stick their short approach close and convert the putt to walk away with at least a halved hole.

This hole was a Par 5 at the 2015 PGA Championship. For the Ryder Cup, however, they’ll utilize forward tees on this hole to make it a long Par 4. I think that’s a mistake for the Americans. They have a massive advantage in Par 5 scoring on their teams as a whole. Now the hole takes most of the sand dunes out of play to a fairly safe landing zone for everyone. That sets up a flighted mid-iron where the ground can be used to run the ball up to the green. On the whole, the Europeans have a little better at that game than the Americans are. They’ll capitalize on the American’s mistake of turning this into a Par 4.

This one sets up for a short iron into a very interesting green. While the narrow back part of the green would be really cool to see played, I don’t think the Americans will ever put a pin all the way back there for match play. Expect most of the pins to be in the fat part of the green to make this a relatively boring hole. It’ll be a game of who can stick their short irons close. Both teams are capable of doing just that from off a tee.

After a stretch of holes where the Americans are behind the eight ball, they walk up to the 13th with a favorable hole. This hole requires a long left to right drive off the tee to set up a high-flighted wedge into the green. That plays right into the hands of the Americans and is a style they’re comfortable with. They’ll have the edge on this hole.

Another short Par 4, but this one will probably be less-than-driver off the tee. That’ll set up another high flighted wedge into the green. This one will play similar to Hole No. 1 where it’ll be a contest of who can stuff their short iron close for a birdie. There’s no discernable edge on this hole here.

Players might get a little assist with a tailwind, but it’ll still want to force balls towards Lake Michigan. This hole requires a booming left-to-right drive down the fairway to make this hole play a lot shorter. Players will have to hit higher shots into the green to play more of an aerial game. This hole once again sets up really well for the powerful Americans.

This is a very straightforward Par 5. Things might get a little complicated it plays with a crosswind. But the Americans are loaded with players who eat up Par 5’s. The Americans should have the edge on a key closing hole.

This hole is going to be a beast if the players face a south wind. There’s absolutely no room to miss left, so look for players to just pray and hope they hit the middle of the green. On the hole, the Americans are better long iron players than the Europeans do. This is another hole on the closing stretch that the Americans have the advantage on.

Winds will be in the player’s face on the closing hole. That makes this hole essentially play like a shorter Par 5. It’s going to be a tough hole for everyone. There’s an opportunity to cut off a lot of the hole with a drive down the left side over the bunkers. But with headwinds that’ll make that task very difficult. This one will be a mid to long iron into a large green. It’s hard to see anyone making birdie or come away with a bogey. Par will probably win or at least half the hole. Most likely both teams will be able to two-putt for par.

The Europeans certainly have their work cut out for them. There aren’t many holes where they can take advantage of their superiority in their mid irons and scrambling. There are several holes that favor great left-to-right drives off the tee. Additionally, there are several holes where players will have either a wedge or a longer club into the green. That tends to favor a more American style of golf. And that’s before the United States gets done setting it up to exactly how they want it. From a golf course perspective, the holes at Whistling Straits definitely favor the United States at the Ryder Cup.

Ryder Cup Preview – Who Has The Edge?