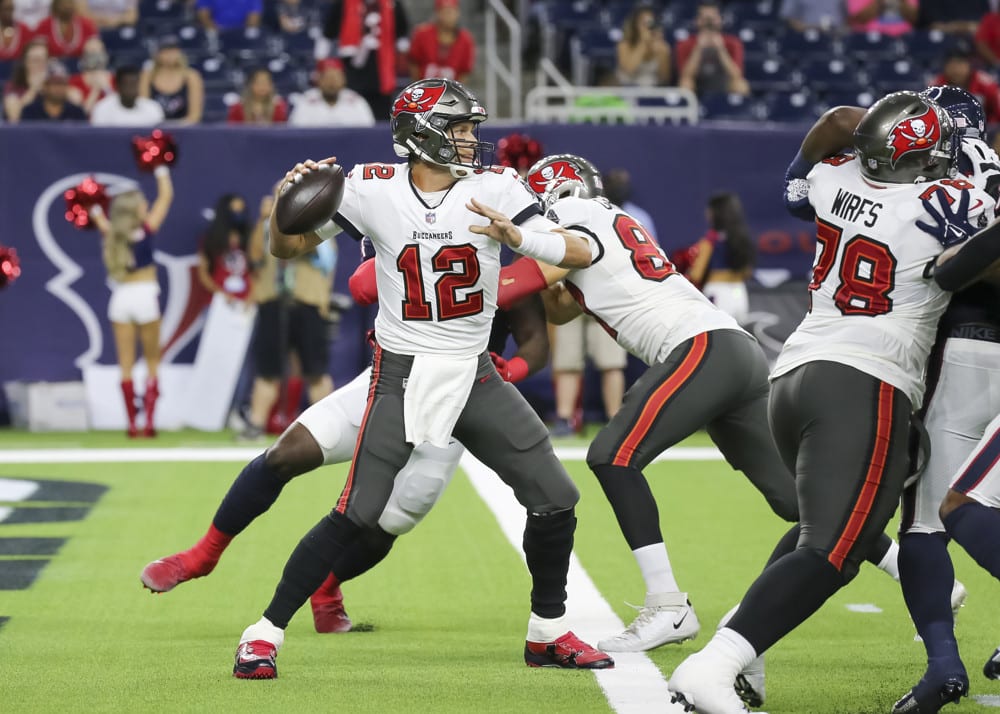 What more is there to say than Tom Brady and a Super Bowl victory? The Tampa Bay Buccaneers won the 2020-2021 Super Bowl in Brady’s first year in Tampa Bay. It was Brady’s sixth ring.

Tom Brady dealt played with a torn MCL in the second half of the season and yet found a way to win it all? Can we put the greatest of all-time debate to bed? Furthermore, there were other key players that dealt with injuries in the tail end of the year. Now, the Buccaneers are healthy and ready to defend their championship.

There isn’t much that is new for the Tampa Bay Buccaneers this season. They return most of their key starters on both sides of the football from last season’s championship team. Both Rob Gronkowski and Antonio Brown are back with the team. The weapons around Brady are plentiful. The one thing that may be new for the upcoming season is health. As I mentioned above, Brady dealt with a torn MCL, which is healed. Furthermore, Antonio Brown had surgery in the off-season on his knee. Reports out of Buccaneers camp is Brown looks like the receiver he was four to five years ago.

The Buccaneers have one of the five easiest schedules for the upcoming season. They face the NFC East and the AFC East this season along with games against the Colts, Bears, and Rams. In addition, the Buccaneers face a below-average schedule of pass defenses. Let’s also not forget the biggest game of the season will be Tom Brady returning to Gillette Stadium to take on his former week in Week four.

It’s not a surprise that the Buccaneers are the second favorites to win the Super Bowl this year. When you have Tom Brady as your quarterback you always have a chance. Frankly, I am surprised to see the Buccaneers to only be a -200 favorite to win the NFC South. As I mentioned above, the Buccaneers have one of the easiest schedules this coming season. The roster continuity and chemistry are going to bode well for the Buccaneers this season.

There was serious doubt if we would see Antonio Brown play another down in the NFL prior to signing with the Buccaneers. I am glad to see all the off-the-field issues are behind him. Antonio Brown had surgery in the offseason and there are reports that he looks like the All-Pro wide receiver he was when he was with the Steelers. Furthermore, Brown came on towards the tail end of the season. He scored a touchdown in five out of the last six games including the playoffs. In eight games as a receiver for the Buccaneers, Brown racked up 483 receiving yards. Now, with a full offseason program and starting the season with the Buccaneers, he could have a huge season.

The Buccanneers have a lot of weapons in the passing game and there is also a logjam in the backfield. Not only do the Buccaneers return Leonard Fournette, but they also added Giovani Bernard to be a pass-catching back. Last season, Jones rushed for 978 yards which included a 98-yard rushing touchdown. I believe we will see more of a balanced attack from the ground game and may not see Ronald Jones as the featured back for the Buccaneers.

As I mentioned above, there are plenty of players in the backfield for the Buccaneers. Someone will have to take a back seat to the others. As SGPN’s fantasy writer Scott Simpson highlights in his article, Leonard Fournette might be that guy to takes the fall. For Fournette to be relevant in fantasy, he is going to have to produce in goal-line situations.

I am on the Tom Brady train this season. He has his eyes set on breaking the all-time passing yards record and he wants to do down as the greatest of all time without a doubt. The Buccaneers face a below-average opposing pass defense this season which provides plenty of opportunities for Brady to rack yards and passing touchdowns.