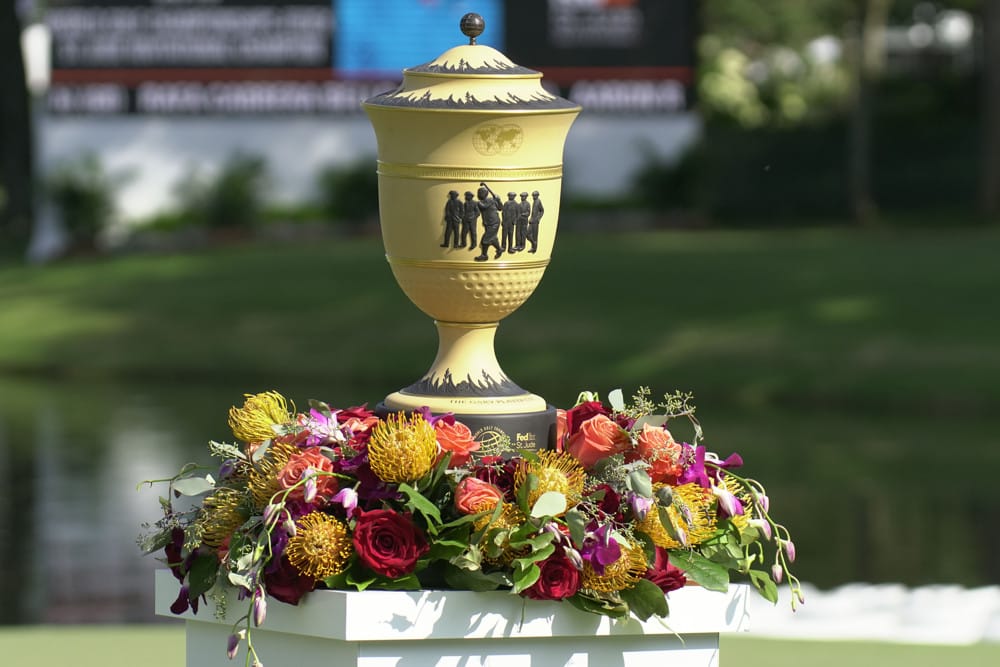 After a thrilling finish at the Olympics, the PGA Tour resumes its late summer run. A star-studded limited field heads to Memphis, TN for the WGC FedEx St. Jude Classic at TPC Southwind. As always, here is your early deep-dive on the WGC FedEx St Jude Classic and a preview for how to bet.

Several big names are returning from the Olympic competition to play the WGC FedEx St. Jude Classic. Highlighting the list is Xander Schauffele, who won gold in Tokyo. At long last, Schauffele picked up another win to his resume with stellar play in the Olympics. He’ll look to continue the momentum at TPC Southwind. Other notables returning from Tokyo in the field this week include Justin Thomas, Collin Morikawa, Rory McIlroy, Viktor Hovland, Hideki Matsuyama, and Patrick Reed.

Among the well-rested foes, they’ll face in Memphis is Dustin Johnson and Brooks Koepka. The duo has a combined three wins and five other Top 10’s at TPC Southwind in their careers. Along with Daniel Berger (with two wins at TPC Southwind), they’re the course history studs at this event.

For 20 years, this tournament was known as either the WGC – NEC Invitational or the WGC – Bridgestone Invitational and held at Firestone Country Club in Akron, Ohio. Firestone Country Club was a regular stop on the PGA Tour since 1962 when it hosted the World Series of Golf and was host to the 1975 PGA Championship won by Jack Nicklaus. In 1999, the World Golf Championship series of tournaments was born to create a “World Golf Tour”, and the World Series of Golf was rebranded into a WGC event at Firestone.

Meanwhile, the city of Memphis first hosted a PGA Tour stop in 1958, then known as the Memphis Open, and played at Colonial Country Club. In 1969, legendary entertainer Danny Thomas struck a deal with the city to attach his St. Jude’s Children’s Hospital as the charitable beneficiary of the tournament, and the hospital has been attached to the event ever since. The tournament also found a permanent home at TPC Southwind in 1988, the site of this week’s event.

FedEx first came on as title sponsor in 1986, and after a brief hiatus in the 2000’s it returned as the flagship sponsor in 2009. FedEx, obviously, has a very significant presence on the PGA Tour overall. It is the title sponsor of its playoffs and offers up millions and millions of dollars in prize money to the participants. Outside the players, FedEx probably has the most influence over the PGA Tour of anyone or any organization.

With the reconfiguration of the PGA Tour schedule in 2019, FedEx took over the sponsorship rights of the WGC-Invitational and moved the tournament from Firestone to TPC Southwind. The tournament was moved to the week after the Open Championship so it could properly shine in the spotlight. Due to the COVID pandemic, this tournament was rescheduled to one week before the PGA Championship.

This move was a huge benefit for the City of Memphis, the St. Jude Children’s Hospital, and FedEx overall. While a few big names who had associations with the children’s hospital always showed up, the event was one of the weaker tournaments on the schedule. Now with its affiliation to the WGC’s, the biggest names would certainly show up for the lucrative prize money, which would greatly benefit the hospital, the city, and FedEx economically.

I’ve spent the last two years railing on the farce that is both the WGC format and this event. The hate has nothing to do with the city of Memphis nor the Children’s Hospital (which everyone should donate to). If you’d like to rehash all my grievances, click here. Instead, let’s just focus on the golf course itself:

As a golf course, it’s fine. What you see at TPC Southwind isn’t much different than what’s seen at other TPC golf courses. While in immaculate condition, there’s nothing special about the land, the routing or the shape of holes. Most holes feature narrow, tree-lined fairways with either a water hazard or a bunker in the landing zone. The greens have some interesting contours and shaping to it to allow for some decent pin positions. Those are heavily guarded by multiple greenside bunkers or more water. In all, 11 of 18 holes feature some sort of water hazard, either off the tee or on the approach shot.

Both the greens and rough are bermudagrass. The fairways are zoysia. The greens average about 4,300 sq. feet in area, which is on the small side for PGA Tour stops. The greens typically run between 11.5 and 12 on the stimpmeter. That’s about average for a PGA Tour event.

The golf course is a shade under 7,300 yards and is a Par 70. The two Par 5’s are gettable from a yardage standpoint, however, accuracy on the hole is paramount to ensure a birdie. The 3rd features a large water hazard right of the green. The 16th is heavily tree-lined and requires a precise tee shot to go for the green in two.

The Par 4’s aren’t very long overall either. Only three will play over 475 yards long. None of them, however, are driveable. And many are defended with water hazards or bunkers.

Let’s first start with what types of attributes to target based on the golf course itself.

Proponents of TPC Southwind will claim that the golf course is challenging as evidence by having the most water balls in tournament play since 2003.  But just because a golf course has a lot of water doesn’t mean it’s difficult, particularly when the FedEx St. Jude Classic has seen as weak of fields as it has over the last 10 years. We saw this a few weeks back at the 3M Open. While big numbers were possible with loose ball striking, the golf course can be very gettable.

What will dictate how the scoring goes is how firm the golf course is. Memphis didn’t receive a lot of rain in July and there’s no rain in the forecast this week. A firm TPC Southwind won’t be quite as receptive as it can be. Expect a similar winning score of mid-teens under par like last year.

As far as what’s important to score well at TPC Southwind, here’s the relative importance skillsets chart of the golf course: 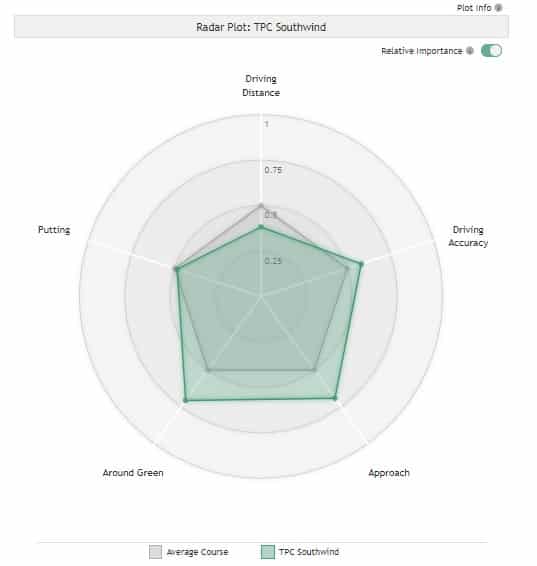 Driving accuracy is a dangerous stat to rely on. The pure driving accuracy % stat on PGA Tour Live is a “yes” or “no” proposition. It fails to capture any context such as if the ball landed in the intermediate rough, if the rough itself is actually penal or if a player gained a substantial advantage by sacrificing accuracy for distance. At TPC Southwind, however, hitting balls more often from the fairway is an advantage. Like last week at Kasumigaseki, hitting balls off zoysia fairways is like hitting balls off a tee. That makes it much easier to hit great approach shots into the small greens of TPC Southwind. Hitting from the fairway also will maximize the talent disparity between elite, average and poor iron players. That’s evidence by the premium in approach play above.

Hitting out of 2.5 inch Bermuda rough is not an easy task, even for stronger players. Balls sink to the bottom in Bermuda rough that deep and make it difficult to control the clubface for good contact. Given how firm the golf course might play this week, bomb and gouge might not be the best strategy.

The chart above also puts a premium on great scrambling. This might be a little misleading. A lot of this data is derived from past leaderboards at the FedEx St. Jude Classic. Those fields are much weaker than those of a WGC. Many players in that field are players who do not possess elite skills off the tee or with their irons. Rather, they stay on the PGA Tour with incredible short games. What also makes it misleading is that the green in regulation rate at TPC Southwind is about tour average. Events with low green in regulation rates are the ones where better scramblers can gain an edge on the field.

The last angle to consider is the WGC format. Typically, the cream rises to the top at WGC’s. Elite players rise to the top of leaderboards when guaranteed four rounds. That’s why, since 2014, it’s an elite list of winners at the no-cut WGC stroke-play events:

It’s fun to dream about a 75/1+ long shot cashing big for you. But at a WGC, don’t go nuts. Keep your pre-tournament bets reserved for an elite class of player with high win equity. There’s always an opportunity to live bet a sleeper should they show some form.