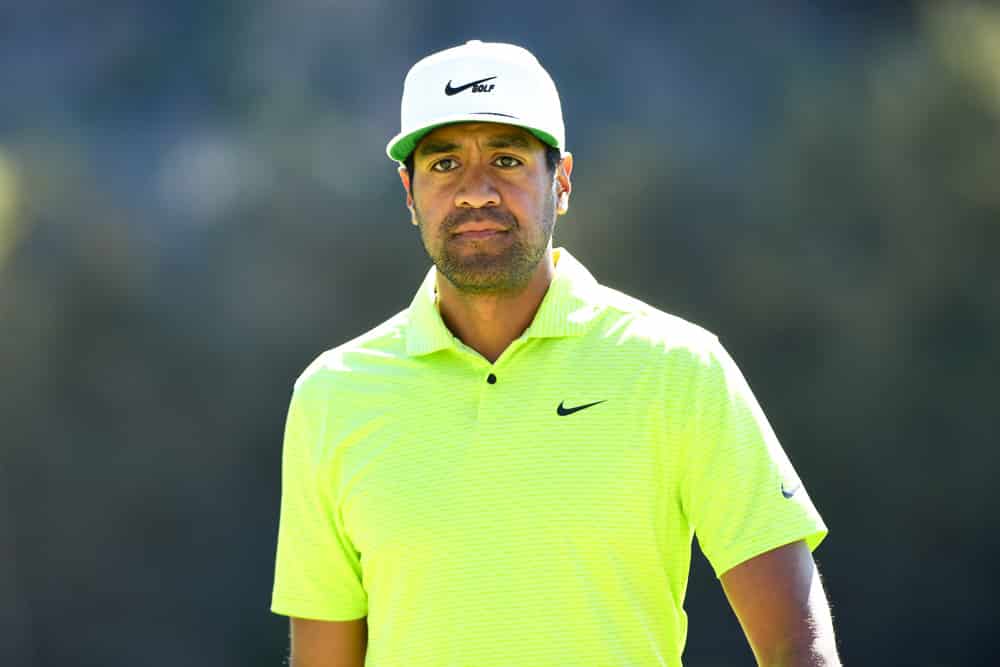 It’s been a crazy year in professional golf. 50-year-old Phil Mickelson just won the PGA Championship. Forever bridesmaid Hideki Matsuyama won the Masters. 48-year-old Stewart Cink won not once but twice on the PGA Tour this year. The 2020-2021 season has shown that nothing is impossible on the PGA Tour.

So why not continue the trend of weirdness with a long-overdue victory for Tony Finau. On paper, he checks a lot of boxes. Efficient tee-to-green. Great iron player. Good scrambler. Streaky hot putting. Solid history at Colonial. Solid history at the comparison courses that were laid out in the Charles Schwab Preview.

And yet, his name has not been floated around a lot this week as a serious threat to win. He’s not even all that popular in DFS this week. His name doesn’t even appear on the PGATour.com Power Rankings for the Colonial this week! The stigma that he can’t win is permeating through the golf gambling community. Somehow, typically popular Tony Finau has suddenly fallen out of favor despite continued excellent play. While everyone is looking the other way, this might be the week to pick Tony Finau to win the Charles Schwab Challenge.

Affectionately, we on the Golf Gambling Podcast have nicknamed Sungjae Im “knucklehead” for his perchance to blow up your bet slip when you least expect it. It’s happened many times over the last few months. Meltdowns at the American Express, the Farmers Insurance Open, and the Valspar Championship are his most notable frustrating moments.

But Sungjae Im is going under the radar this week. And despite our harassment, his results for the last few months are very solid. Since the beginning of the year, Sungjae has eight Top 25 finishes in 15 starts. He’s shown a lot of improvement in both his irons and his scrambling over his last few tournaments. He’s a very good putter. And he finished T10 at Colonial last year.

Sungjae hasn’t been able to put four full rounds together in a while. Maybe this is the week he does it.

Yes, Sergio Garcia has missed four cuts in a row. But it hasn’t been as bad as it’s seemed. Sergio has been screwing up his tournaments on Fridays. At the RBC Heritage and the AT&T Byron Nelson, Sergio got off to very nice starts in each tournament. But dreadful Fridays sent him plummeting down the leaderboard for an early flight home.

Ball-striking is not a concern for Sergio. It’s his putting, like always, that has been bad. But notable struggling putters have found magic with the flat stick for victories this year. Collin Morikawa lost 7.55 strokes putting at the Genesis before gaining 4 at the WGC-Concession to win. Justin Thomas has struggled with his putter all year long, yet did just enough to pair with fantastic ball-striking to win the Players Championship. Even a player like K.H. Lee who was striking the ball well but putting horribly found a bit of magic on the greens to win the AT&T Byron Nelson.

Funny things happen in golf for seemingly no reason at all. The one constant in all of this is Sergio Garcia is really good at Colonial and he’s a good ball striker. He’s worth holding your nose and betting his odds with the ceiling he possesses.

The latest forecast looks like it’ll be challenging ball-striking conditions. Wind on Thursday and Friday will make it a tough go of it tee-to-green. Rain on Saturday will also make the players uncomfortable standing over the ball.

Enter Russell Knox, one of the better ball-strikers 100/1 or worse this week. Russell Knox has high green in regulation rates and is a very good scrambler. He also doesn’t get in trouble off the tee and can properly navigate his way around Colonial. He owns a Top 10 at the golf course in the tough weather conditions seen in 2019. And he owns three other Top 25 finishes at the golf course. He’s a dreadful putter, but even that has seen some improvement of late. He’s a dark horse pick to win the Charles Schwab Challenge.

The world was on Doug Ghim at the AT&T Byron Nelson. His odds to win the tournament were close to 70/1 by the time Thursday rolled around. He had 20+% ownership in DFS. He was everyone’s pick for the week.

And then he laid a big, fat, stinky egg.

His problems aren’t with his ball-striking. Over his last 16 rounds, he is gaining 1.44 strokes per round tee-to-green. The problems lie solely with his putter. It was speculated at the AT&T Byron Nelson that he’s a much better putter on bentgrass surfaces. He proved those people wrong by losing over three strokes putting on the week.

But he’s had two weeks to re-evaluate his game. What if the bentgrass greens take wasn’t totally incorrect and the Byron Nelson was a fluke? What if he’s worked with his coach and figured things out on the green? Is it possible he shows up this week priced for a bounce-back on the greens?

It doesn’t seem like anyone else this week is willing to give him a pass for what happened at the AT&T Byron Nelson. But you should. He’s a very talented player who will win eventually on the PGA Tour. At 125/1, he’s worth a flyer pick for the Charles Schwab Challenge.

With full transparency, I bet the outright number when it was 35/1. It has since dropped to 25/1 on most books. The nosedive in the price is due to significant popularity from the golf gambling community.

But I like him for a Top 10 at relatively appealing odds of +270. He’s been solid at Colonial, highlighted with a T8 finish at this event in 2018. He’s a machine tee-to-green and hits a ton of greens in regulation. His putting has significantly improved. And while the strokes gained data on his scrambling is very poor, he still manages to have relatively good scrambling rates. His weaknesses around the green might be a tad overblown. Even so, he’s a talented enough ball-striker to finish inside the Top 10 at a golf course that should fit his strengths. He’s a solid pick for a Top 10 prop this week.

Brandt Snedeker is on a nice little run of late. Over his last four tournaments, he’s gained 0.85 strokes per round tee-to-green. He’s seen a surge in his performance with his irons, scrambling and putting. And he has a very solid track record both at Colonial and other comparative golf courses. That’s enough boxes checked to warrant a bet for a Top 20 prop.

Zach Johnson is getting a lot of respect in this matchup because he’s a former champion and consistently eats up Colonial. But there have been a few Zach Johnson favorited golf courses recently where he has faltered. He just isn’t playing well tee-to-green. He also has missed the cut at Colonial in two of his last four starts with a high finish of only T43. Meanwhile, Pat Perez has three consecutive Top 30 finishes and has improved his performance tee-to-green in the short term. He also has a solid track record at Colonial. If offered strokes at reasonable juice, take it. But if not, grabbing him straight up at +115 is a viable option too.

There’s a lot of people betting on Charley Hoffman this week. And for good reason. He checks almost all the boxes of a player to target at Colonial. But oftentimes when a player valued 30-50/1 is talked about like he’s the messiah, things can go poorly. Meanwhile, Brian Harman struck the ball really well tee-to-green at Kiawah, only to then uncharacteristically get mauled putting. There is bounce-back potential for him this week. Taking Brian Harman against Charley Hoffman is solely a bet made against public opinion.

Justin Rose had a great finish at Kiawah last week. Overall, however, he kind of faked his way around the golf course. For the week, Justin Rose lost almost 0.7 strokes per round tee-to-green. He made up for that, however, by gaining almost three strokes per round putting. Rose has had trouble with his ball-striking all year long and the putter should cool off. Like he did after the Masters, a letdown missed cut might be in his future.