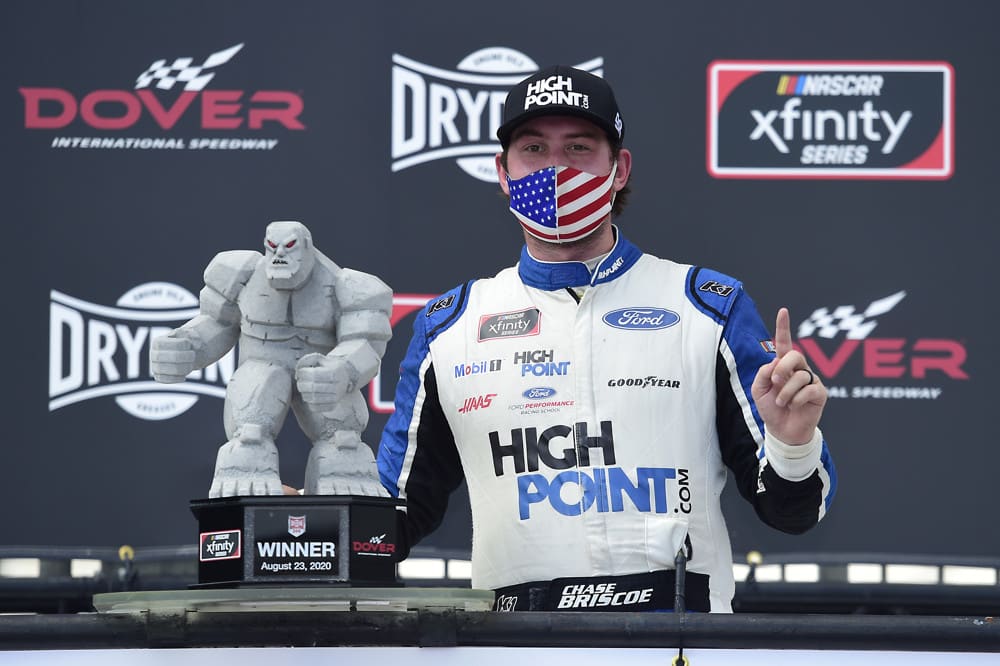 Coming off of a throwback weekend, NASCAR returns to the present and to the Dover International Speedway for the Drydene 400. This one mile track is referred to as, “The Monster Mile,” due to its high banking and limited racing area. Richard Petty was the first to conquer this monster back in 1969. His ’69 Ford led 150 laps on his way to the checkered flag. On Sunday, 37 drivers will try and do the same.

Joey Logano rolled (and rolled and rolled) at Dover in 2009. pic.twitter.com/uLCMUzJmOF

For the last seven seasons, Martin Truex Jr. has done little to nothing wrong on the Monster Mile. In the 14 races that have been run at Dover since 2014, he has only finished outside of the top-10 twice. Of those, six have been top-3 finishes including two checkered flags. The last of which he secured in the 2019 Spring race. That day, he drove his SiriusXM Toyota Camry from a 13th place start to cross the finish line in first. Along the way, he paced the field for 132 laps. Since that win, he’s ripped off a string of three straight second-place finishes at this track.

Not to mention, he finds himself second behind Kevin Harvick with 622 total laps led here. Be aware though, that he has yet to win a race in which he started on the pole. He’s had three such attempts prior to this week in his career.

Retweet to congratulate @MartinTruex_Jr on his dominating WIN at Darlington! pic.twitter.com/Ys56avEOXW

Last week, it was almost impossible for you to cash if you did not have him in your lineups. His monstrous 138 fantasy point performance was highlighted by his 248 laps led out of the 293 possible. He was masterful in staying out of trouble and quickly finding his way back to the front on those rare occasions when he lost the lead. His victory marked the third of the season. Not only is he the Cup Series leader in that respect, but he is still the only driver to win more than one race this season. Sunday, he’ll roll off from first. He’s a driver on a hot streak and it’s hard to bet against him at the Drydene 400, especially on a track he’s enjoyed an elevated level of comfort.

When you look for dominators, you are looking for drivers strong enough to not only finish in a strong position but to lead laps as well. Here at Dover, Kyle Larson checks both of those boxes. Over his 12 career starts at Dover, Larson has nine top-10 finishes. His best outing came in 2019, the last time he ran here, where he took home the checkered flag in the fall running. That victory is one of his six overall top-5 finishes in his career at Dover. He’s also no stranger to running in front here either. Despite his limited experience and missing the entire 2020 season of Dover races, Larson has managed to lead an impressive 617 total laps around the Monster Mile.

These include the 241 he accrued in the Spring of 2017. It was a dominant day for his #42 ride. With four laps to go, he opened up an almost three-second lead over Jimmie Johnson. On that lap, a single-car accident brought out a late caution forcing overtime. On the restart, Johnson jumped out to the front and was declared the winner after a massive wreck behind the leaders ended the race. Should that race have stayed green, Larson would have won.

At Darlington last Sunday, he mounted an unsuccessful late charge to try and take the lead from Truex Jr. Luckily for Larson, he managed to hang on for a second-place finish. That performance has landed him a start alongside Truex this week. The last time he started on the outside pole, he took home the checkered flag. Worth noting is this season, he’s piloting a Hendrick-powered car. His new team has won almost once in every three runnings at Dover. It could happen again at the Drydene 400.

In keeping with the premise of the Hendrick Dover domination, enters Chase Elliott. In ten career Cup starts here, he has seven top-10 finishes including one win. His only blemishes have come by way of a 12th place finish in 2018; a blown engine eight laps into the Fall 2019; and a crash that took him out six laps into the Fall race last season. The defending series champion also boasts 321 laps lead on this track placing him fourth on the list of total lap leaders in the last six seasons.

Chase Elliott knows how to win at Dover. pic.twitter.com/NxWc4whXOy

Elliott is coming off of back-to-back solid runs where he has worked his way up from the back or the middle of the pack to score a top-10 finish. Last week, he was shuffled to the rear from his sixth-place starting position. He navigated his way through plenty of turbulence on his way to a seventh-place showing. If he can stay clean this week, he should be in for another solid day. If you believe in patterns, his last four finishes at Dover have been 5, 38, 5, 39. Do with that what you will, but another 5th place would give you a 39 point baseline on which to build on with any fast laps and laps led throughout the day. Not a bad way to anchor your Drydene 400 DraftKings lineup.

The #48 has crossed the finish line in first place more times at Dover than any other car in the history of the track. Of course, each time it did, Jimmie Johnson was behind the wheel. Now, Alex Bowman has the honor of piloting a car that has made victory lane at the Monster Mile its home. In his short Cup career thus far, Bowman has been pretty good himself on this track. His Hendrick #88 has placed inside the top-5 in three out of its last four races here. Last fall’s Dover race was a great day for Bowman. He started back in the 21st position and drove his Acronis Camaro to a fifth-place finish.

Things got WILD after a late restart in Dover today. pic.twitter.com/CAjKSl1TBH

So far, his start in the famed #48 car has not been as successful as the man who recently vacated it. It hasn’t been all that bad though as he has been able to drive it into victory lane once at Richmond. He’s coming off a rough stretch of three races in which he finished outside of the top-15. That said, expect the Hendrick team to bounce back this Sunday and remind the rest of the field why they are so dominant on this track. Bowman should be able to find his way to the front of the field and stay close at the finish of the Drydene 400.

True punt plays on this slate may help you take down a tournament. Although, if last week proved anything to us, it’s that slightly more expensive climbers with the potential for a top-15 finish are more valuable in that situation. Cole Custer might just turn out to be a week-winner at Dover on Sunday. His two Cup starts on the Monster Mile, both last season, have yielded both an 11th place and a 10th place finish. In six career Xfinity Series starts, he has five top-10 finishes. His lone outing without a finish among the first ten cars was when he finished 13th back in the Spring of 2018. His last race with the lower circuit on the track was in the Fall of 2019. That day, he took home the checkered flag.

He finds himself mired in the rear of the field this week after two disappointing finishes in as many weeks. In fact, he hasn’t very much enjoyed the opening scenes of his second full-time season in his Cup ride. So far, he only has one top-10 finish. He also has failed to place inside the top-20 in all but three races. All that said, in his first race at Dover, he drove all the way to an 11th place finish from a 21st place start. If he has that kind of day this week, he’ll turn a tidy return on investment for your Drydene 400 DraftKings rosters.