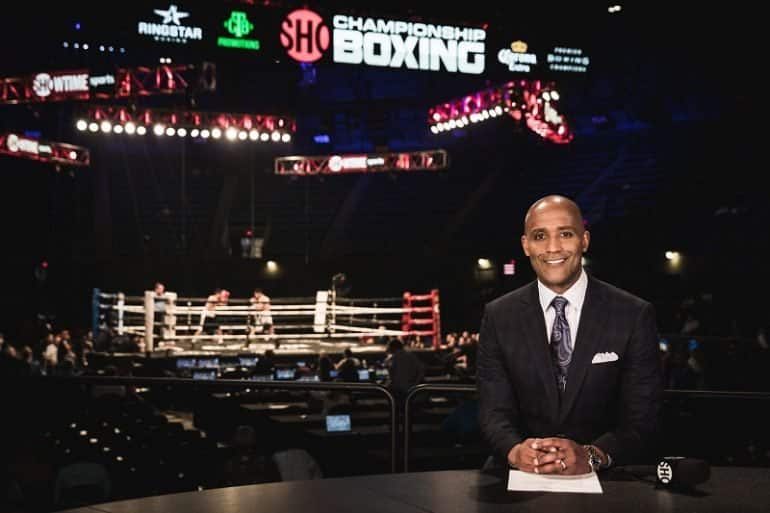 A recap of the Canelo Alvarez mega-fight win in Arlington, Texas, and a preview of the opening fight for “Showtime Championship Boxing” on a big Summer slate is all part of our latest show.

Host T.J. Rives is back with guests to go over Canelo’s 8th round TKO of England’s Billy Joe Saunders and get ready for the World Junior Featherweight title fight Saturday night in Southern California, as Luis Nery takes on Brandon Figueroa. T.J. and Marquis John’s, senior writer at BigFightWeekend.com, are joined by Brian Custer, host of Showtime Championship Boxing, which will have the Nery-Figueroa fight on Saturday night.

The guys discuss first Canelo’s victory in front of an indoor record crowd of 73,000 fans last Saturday night in the “Lone Star State.” We give Canelo his props and wonder what’s next for the super middleweight champion? Will, it possibly be IBF 168 lb. champ Caleb Plant or might it be another big name moving up?

Then, Brian goes over Saturday night Showtime fight card and the roll call big bouts involving the Charlo brothers and also Gervonta Davis having huge main events on Showtime as this summer unfolds.

It’s a bit of a spectacle, but go here for the Logan Paul vs Floyd Mayweather odds.

Then, in the final segment of the podcast, Marquis is back with T.J. to discuss all the news of the week, including what’s the latest on the never-ending saga of will Anthony Joshua and Tyson Fury ever fight this Summer? Or will Fury specifically walk away to fight someone else soon?

And, they preview further the Showtime card in Southern California, including some gambling odds and which Underdog that Marquis actually likes as a betting play for Saturday night?

Hear it all on the Big Fight Weekend podcast and make sure to subscribe/review us on Apple podcast, Spotify, Google, Etc. and read up on everything boxing on BigFightWeekend.com!