Best Prop Bets for the Masters 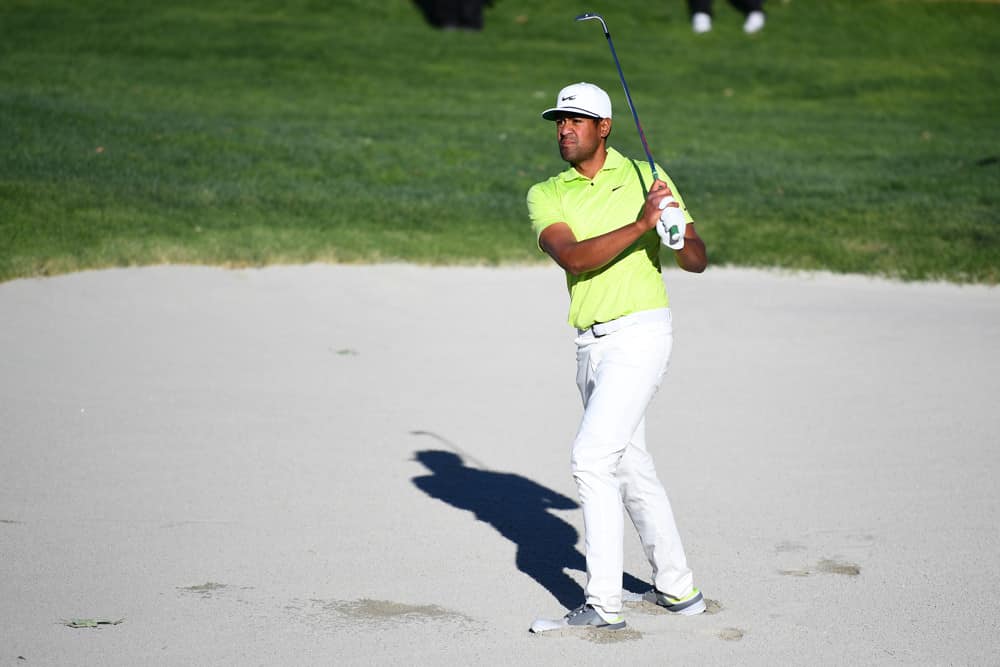 Best Prop Bets for the Masters

Prop bets can be one of the most profitable avenues for gamblers at a golf tournament. And at the Masters, the books pull out all the stops and allow someone to bet on almost anything.

Here are some of the best prop bets for the Masters (odds courtesy of PointsBet, *Promo Code SGP*).

Tony Finau hasn’t played well lately. That’s ok. It wasn’t so long ago that he finished runner-up at Torrey Pines South and Riviera Country Club. Both golf courses are demanding tee-to-green and typically feature similar leaderboards as Augusta National. Overall, his long-term ball-striking numbers look fantastic, especially with the irons. His solid scrambling will also come in handy should Augusta play as firm as advertised. He already has two Top 10’s in three tries at the Masters. This year should make it a third at close to 3/1 odds.

Hovland hasn’t appeared in many majors in his young career. While he hasn’t yet posted a Top 10, he’s flashed promise. Hovland was wildly impressive as an amateur at the 2019 Masters and the 2019 U.S. Open. He also placed T13 at a firm and fast Winged Foot last fall. He comes into this week in great form at a tournament shaping up to favor the ball strikers. A firm and fast Augusta National places an emphasis on consistency tee-to-green. That’s Viktor Hovland’s specialty. A breakthrough for his first Top 10 in a major is very realistic for young Viktor Hovland this week. Bet him 3/1 to do just that.

Max Homa’s two career victories have come on big boy golf courses. Anyone who takes down a win at Quail Hollow or Riviera Country Club is capable of playing well just about anywhere. Both golf courses are very demanding tee-to-green and require very strong ball-striking to succeed. That’s a great recipe for success at the Masters. He also is in great form, as he’s gained over a stroke per round tee-to-green in his last four tournaments. His first Masters did not go well for him. Expect a much better performance this time around.

There are many ways to bet the hole-in-one prop at the Masters. Historically, aces come to Augusta National on 16 on Sunday. The last time an ace wasn’t at 16 on Sunday was on Hole No. 6 by Jamie Donaldson in 2013. And up until last year, a hole-in-one happened on Sunday on 16 in three of the last 4 Masters.

But last year, the Green Jackets got one over on the gamblers. Instead of utilizing the traditional Sunday pin placement on 16 that yields plenty of aces, they put the Sunday pin on the right side of the green on top of the shelf. It was a complete surprise to a lot of people, especially those who pounded Yes on this prop.

This year, we get our money back and then some. With patrons returning to the golf course, 16 on Sunday will feature the usual thrills anytime a tee shot comes tumbling down the slope. Not only will the patrons roar as the ball tumbles into the cup, so will bettors when they bet YES at +140 on a hole-in-one on 16 in Round 4.

Number Of Players Finishing Under Par – Under 22.5

Dustin Johnson set the scoring record at the Masters last November. And in all 43 players finished the tournament under par. Augusta National played much softer than in previous years due to a combination of mother nature and the need to water the golf course to help the overseeded ryegrass take root. Players fired at pins all weekend and stopped the ball on a dime. That’s something that isn’t usually seen at Augusta National.

This April, things will be different. By all accounts, Augusta National is playing very firm and fast. And though rain is in the forecast during play, the golf course should retain enough firmness to make it a much more difficult track. Both the weather and course conditions are shaping up to recreate a Masters much like 2013 and 2014. Both of those Masters featured a firm golf course with moderate winds out of the west. That made scoring tough.

Bubba Watson is typically known as a horse for the course. But his career at Augusta National is very boom or bust. Outside his two victories, he only owns one other Top 10 finish. He missed the cut at the Masters in 2017 and had to hustle on Friday to make the cut last November.

He also comes into this tournament struggling. While he advanced to the group stage at the Match Play, his performance at stroke play events has been lacking. He’s struggling with his irons, scrambling and putting coming into this week. That’s a bad combination for a firm and fast Augusta National. Look for Bubba Watson to be a surprise cut after Friday.

Other Missed Cut Props to Consider

There’s not a lot of stiff competition for Will Zalatoris here. Only six players will make their first start at Augusta National this week. Three of them are amateurs. While Robert MacIntyre has a bright future, unfortunately, he hasn’t made much noise in stroke play events here in the United States. And Carlos Ortiz is a much more inferior ball striker than Zalatoris. It’s possible that Zalatoris has this one wrapped up at the end of Friday. Bet him +125 to be the low fresh face at Augusta National.

There are a few players who are dead money in the Top Senior prop. It would be very surprising if Mike Weir, Jose Maria Olazabal, Larry Mize, Sandy Lyle, and Ian Woosnam made the weekend. Vijay Singh didn’t make the weekend in four of the last five years. So this is a three-horse race between Mickelson, Langer, and Couples.

The expected weather and course conditions at Augusta National favors Bernhard Langer’s game. Langer still hits the ball on a rail off the tee, and with firm fairways, the ball should roll out a good distance. He won’t have as long of approaches into greens as he has when the fairways are soft. He also played very well in tournament conditions that might resemble this week. In 2013 he finished T25. In 2014 he finished T8. The conditions he’ll face this week should be ones that favor him.

He also has made the cut in four of his last five Masters. And he’s been mildly competitive in that stretch. He’s finished inside the Top 40 three times in the last five Masters. At +450, he’s a good value to finish as the top senior at Augusta National.

As for Sungjae Im, he’s getting some love this week because of his runner-up finish at Augusta National in November. But last November played to his strengths, as it favored strong drivers and good putters. This Masters is setting up to favor better iron players and scramblers. Those are Sungjae’s weaknesses. Fitzpatrick should beat Sungjae head to head.

After a prolonged slump, Matt Kuchar seems to have found some form. Sometimes a good result at the WGC – Match Play can be misleading as a player doesn’t need his best stuff in order to advance. But Kuchar was legitimately good tee-to-green and on the greens at Austin Country Club. He then followed that up with another very impressive performance at TPC San Antonio. He has a great history at Augusta National and the golf course is setting up to suit his strengths. He should be a factor yet again this week.

As for Justin Rose, while he also has a good course history there are so many unknowns in his game. He’s been sidelined with a back injury for the last few tournaments. And even before the injury, the form wasn’t strong. Matt Kuchar should come out on top of Justin Rose at the Masters.

After fading one player with a balky back, why not fade another one. Louis Oosthuizen was riding very solid form heading into the Arnold Palmer but withdrew at the last minute because his back tightened up. Since then, the form has not been the same. He also has gotten by over the last 50 rounds primarily with his putter. That is bound to regress at some point.

Meanwhile, Sergio Garcia’s ball striking is in peak form. He’s been so efficient tee-to-green that he’s been able to overcome his putting woes. Because of the huge advantage Sergio has with ball striking, that’s enough to take him over Louis at the Masters.