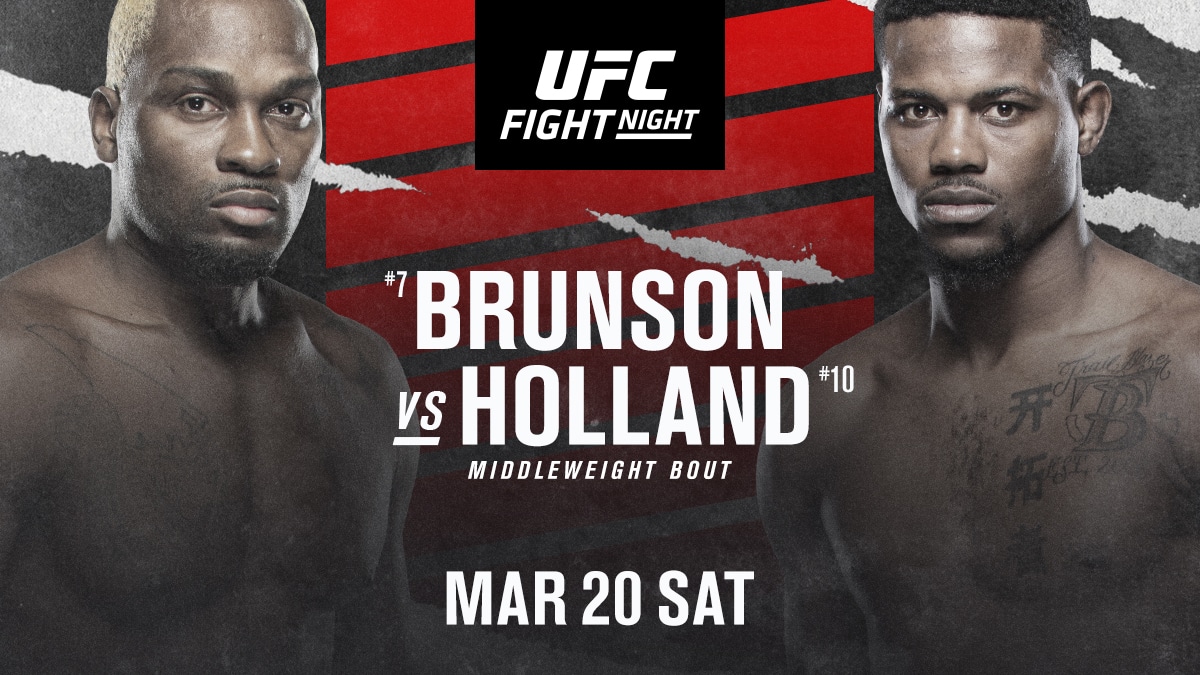 A killer performance last week at UFC Vegas 21 has me back at .500 for my UFC picks in 2021, and I plan on keeping that upward trajectory with my UFC Vegas 22 predictions. Nothing but winning picks from here on out, promise, cross my heart.

The welterweight main event is a tough one to pick for me, as I can see paths to victory for each man. I’ve decided to go with the bigger, younger, more explosive of the two fighters in Kevin Holland. Derek Brunson, while on an impressive run knocking off young prospects, is 37-years-old and has been knocked out five times in his career. I’m looking for Holland to make it six straight wins on Saturday, maybe via a crazy knockout.

After eating his first L in November of 2019 (via a head kick KO, no less), Gregor Gillespie returns to the octagon. Hopefully the time off has allowed him to heal up the aforementioned head and he’s back to his dominant, wrestle-heavy self. Brad Riddell has been taken down multiple times in all three of his UFC fights thus far, which doesn’t bode well for him this weekend.

Two women’s strawweights making their debut here, with Montserrat Ruiz doing it on short notice. I’m going with the bigger, younger Cheyanne Buys to win this one, but I suggest steering clear of a number this high for this fight. With debuting fighters you never really know what you’re going to get.

Going chalk again here with Adrian Yanez. A winner via knockout in his UFC debut, he’s bigger, younger and a better striker than Gustavo Lopez, making him a winning pick for me (at least I hope).

Finally riding with a dog in Song Kenan. He’s bigger and younger, which you know I a sucker for, but also has won two straight and four of five. And Max Griffin hasn’t exactly lit the UFC world on fire, going 4-6 thus far. Worth a roll of the dice at plus money (although my MMA Gambling Podcast co-host disagrees here).

Tai Tuivasa (-310 – not posted on PB yet) vs Harry Hunsucker

Harry Hunsucker is taking this fight on less than a week’s notice, hasn’t shown in the past to be “UFC caliber”, is knockout-prone, and sounds like a character from Mike Tyson’s Punchout. Tai Tuivasa via early knockout is the way to go here.

At 43 years young, Marion Reneau is now the oldest fighter on the UFC roster. Sadly, I don’t predict this fact to be true for much longer, as a loss on Saturday would make it four straight for her and surely earn her a pink slip. Not only is Macy Chiasson 14 years her junior, she’s way bigger and has the makings of a real top prospect at women’s bantamweight. This is my “lock” pick for the night.

One of these fighters will be no longer be able to refer to themselves as undefeated in the UFC after Saturday, and my prediction is it’ll be Leonardo Santos. Grant Dawson is also 14 years younger than his opponent this weekend, and has the relentless pace and striking and grappling chops to keep the 0 in his record.

I’ve got another live dog here for you in Trevin Giles. Coming off a TKO victory, Giles is also four years younger than Roman Dolidze. But the real reason I like this pick is Dolidze is taking this fight on short notice and usually fights a weight class higher at light heavyweight. Cutting an extra 20 pounds on short notice doesn’t seem like a recipe for success to me.

Wow – look at that number. Montel Jackson is bigger and younger and more experienced than the debuting Jesse Strader, who has been out of the cage for almost two years, but I’m staying away from -750 lines.

JP Buys is the other half of the debuting husband-wife duo (see Cheyanne above), and I’m predicting the pair leave the UFC Apex on Saturday both winners. Bruno Silva has lost all three of his UFC fights (one of them was overturned to a No Contest due to a failed drug test) and Buys is (all together now) bigger and younger.

You’ve got to ride with someone nicknamed the ‘Raging Panda’, right?! Opponent Julija Stoliarenko is 0-2 in the UFC, while Julia Avila is 2-1 and has the reach and striking stats in her favor.