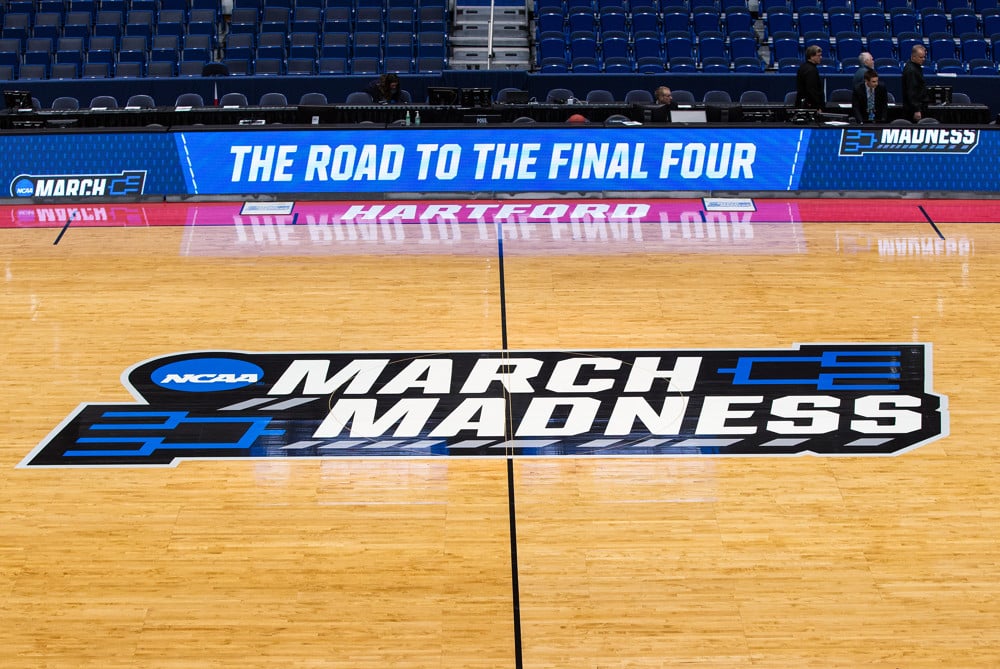 Degens, unite. We finally have March Madness back after two long years. This means we are for another year of the March Madness block pool. Let’s do a quick recap of how it works before we dive into the numbers. The block is similar to the Super Bowl block pool, but with a lot more payouts and a lot more fun.

While skipping over 2020, this is the 10-year anniversary of running the pool, with my friend, Erik, and watching Madness has continued to be, well, madness. At the end of this year’s tournament, we will have accumulated 640 payouts valued at over $140,000. Once your bracket busts halfway through the 2nd round you are usually left unfulfilled throughout the rest of the tournament. These payouts keep you in it until the clock hits 0:00 in the Championship game. This is truly a #DegensOnly block pool.

The block is set up like a traditional Super Bowl block pool, but with the “Winner” and “Loser” across the top and side, respectively. Each game has a winner and a loser, so you guessed it; there are 64 payouts from Round 1 (The real Round 1, not the First 4 play-in games.) through to the Championship of all 63 games. A Championship half time payout is thrown in for the big game. Your block could hit as many times as your Winner/Loser combination comes out throughout the Tournament. For example, if Virginia beats Virginia Tech- 71-62, the winning block would be Winner 1-Loser 2.

You can set up your price per block as you see fit. We have increased the price 400% since the start 10 years ago due to the demand. There is still a waiting list every year. You can also set your payouts by round as you see fit. We found that allocating half of the pot from the Elite 8 through to the Championship really raises the stakes as the tournament hits the regional finals.

The beauty with a basketball block pool, unlike with football, is that there is not a “bad” combination of numbers. I have been keeping data over the last 9 years. Since 2011, when we started our pool, every block combination has hit at least one time.  The last block combination to hit was Winner 2-Loser 4, which finally came through in 2019.

Sure, some blocks have hit more than others have, but on average, each block combination has hit 5-6 times in the last 9 years. Also, each year, on average, 47 of the 100 blocks are a winner. You may not get your full investment returned if you hit in the first round, but you are at least in the running for a 50% chance of your block hitting throughout the Tournament with a chance to win 15x your investment in the Championship.

Based on the ending numbers in the block pool, as you could have double-digit wins, the 2-point spread, followed by the 4-point spread, are the most common spread frequency over the last 9 years. This is right in line with the most hit block: Winner 2-Loser 8, along with some other most frequent/number of hit blocks: Winner 9-Loser 7, Winner 7-Loser 5 and Winner 3-Loser 1.There is always a lot of interest in the pool. The most common question we get about the block pool is, “Is there a most frequent and most hit block in the past 9 years?” Well, it is actually two blocks: Winner 2-Loser 8, Winner 9-Loser 7. The blocks have hit 13 and 11 times, respectively, and both blocks have hit in 8 of the 9 years of our pool. Three other blocks have hit 11 times in that period: Winner 1-Loser 6, Winner 7-Loser 5 and Winner 3-Loser 1 and have hit in at least 6 of the 9 years. There are almost 20 other blocks that have hit at least 67% of the time over the past 9 years. There hasn’t been one block that has hit every year. Side note: Winner 0-Loser 0 did not hit for 6 years but hit three different times in the 2017 Madness tournament along with hits in 2018 and 2019, which has made the block profitable over the 9-year period due to hitting in the later, higher-paying rounds of the tournament.

So the Winner 1-Loser 6 block, which has hit 11 times and in 7 of the 9 years, can be seen as an outlier as it is a 5 point spread. Then again, about 98% of the blocks are considered close to the average of hits over the last 9 years. This reiterates the fact that there are not any “bad” numbers to have in a basketball block pool. Of the 576 winning blocks, the number of hits per block is spread evenly and close to the five-six hits, on average, from 2011-2019.

Without a doubt, when we distribute the picked numbers each year, which we randomly draw, someone will complain about drawing a “double number.” Since there are no ties (besides for halftime of the Championship), this means a team would have to win by 10, 20, 30, etc. points. Do these hit? Of course, they do. In fact, the Winner 1-Loser 1 block is the most frequently hit block in the past 9 years from the Elite 8 through to the Championship, which are the larger money rounds. It has hit four times while nine other combinations have not reached three hits but have all hit twice from the Elite 8 through to the Championship.

Speaking of larger money block hits, there were 72 of them in the past 9 years, as stated above, only 10, or 13%, of the block combinations have hit at least twice. There truly is a random chance each year that any combinations of numbers can hit it big.

Moreover, 18 different spread combinations that have hit in the Elite 8 through the Finals from 2011-2019 and the hits on these spreads are somewhat evenly plotted, discounting the one-time hits, not to mention that half of the games have been double-digit wins. One of our most hit and most frequently hit number combination, Winner 2-Loser 8, has hit twice in the Elite 8 through the Championship. This means the block is profitable and hits frequently. 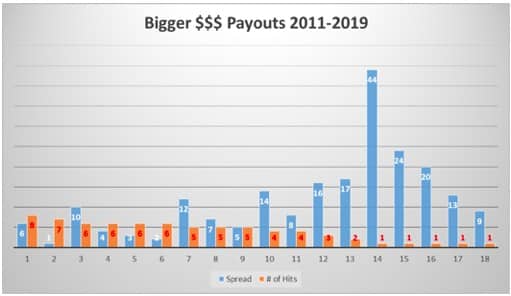 The last few minutes of each Madness game is filled with so much excitement. You find yourself going through the math exercise to hit your block. “I need team A to hit a three and Team B to get fouled and miss a free throw.” The madness goes down to the buzzer in each game. I hope you create or join a #DegensOnly Madness block pool to experience the Madness for yourself.