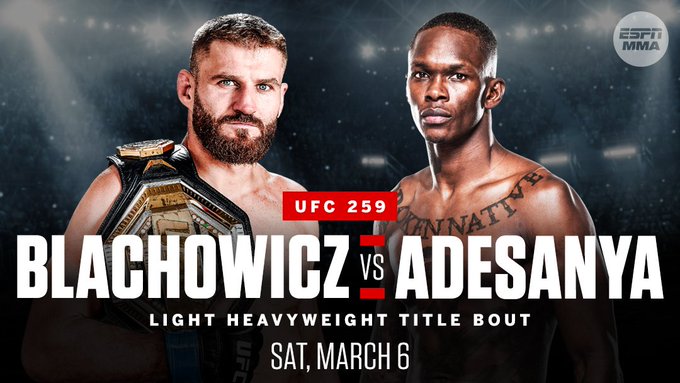 The best fight card ever?! If it isn’t, it’s damn close. This Saturday’s UFC 259 has four champions on it and three title fights, headlined by a champion vs champion fight. And the undercard is pretty damn solid too. So, without further ado, let’s get into my totally 100% accurate UFC 259 predictions.

Saturday’s main event sees two champions collide for the UFC Light Heavyweight Championship. Newly crowned king Jan Blachowicz will welcome UFC Middleweight Champion Israel Adesanya to the 205-pound division. While Blachowicz will be the bigger, stronger fighter on Saturday, Izzy will be taller and longer and the much faster man. He’s also a dynamic striker, which I think will carry the day for him here and allow him to become a much coveted “champ-champ”.

Not much to say here – UFC Women’s Featherweight and Bantamweight Champion Amanda Nunes is the GOAT of women’s MMA, and Megan Anderson is – well – not. Anderson will be the longer and younger of the two, but that is pretty much her only advantage in this featherweight title fight. Nunes will win, and probably via early stoppage, so a prop bet might be your best path here if you want to bet this fight.

The third title fight – for the UFC Bantamweight Championship – is a much harder one to predict, as the close betting line suggests. It’s one of the many tough UFC 259 predictions to make for Saturday, but that’s what I’m here for – to make the tough calls for you. I’m going with new champ Petr Yan to retain, as he’s the more dangerous striker and has only lost once in his pro career, but this should be a tight one.

This is not one of the aforementioned difficult UFC 259 predictions. Islam Makhachev is a monster in the cage, the closest thing we have to Khabib Nurmagomedov. Despite being out of action since September of 2019, I expect him to get past the streaking Dober.

Aleksandar Rakic is a bit of a sleeper in the light heavyweight division, despite going 5-1 in the promotion (only losing a split decision to Volkan Oezdemir). After beating another former title challenger in Thiago Santos on Saturday, he should be slept on no longer. He’s bigger, younger, and has superior striking and grappling stats than Santos, so the W should be his.

This fight could be an official changing of the guard in the bantamweight division, as I’m picking up-and-comer Casey Kenney to best former divisional great Dominick Cruz. The oft-injured Cruz has lost two straight, and hasn’t won a fight in almost five years, while Kenney has won three straight and five of six UFC fights.

A couple of young prospects collide in yet another bantamweight bout, and I’m going with the younger – yet more experienced – of the two in 23-year-old Song Yadong. He’s 5-0-1 in the UFC and has a far better resume than Kyler Phillips

Joe B is a legend in the sport, but after being brutalized in his past two fights against flyweight champion Deiveson Figueiredo, I can’t bet on him physically being the same fighter any longer. I’ll go with the bigger, younger, undefeated Askar Askarov.

I’m finally picking an underdog, and hopefully I’ve got a live one here in flyweight Rogerio Bontorin. While I like Kai Kara-France as a fighter, I’m counting on Bontorin’s grappling prowess to win this battle.

Three straight flyweight fights on Saturday’s card – no complaints from me, it’s one of my favorite divisions. I’m going with the bigger, younger fighter in this matchup that is basically a pick ’em on the board. Tim Elliott loses by submission often, so you might want a Jordan Espinosa prop via submission in this one.

Carlos Ulberg is the smaller, older, far less experienced fighter in this matchup, yet he’s the big favorite. That’s because he’s shown enough explosive striking in his three pro MMA fights (all wins) to make him feared.

This is a helluva welterweight prospect matchup to be on the early prelims – shows you how stacked this fight card is. I’ll roll the dice and go with the younger but much more experienced Jake Matthews to prevail. Need to hit on some decent dogs, and I think he could be one.

Amanda Lemos used to fight at featherweight (135 pounds), so she’ll have the size advantage in this strawweight (115 pound) fight. She’s also the better fighter with a better resume, so she’s my pick.

The debuting Uros Medic is my “lock” on this card. A perfect 6-0 as a pro, all wins coming via finishes (four knockouts, two submissions), he’ll be the superior striker on Saturday and the younger fighter.

Mario Bautista is taking this fight on short notice, which usually results in a loss for a fighter, but I’m thinking he can handle Trevin Jones. He was in camp training already when he got the call for this fight, is the superior striker, and is younger and bigger.