Missouri Valley Conference Tournament: Keep An Eye On This Mid-Major 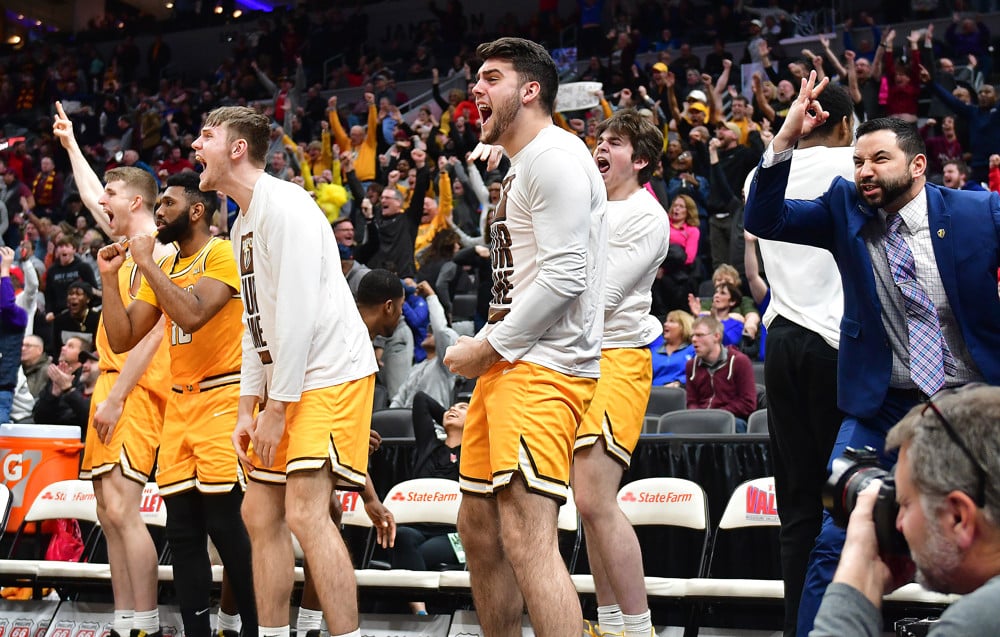 The Missouri Valley Conference Tournament, also known as Arch Madness, is one of the few conference tournaments that took place last year before the pandemic shut down the world of sports. Fourth-seeded Bradley made a run as they knocked off seventh-seeded Valparaiso for their second straight title.

You must be asking “why should I be so interested in this mid-major conference?” Let’s look at the recent history of the Missouri Valley Conference Tournament champion.

Missouri Valley Conference Tournament: Who has the best chance to win?

Loyola Chicago has put together another stellar season finishing as the Missouri Valley regular-season champions and a top-25 finish in the nation. PointsBet currently has the Ramblers sitting at -300 odds to win the Missouri Valley.

Senior center Cameron Krutwig, the Ramblers’ leading scorer, is the conference’s fifth-leading scorer and sixth in blocks. He is the anchor of this team with his style of play and experience being on that final four Loyola team as a freshman. They also have senior guard Lucas Williamson who is second in the conference with 1.5 steals per game.

This team is anchored on their defense. Not only are they the number one defense in the Missouri Valley allowing 55.7 points per game, but they are also number one in the country. Fun fact to note, Loyola Chicago has not allowed a team to score over 60 points since they gave up 76 points to Indiana State on January 10th.

Well not that Drake, but this Drake is extremely good at basketball. And also unlike Aubrey “Drake” Graham, Drake basketball is incredibly efficient at shooting the ball. They are shooting at 50% from the field and have the best scoring offense in the Missouri Valley at 78.1 points per game.

They also can defend allowing the second-least points per game and the most steals per game in the conference. The Bulldogs put on an absolute clinic this season with a 20-5 ATS record – good enough for second-highest in all of college basketball.

Talent is not the issue for the Drake Bulldogs, they do everything you could ask them to. Their issue is the injuries they have faced in the last month. Drake lost senior Shanquan Hemphill, their leading scorer, to a broken foot against Northern Iowa. And to make matters worse, just a few games later they also lost their starting point guard, junior Roman Penn, who leads the Bulldogs in assists. He also suffered a broken foot.

Drake adjusted and found a way to split the series with an incredibly talented Loyola team with just Hemphill out, but Penn’s absence is starting to stretch the Bulldogs incredibly thin.

Here are the number of minutes that Drake’s starting guards have spent on the bench in the three games combined without Penn or Hemphill:

Drake has an incredible amount of talent on their team, however, they are working with a short bench and will need to find a way not to have their starters gas out as the tournament progresses. PointsBet currently has Drake at +325 odds to win the tournament, the second-best odds in the conference.

We have to talk about the reigning back-to-back conference champions who are getting an incredible value at +8000 odds via PointsBet. Now is this the same Bradley team? No. They are eighth in the conference with an abysmal 6-12 conference record.

Bradley has the talent, finishing with a top-five offense and defense in the conference. The shortcoming for the Braves, much like Drake, is the lack of their star players.

Prior to the Missouri State series, the Braves suspended four key players including senior Elijah Childs and junior Terry Nolan Jr. Childs is sixth in the conference in scoring and second in rebounds while Nolan is ninth in assists.

Of the four, the only one to return from suspension, Ja’Shon Henry, returned only to leave in his second game back in a walking boot. Without Henry (again), the Braves will be down their top three leading scorers if Childs and Nolan are not back.

A huge cause for concern, however, the Braves somehow managed to rally and beat a (still) good Drake team in the season finale. If the Braves can continue to get inspired basketball from the players, then they can attempt to make some noise in a very strong conference this year.