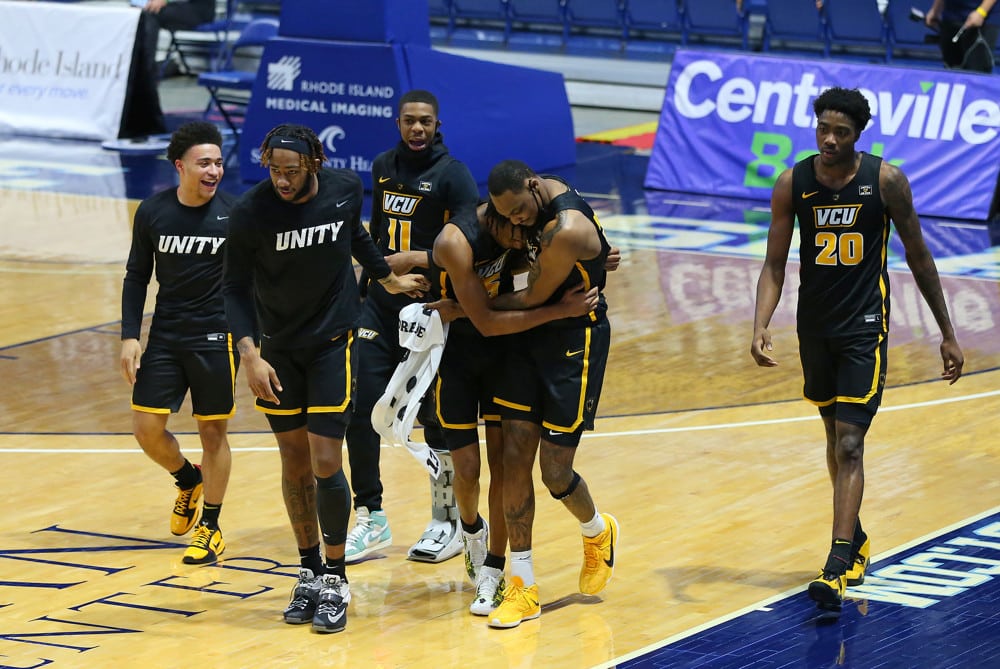 356 days after being cancelled due to the coronavirus pandemic, the Atlantic 10 Conference Tournament is back and hopefully this time to finish the job. However, instead of being held at the Barclays Center in Brooklyn, NY, the tournament will be split with games being played in Richmond, VA (hosted by both VCU and Richmond) and Dayton, OH (hosted by Dayton). So much has changed with these teams over the course of a year that there are multiple players in the conversation for the A-10 Championship this year.

The first round will consist of two games: Saint Joseph’s vs. La Salle and Fordham vs. George Washington. Unlike the others, Saint Joseph’s is coming into the A-10 Tournament on fire. Since their COVID-19 pause in early February, the Hawks are winners of their last three with wins against La Salle, Dayton, and at Richmond. They are led by a pair of upperclassmen guards, Ryan Daly (Senior) and Taylor Funk (Junior).

Daly, last year’s A-10 leading scorer, would technically be the conference’s leading scorer this year—however, he missed ten games due to a thumb injury. Since his return, Daly is averaging 23 points on 50% shooting (39% from three), 3 assists and 7.7 rebounds sparking Saint Joseph’s run. Funk is top 10 in the A-10 in scoring and has scored 17+ in 10 of 18 games this season.

With the duo, Saint Joseph’s has no problem scoring the ball as they light teams up for 72.5 ppg—fourth in the A-10. Their problem is on the defense is they give up way more points than they score as they allow 82.6 ppg—dead last in the A-10. If Saint Joseph’s can find a way to slow down opposing teams’ offense, then they had the ability to steal a couple of games and advance in the tournament.

The second round is highlighted by 5th seed UMass, who are coming into the tournament off back-to-back road losses to Richmond and St. Louis. This team has been battling COVID all year finishing with only 13 games played.

Nonetheless, the Minutemen battled back to a 6-4 conference finish, however, zero of their wins have come against one of the top 4 teams in the conference. They hold the third-ranked A-10 offense, led by sophomore Tre Mitchell, but against teams with an actual winning conference record, they are only averaging 68.5 ppg. UMass struggles shooting the ball with below-average field goal and three-point percentages. And just to make matters worse they have one of the bottom-four defenses in the A-10. It could be partially because of COVID and not finding their rhythm, but the Minutemen appear to not have the firepower to contend with powerhouses in the A-10 and should be closely monitored.

Despite the low expectations for the VCU Rams, head coach Mike Rhoades has coached a very young team to a second-place A-10 finish. They are the odds-on favorite to win the A-10 tournament at +225 via PointsBet.

The good news is that the team is optimistic that both will be ready to go for their first game on Friday. That will be crucial for the Rams to make a run for the title. They sport a top-five offense and defense in the conference. To add, the emergence of freshmen Adrian Baldwin on both ends of the floor has given the Rams a tough defender that can go toe-to-toe with the best guards in the conference.

Saint Louis is another team that got bit by the COVID bug. After a month layoff from December to January, they returned to play with back-to-back losses at home to Dayton and on the road at La Salle. Since then, they finished the season strong with a 6-2 record to finish fourth in the conference.

The Billikens are the only team, along with VCU, to be top five in offense and defense in the A-10. They score 76 ppg, most in the A-10, led by senior guards Javonte Perkins and Jordan Goodwin. Contrary to the VCU, Saint Louis is an older team that has been around long enough to dig themselves out of situations and come up big. Which makes it not surprising that PointsBet has them as the second favorite to win the A-10 at +250 odds.

The A-10 regular-season champion St. Bonaventure Bonnies pose as a nice value to thwart the Rams’ chances at the A-10 title at +400 odds via PointsBet. The Bonnies often find themselves struggling on the offensive end of the ball with an offense that ranks in the bottom half of the A-10. On the flip side, who needs to put up an amazing number of points when you bolster the top defense in the A-10 allowing 60.6 ppg.

The defense will need to be a staple in the Bonnies’ gameplan if they want to capture their first title since 2012. That will not, however, be the sole reason to carry them to the title. The guards, led by junior Kyle Lofton, will need to lead them offensively to take pressure of the defense. The Bonnies are 7-0 when they shoot above 45% this season.