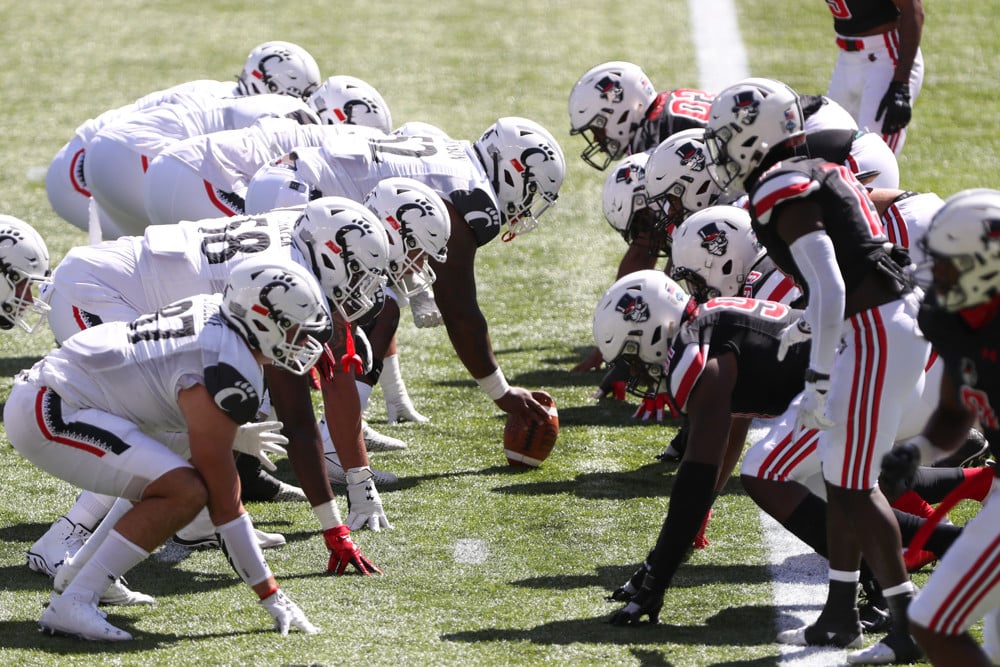 McNeese State and Tarleton State provided an outstanding appetizer last week to the Spring NCAA FCS Football season. This weekend the main course is served and there will be more than enough action to fill your plate. Friday night will kick off a 12-game buffet of Championship Series football that spills into Saturday and Sunday. Keeping up with some of them may be difficult as only a handful will be available to watch on the ESPN+ streaming network. This should not talk you down from participating in the betting available for these games though, which is where this article aims to help.

Here is a breakdown of a few of the games worth betting on this weekend. There are several games with huge spreads and others that are not all that appealing from a betting standpoint. So I’ve identified games with the potential of cashing your bet. Hopefully, you were able to read last week’s offering as the McNeese bet ATS bet as well as the over in the game both hit. Hopefully, the luck will continue into this weekend’s slate. The team listed with the odds is the team to bet.

The Jackrabbits finished 8-5 in the Missouri Valley Conference in the 2019 season. Among their regular season victories was their Week 11 dismantling of the Panthers. South Dakota State beat Northern Iowa by a score of 38-7 in that matchup. Of course, the Panthers had their revenge in a playoff game that was decided by a 13-10 score in favor of Northern Iowa. Both of these teams should have strong playoff seasons again this Spring.

Northern Iowa looks to be leaning on a sophomore quarterback to lead them. He gets to face a relative unknown in the Jackrabbits defense. As for South Dakota state, they will lean on their running back Pierre Strong Jr. He’ll bring back-to-back 1,000-yard seasons to the field Friday night. The Panthers had trouble with ranked opponents last season winning only twice in six tries. When the two teams met in the regular season, South Dakota State was ranked #8. Look for this to be a tightly contested game with the nod going to the away team.

History is on the side of the Bulldogs in this instance. Samford has won three straight seasons over East Tennessee State. Despite neither turning in impressive performances last season, both battled valiantly in their 2019 head-to-head battle. As hard fought as it was, the Buccaneers fell 24-17 to the Bulldogs. In fact, over the course of their winning streak over East Tennessee, Samford has outscored them by a total of 104-51 points. The Bulldogs have two equally talented quarterbacks to lead them into this unusual season. They will give East Tennessee State all they can handle this week in this early NCAA FCS Football matchup.

Both of these teams posted 7-5 records for the 2019 season. But of the two, the Fighting Hawks boasted a perfect 6-0 record at home. Away from Saluki Stadium, Southern Illinois barely finished one game over the .500 mark closing at 4-3 on the year. Last season, North Dakota scored 209 points at home averaging just shy of 35 points per game. Southern Illinois averaged just over 32 points in their seven away games last season.

A look at the numbers heading into Saturday’s tilt with No. 24 Southern Illinois. #UNDproud | #LGH pic.twitter.com/lCLs11qJCg

The Fighting Hawks will have to stop the Salukis star running back Javon Williams Jr. if they want to win. He rushed for 128 yards and a touchdown on 23 carries in the Salukis fall game against South East Missouri to start their season. Despite this being their first season in the Missouri Valley Conference, North Dakota has a solid foundation and definite home-field advantage. These two teams have only met once before in 2008 with Southern Illinois as the victors in that matchup.

The Governors had a helluva showing last season on their way to an 11-4 record. They made a deep run into the playoffs, only to see their year end in the quarterfinals at the hands of Montana State. They enter the Spring FCS season with three games already in their pockets as they’ve faced Central Arkansas, Pittsburgh, and Cincinnati last fall. Tennessee Tech ended 2019 at an even 6-6 record. That included a 3-3 stint at home including a 58-21 loss to Austin Peay. The Governors are riding a three-game winning streak versus the Golden Eagles. This will more than likely make the fourth.

The Texans certainly burst onto the FCS scene in a memorable way last week. Tarleton opened their inaugural game in the ranks of Division 1-AA football with an overtime thriller against McNeese State. While they didn’t win that game, they proved they are up for the challenge. Quarterback Steven Duncan along with running backs Braelon Bridges and Ryheem Skinner combined for four touchdowns in the 40-37 loss against the Cowboys.

This week, they will set their sights on another cowboy of sorts as they take on the Aggies. New Mexico State is joining the new-look Western Athletic Conference after spending the last two seasons as an Independent. Last season they finished 2-10 on the year testing their might against some heavy-hitting teams including the Alabama Crimson Tide. Tarleton has a tough game under its belt already. They will venture away from home for the first time this season with enough confidence to topple New Mexico state at home.