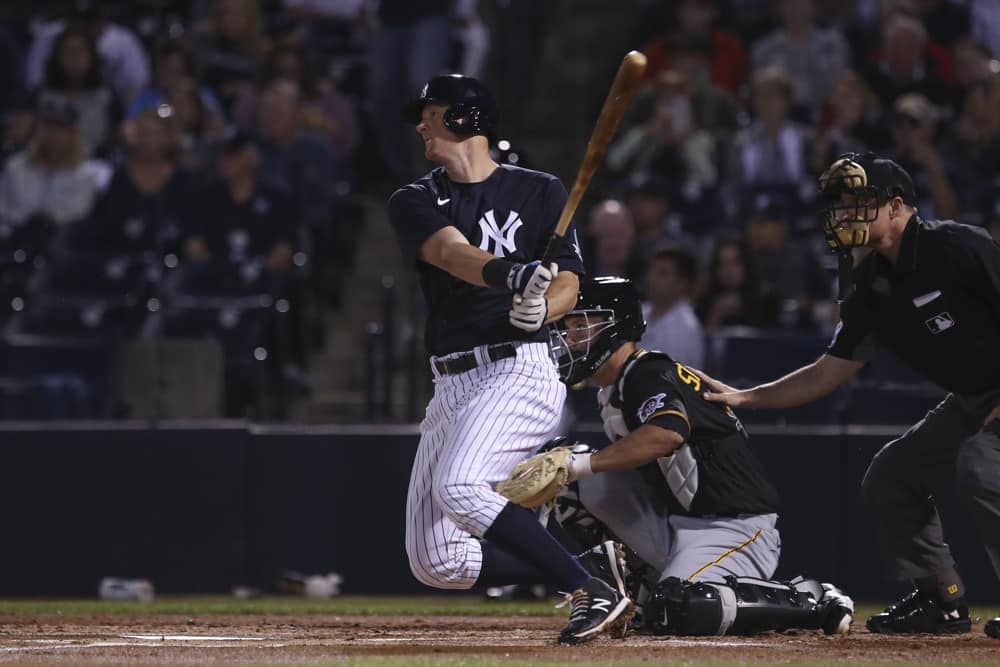 Hello my friends! The 2021 MLB season is creeping up on us, and *fingers crossed* we will have a full 162 game season. Although Opening Day isn’t until April 1st, some books are beginning to roll out 2021 MLB win totals. Join me as I preview each team and share my play on their win total.

This offseason hasn’t been too kind to Oakland. This is a perfect example of a team whose losses greatly outweighs their additions. It’s obviously way too early to know how this team will respond. However, I’m not optimistic about the Athletics’ chances this year given the information available. This team felt fraudulent last season when they had much more talent available. Pitching was an issue for Oakland last year and I have a funky feeling they will be facing a down year in 2021.

Is it just me or does this win total seem too high? The Astros lineup that won the World Series in 2017 (cheating or not) is long gone. There are still a few remaining pieces from that roster, but not enough to impress me. We saw just how unreliable Houston can be last season, and they haven’t done much to help their case. I have a very hard time picturing this team reaching 90 wins after failing to top .500 last year. Unless there’s some magic left in the tank, don’t expect the Astros to be in the running for a World Series pennant.

Seattle was a team that shocked many last year. They had a lot of holes in the lineup but still managed to finish third in the division. Veteran utility player and speedster Dee Gordon was the only real loss for the team this year, and he is replaceable. The addition to James Paxton should beef up their pitching rotation some, which is what they needed. I’m not necessarily expecting the Mariners to make a World Series run or anything. However, they feature a pretty good pitching staff which should provide them enough of a boost to top this win total.

It was a disappointing 2020 season for the Angels, but a shortened season can be disappointing for a variety of reasons. However, I’m high on this year’s squad. They did lose a few pieces of the pie but I feel like they did a good job of replacing those losses. Jose Quintana should provide a nice boost to the starting rotation. I love the addition of Dexter Fowler to this team as well. Joe Maddon coached Fowler in Chicago, and he knows how to utilize him at his full potential. It feels like I’ve said this before, but an 86-76 season should be no issue for this year’s Angels team.

The 2020 Rangers team had a disappointing season for the talent that their roster held. However, things are looking up for them this year. They’ve made a ton of good additions so far this offseason. The Khris Davis trade should provide them with a great boost in terms of hitting, as should a few of the other additions. Kohei Arihara is an unknown name to Americans, but he was a star in the NPB (Chinese professional baseball league) and the transition should be fine for him. I like what I see from the roster of Texas, so I am on the over for them.

The Twins have really come around as a team over the past two seasons. They’ve now won the AL Central two straight years, but I have a funky feeling that run is going to end. Minnesota certainly didn’t look quite as strong in 2020 as they did in 2019, and now they’ve lost a few pieces to the puzzle. Although they did a good job of replacing a few pieces, I don’t think the chemistry will be there. Their divisional competition has gotten stronger while the Twins kind of remained stagnant. Although I expect them to be above .500, I don’t expect them to top this win total.

Don’t look now, but the White Sox are currently the favorites to win the division. They pieced together a strong 2020 campaign and although they lost some players, I believe none were crucial to the team. The addition of Adam Eaton should boost an already potent lineup. Trading for Lance Lynn should solidify the team’s pitching rotation, and they nailed one of the league’s best closers in Liam Hendriks. Although I expect the White Sox to flirt with this win total, given the toughness of the division this could very well be a year that the division winner doesn’t top 90 wins.

I’m not totally sure what to make of this year’s Cleveland team. Pitching was the saving grace for them last season, and I do expect their pitching staff to be tough once again. Offense was a major issue for the Indians last year however, and they didn’t really make any moves that should change that much. Although I’m not extremely high on this year’s team, I do believe they can top this win total. The old saying goes pitching can only take you so far, but a great pitching staff can get you to two games above .500 pretty easy. This is one of my favorite total plays this year.

The 2020-21 offseason has been kind to Kansas City. They did lose a pair of pitchers and Maikel Franco during the offseason. However, they picked up Carlos Santana and Mike Minor in free agency. Santana will add a pop to the lineup and Minor is a solid starting pitcher. The Royals also nailed a great player in Andrew Benintendi in a three team trade, and they didn’t have to give up much to land him either. No one expects KC to be a contender in this division, but I do. This could be the surprise team of the year and I am loving this over.

Detroit’s 2020 season went about like how we all thought it would. They finished the shortened season with the second worst record in the MLB, although many of their games were one run losses. Pitching was a major issue for them last year as they finished 28th in earned runs against per game and 30th in ERA. The Tigers didn’t do anything to address these issues either which gives me some concern. Unless Detroit makes some moves between now and opening day, I believe it’s going to be another long and disappointing season for the Tigers.

Tampa Bay is going to be an interesting team to keep an eye on this year. The 2020 runner-ups lost a few key pitchers in their rotation in Charlie Morton and Blake Snell. Although they did pick up Michael Wacha and Chris Archer to replace them, that is a slight downgrade. However, their batting order will still be just as potent and Kevin Cash is still in charge of the team. I get why their win total is set where it is, but I believe it is too low. They notched 96 wins in 2019 and their batting order is arguably more potent now. Lock it up because the Rays will top this total.

It appears as though the Yankees will once again be reliant on offense to carry them. Their pitching staff left room for improvement last year, and the offseason wasn’t kind to them in this regard. Their starting rotation is very top heavy with Gerrit Cole and Corey Kluber as the only reliable faces. However, their batting order is arguably more potent. The departure of Brett Gardner means that Clint Frazier will step into the starting role, and this is an offensive upgrade. However, 96 wins is a tall task for a team who will have to rely on their bats in three out of five starts.

Toronto is a team that has been trending upwards for a few years. Now their ceiling is even higher than ever after a great offseason. They picked up Marcus Semien and George Springer, which is going to provide a spark to an already potent lineup. They will also feature a good starting pitcher rotation with Hyun-Jin Ryu, Robbie Ray, Nate Pearson, Tanner Roark and now Steven Matz. I’m really big on this year’s Blue Jays squad, and I could even see them competing for the division title. I’m on the over for Toronto as I expect big things from this team this year.

The Orioles are a team that seemingly improved last season. Now, they’ve had a decent offseason where they didn’t really lose anyone they couldn’t afford to lose. Although they exceeded expectations last season, I believe they were a team that benefited from the shortened season. I believe that Baltimore will continue to be a bottom-dwelling team despite the addition of Freddy Galvis. This win total seems to be set right around where I figured it would. Although I’m not actually going to wager this, I am leaning to the under for the O’s this season.

After a disappointing 2020 campaign (especially by Boston’s standards), the Red Sox look primed for improvement. Their batting order is going to be improved this year with the addition of Kiki Hernandez and the slugger Hunter Renfroe. However, their pitching staff struggled massively last season and they didn’t do much to address this issue. Oddsmakers have this total set at 80.5 which seems about right. The thing is that I have a hard time trusting a team whose pitching staff has this many holes, so I am playing the under on the Red Sox this year.