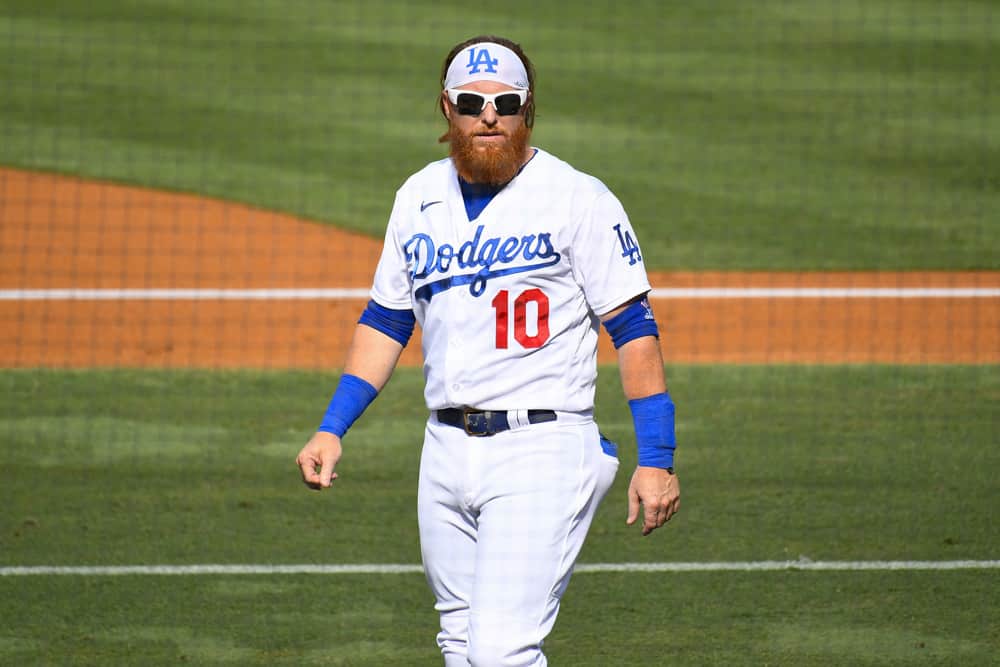 Hello my friends! The 2021 MLB season is creeping up on us, and *fingers crossed* we will have a full 162 game season. Although Opening Day isn’t until April 1st, some books are beginning to roll out 2021 MLB win totals. Join me as I preview each team and share my play on their win total.

You’re not going to find much easier money than betting on this win total. The defending World Series champions will be back and just as good this year. They handled their most important piece of business this offseason, and that was resigning Justin Turner. Joc Pederson was arguably their biggest loss in the offseason although he can be replaced. Their pitching rotation is one of the best in the MLB with Clayton Kershaw, Walker Buehler, Trevor Bauer, Julio Urias and David Price, with Dustin May available also. Lock this up because the Dodgers will top this with ease.

San Diego seems to be well-aware of just how good the Dodgers are this year. It’s been a great offseason for the Padres as they beefed up their pitching staff. They landed Blake Snell, Yu Darvish and Joe Musgrove in trades and the only players they had to give away of note was Zach Davies and Joey Lucchesi. They also picked up Mark Melancon as a closer, which is a good replacement for Trevor Rosenthal. Although their pitching staff is solid, their batting order is spotty at best. I can’t trust a pitching-reliant team to reach 95 wins so I’m leaning to the under.

Don’t look now Giants fans because there isn’t much pointing to any improvement this year. They did pick up a few pieces to the puzzle that they were missing. However, I don’t see enough talent on this team to be able to compete much. Their offense was somewhat of a surprise last year, and I have a hard time picturing them finishing seventh in runs scored per game again. I expect another bumpy season from San Francisco as their pitching staff is as questionable as their offense. I wouldn’t put a ton behind this because the number is about right, but I’m leaning to the under.

The 2020 shortened season wasn’t nice to Colorado, and this offseason continued that trend. They lost quite a few pieces of key offense, most importantly Nolan Arenado. They were able to bring in a nice load of future prospects in the trade of Arenado, but the only one who’s expected to be any sort of a factor is Austin Gomber. Apparently I’m not the only one super low on the Rockies as only the Pirates have a lower win total set. I believe oddsmakers got this one right as Colorado will be in the basement of the MLB this year, so I’m loading up on the under of their win total.

A late season run wasn’t enough to overcome a slow start to the 2020 season for Arizona. Now they’ve had an offseason where they didn’t really lose much and they picked up another solid piece of offense in Asdrubal Cabrera. I was high on this team last year, and although I had to eat my words I’m high on them once again this year. There’s a ton of young, good talent in this batting order and now there will be some chemistry between the team as well. I’m all over the Diamondbacks’ over, as 77 wins should be no problem given the talent on this team.

The Cubs have been one of the busiest teams this offseason, albeit they had to be. Although they did lose quite a few important pieces to the team, I believe they did a decent job of replacing them. However, there is still a ton of question marks on this team. It appears as though the Cubs are hoping for a resurgence in Jake Arrieta, who’s been spotty the past few seasons. Their batting order still has some pop in it, but it is also going to be top-heavy. That being said, I still believe the Cubs can piece together a .500 season and at least push this win total for us.

It was a tough offseason for St. Louis as they had some decisions to be made. However, they did re-sign their most important piece in Yadier Molina, which is a positive. The addition of Nolan Arenado via trade should help solidify the middle of their batting order which didn’t perform as expected last year. The Cardinals should be the team to benefit from a down year across the NL Central, and oddsmakers have listed them as small favorites to take the division pennant. I’m high on St. Louis this year, and I love the over on their win total as well.

It’s been an offseason to forget for Cincinnati. They lost their best pitcher in Trevor Bauer and didn’t do much to replace him either. They did add a few pieces to the puzzle that will certainly see their fair share of playing time though. However, this is a team whose losses greatly outweighs their additions. The Reds are currently projected to finish fourth in the NL Central, and I’m on board with oddsmakers on this one. There isn’t anything that gives me any sort of confidence that Cincinnati can top this win total, so I am on the under.

Milwaukee is another one of the teams that I have no feel on whatsoever this year. The loss of Eric Sogard isn’t terrible, but it isn’t great either. Ryan Braun hasn’t announced his retirement yet, but it also doesn’t appear as though he will play this year. The only addition they made of note this offseason was Kolten Wong, who figures to replace Sogard. I think oddsmakers got this total about right as I expect the Brew Crew to flirt with the .500 mark. Proceed with caution when betting this total, but I’m leaning towards the under for the Brewers.

The Pirates have made a name for themselves the past few years as a perennial bottom-dweller of the MLB. After their offseason, it appears as though they are on track for another poor season. Oddsmakers tend to agree with me as Pittsburgh has the lowest win total set amongst each of the 30 teams in the league. They lost a bunch of their pitching staff and traded away their best player in Josh Bell with little return. Their only addition of note this offseason was Brian Goodwin. Long story short, lock this up because there’s no way the Pirates top this total.

The 2020 season was very kind to the Braves, and they appear to be primed for another run. Cole Hamels was the only major loss for the team, and they replaced him nicely by bringing in Charlie Morton via free agency. Drew Smyly should fit into the starting rotation nicely and Carl Edwards Jr. is a trusty young guy for their bullpen. Atlanta hardly lost any firepower in their batting order, and they look to be ready to repeat their 2020 efforts, which placed them second in runs scored per game. I’m pounding this win total as I expect this number to rise before Opening Day.

Whatever magic that Miami was running on during their surprising 2020 campaign will most likely be gone this year. They lost a few important pieces to their pitching staff, which was the main driving force behind their success last year. Their batting order isn’t going to impress anyone on paper, and potentially won’t impress on the field either. It’s odd that the second place finisher in the NL East has the lowest win total of the division, but it’s with reason. I don’t expect the Marlins to win a ton of games and I’m on the under for them this season.

Philadelphia was one of the teams that disappointed me last season. They had a lot of talent in their batting order, but their pitching staff let them down time and time again. However, I thought they pieced together a decent offseason and at least filled their team’s needs. It’s going to be interesting to see how they respond to the new season, but I like what they feature on paper. Oddsmakers have their total set at two games above .500, and I do believe they will flirt with this number. I wouldn’t bet a ton on this, but for this article’s sake I will pick the over for the Phillies.

The Mets seem to be a cursed franchise. It doesn’t matter how much talent they have on their roster, they can’t seem to avoid the injury bug each year. However, this year they have something they haven’t had in a while and that is depth. This is a team which features arguably more talent than any other team in the league this year. I do expect them to give the Braves all they can handle in the division. However, their win total seems about right. I’m not going to bet a number that feels about right to me, but I am leaning towards the under until I see how they perform.

The Nationals are a team who fell from grace last year, although many expected this. However, this offseason points to a massive improvement for Washington. They picked up two sluggers in Josh Bell and Kyle Schwarber, and they picked up Jon Lester and Brad Hand to beef up their pitching staff. When I saw this win total, I was a little shocked. I have a hard time picturing the Nationals not topping this win total, and I believe they could even recapture some of their magic from their 2019 World Series run this year.