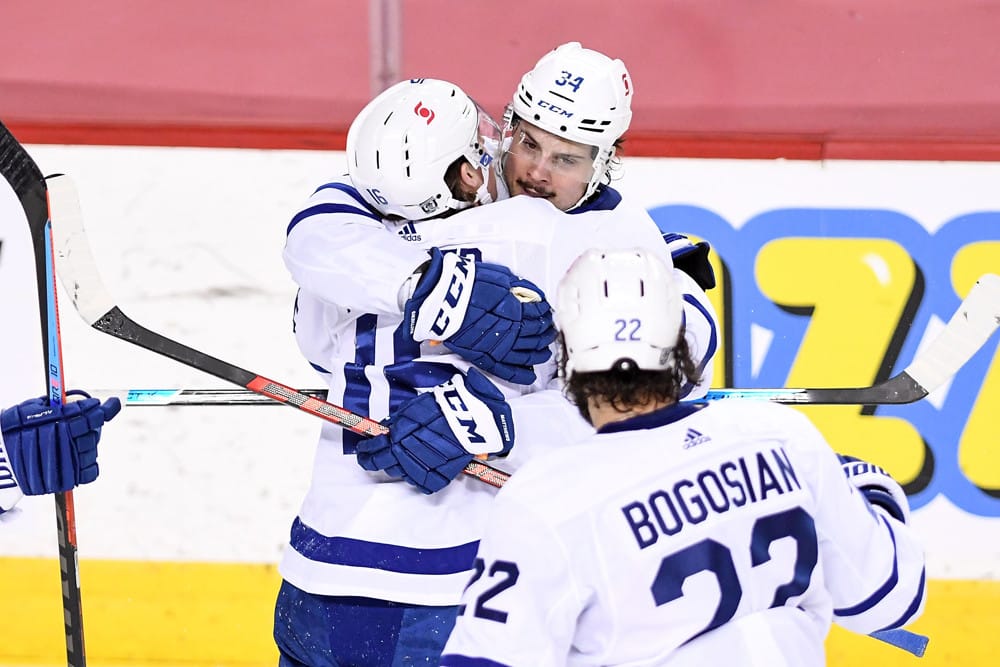 The Saturday slate of NHL games isn’t as busy as it could be due to COVID cancellations. However, there are still quite a few games worth looking at. In fact, four of the six games are featured in a DraftKings NHL Showdown.

I won’t dig too deep into each Showdown, but I’ll touch on a few players to target depending on the game. Some games have must-take players, some games have a variety of players to choose from, and everything in between.

If you have any questions, comments, or just want to talk some hockey, hit me up on Twitter @RGilbertSOP.

Toffoli is the most expensive skater on this slate. He has nine goals in 11 games this season, including five games with at least 15 fantasy points. Of those five games, Toffoli has 41 or more points in two of them.

Toffoli is coming off of just three fantasy points last game and hasn’t had single-digit fantasy points in back-to-back games since the second and third games of the season. Toffoli is worth paying up for if you’re trying to take down a contest.

Gallagher is the fourth-most expensive skater on the slate, but he has a decently high floor. He has 10.5 or more points in eight of 11 games this season, with a 6.0 fantasy point game in there as well. He has at least 11.8 points in three straight games and five of his last six games.

Gallagher’s ceiling may not be that high, however, as he has topped out at 24.8 fantasy points in a single game this season. And that came in the Canadiens’ fourth contest.

With most people looking to the Canadiens for their lineups, you could go against the grain and take one of these Senators.

Tkachuk will have his owners, but he shouldn’t get as much love as Toffoli, Gallagher, or possibly a few other Canadiens. Tkachuk is coming off of two bad games where he combined for just five shots on goal and zero points. He totaled 4.5 and 3.0 fantasy points in those games. However, Tkachuk has 10.5 or more fantasy points in seven of 11 games this season, with 28.5 fantasy points three games ago against the Oilers.

Chabot is down the card a bit in terms of salary, but he’s been up in terms of fantasy points recently. He has 9.3 or more fantasy points in five straight games and seven of 10 games this season. He doesn’t have a high ceiling as he topped out at 19.3 points last game, but he’ll give you some salary relief as a good contrarian option.

Perron has been completely hit or miss this season, so take at your own risk. He’s probably not great in a cash game, but get him in those GPP lineups.

O’Reilly is on a seven-game point streak and has points in eight of his last nine games. That has turned into fantasy points as well with at least 7.8 points in seven straight games, including 10.8 or more in five of them and 14.3 or more in two straight and three of six. He won’t light up the scoreboard, but he should give you a solid base to build around.

We’re going to change it up here from the high ceiling and floor format. There are two players that you simply must have in your lineup.

Unless you’re completely fading the Maple Leafs, Matthews has to be in your lineup.

And so does his linemate:

These are the two highest-priced skaters on this slate, but they’re worth it.

With the two top players, you’re going to need some value.

Simmonds was on a three-game goal streak before his last two games. He will give you a few shots on goal and has a chance of finding the back of the net on Toronto’s second line with John Tavares and William Nylander, who aren’t bad picks in their own right if you want to correlate them with Simmonds. He’s also on the top power-play unit.

Like the Maple Leafs, the Oilers have two players that you have to have in your lineups. I think you know who I’m talking about. Connor McDavid and Leon Drasiaitl are machines. Take them. I’m not going to waste time writing about them. Let’s just get to some contrarian picks and value.

Simon hasn’t done anything this season, so this is purely an opportunity play. He is slated to play on the Flames’ second line with Johnny Gaudreau and Sean Monahan. Maybe he’ll crash the net and pick up a goal or assist. For $2,800, it’s worth the chance, especially to get the Oilers’ big guns in your lineup.

If you are one of those people that doubt McDavid and Draisaitl, you could take this guy.

Markstrom has the ability to stand on his head and frustrate opponents. If McDavid and Draisaitl aren’t scoring, the Oilers aren’t scoring. Markstrom already has two shutouts this season against the Canucks and Canadiens.