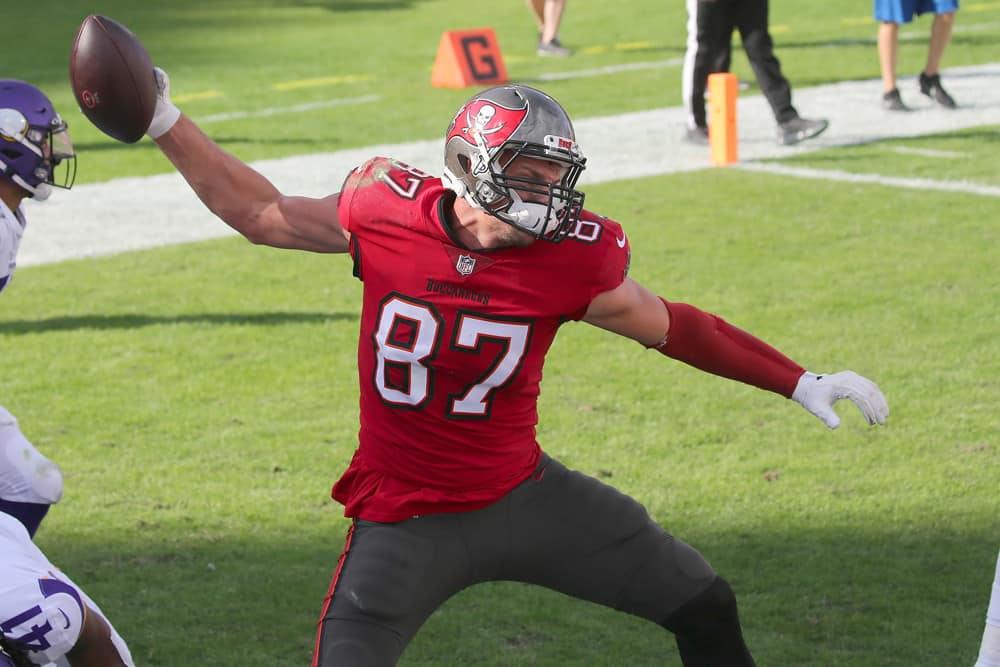 The build-up is almost over and it’s just about time to crown an NFL Champion and for your last chance to play NFL DFS in the Super Bowl DraftKings Showdown. Fans are in for a Week 12 rematch between the defending Super Bowl champs the Kansas City Chiefs and Tom Brady along with his Tampa Bay Buccaneers. In the regular-season version of this matchup, the Chiefs bested the Bucs in a heated 27-24 contest, the game started out lopsided but ended up being much closer, definitely worth tracking live odds for Super Bowl 55.

Luckily, the showdown between the old school and the new kid lived up the billing. Patrick Mahomes exploded for 462 yards and three touchdowns. Brady threw three touchdowns himself along with 345 of his own yards. Tyreek Hill was the star of the show though as he had quite the day. Hill accounted for all of the Mahomes touchdowns en route to a 13 catch, 269-yard day. Needless to say, given the high stakes of this game, we are in for another exciting ride.

Such is the setup for what should be a fantasy packed day. With lots of points on the line and expensive players on the slate, identifying cheap production will be key. These four players should help you afford the otherworldly price of a Kansas City stack, or a Brady/Evans/Godwin combo.

This was not the breakout season that was anticipated for Mecole Hardman. That said, the year was not a total loss. Hardman proved that he has the potential to be every bit a star as some of his teammates already are. He turned in five double-digit fantasy point days over the course of the regular season. That is an impressive feat considering he shares the field with two of the most targeted offensive weapons in the league.

Where this play gets more attractive is two-fold. First, he’ll have the opportunity to take the field without fellow supporting receiver Demarcus Robinson. Robinson finds himself having to sit out the Super Bowl due to Covid. That alone puts Hardman in an advantageous situation in that he will not have to share looks with Robinson.

Secondly, he seems to have hit a lucrative stride at just the right time. In both Kansas City playoff games, Hardman has hit the double-digit mark. He caught four passes for 58 yards against the Browns adding a four-yard carry to round out his 10.2 point total. Last week, he found a way to shake off a rough start on his way to a 12.4 point day. Much of that came off a single 50-yard run, but that only goes to prove his explosive potential. At the very least, he’ll make for an intriguing Chief to offset a full Tampa stack.

What better game to make a return from injury than the biggest of them all? Sammy Watkins will look to take the field for the first time since Week 16 when he suits up in Tampa. It’s true that his regular-season stats were not what he’d hoped to achieve. But, the fact of the matter is that for this game, players tend to forget all that preceded it. It’s highly possible that his absence could work against him. Although, it is more likely this game will turn into a high-flying affair and Watkins stands to benefit.

A good place to draw inspiration for this play is Watkins’ play in last year’s Super Bowl. He was a bright spot in the Kansas City passing attack against the 49ers. His five catches for 98 yards trailed only Travis Kelce who finished with 105 yards. Despite being held in check by Tampa in their regular-season meeting, look for Watkins to bounce back. Also worth noting, Kansas City will be without Demarcus Robinson which could spread a couple more targets Watkins’ way. He says he feels great and ready to roll on Sunday. If that’s true, look for him to inherit a decent chunk of work and the potential to deliver good value from the flex. He’ll be a great risk to take in your Super Bowl DraftKings Showdown lineup.

You can toss the regular season stats right out the window here. Anything Gronk has or has not done before Super Bowl Sunday is rendered irrelevant. There is just something about this game that elevates his already stratospheric game. His 23 receptions are the record for the most at his position in the NFL finale. Add to that the 237 receiving yards that also tops the list for the most by a tight end in the history of the Super Bowl. It also doesn’t hurt that he and his quarterback have crushed historic stat lines their entire time together.

There is almost zero doubt that under the bright home lights, Brady will do all he can to extend his buddy’s lead in those categories. You have to believe that Gronkowski somehow knew that he’d be here again when he signed with the Bucs. Now that it has come to pass, you will see the Gronk of old. He’ll pop up for this game faster than a whack a mole and dominate on a stage on which he is the most comfortable. Having exposure to him as a flex play is wise. You should also float a couple of lineups with him in the captain’s slot. His upside puts a Mahomes/Kelce stack easily in play.

The fact that Ronald Jones has fallen off a cliff the last two weeks will have everyone flocking to Leonard Fournette. But in Jones lies an opportunity to zig when everyone else will zag. What most are failing to acknowledge is that in his 14 regular-season appearances, he reached double-digit production in 10 of them. In fact, he had three 20+ point fantasy days and a total of six over 15 points. Short term trend-watchers will want to count him out after two lackluster outings in the playoffs. He hit a brick wall against the Packers last week and could not find his way into the endzone against the Saints holding him to single-digit games in both.

Hope here rests in Jones being able to replicate his numbers from the Buccaneer’s matchup against the Chiefs in Week 12. In that game, he was able to cash in for just over 17 fantasy points. He carried the ball nine times for 66 yards while adding a 37-yard touchdown catch to his total. If Tampa hopes to keep pace with the Chiefs, they will have to get all their weapons involved. Jones carried them through a better part of the season. It would be horrible if Bruce Arians tossed him to the side in their most important game in years. Expect Jones to enjoy a bounce-back game at just the right time for you to cash in on it. Plus, at his extremely low price, you can literally stack the roster everywhere else. This Super Bowl DraftKings Showdown pick could just be the difference-maker in your GPP lineups.