Making his debut at the Waste Management Phoenix Open is the biggest name in the field. Rory McIlroy makes his first trip to TPC Scottsdale in his storied career. Rory is coming off two solid starts to his 2021 campaign and hopes to win the tournament in his first start.

Another big name in the field is Jon Rahm, who is the local favorite with the fans. Rahm attended Arizona State and parlays his popularity with terrific play at the event. Rahm has never finished worse than 16th at TPC Scottsdale. He also finished 5th as an amateur in 2015. Rahm looks to win for the first time at TPC Scottsdale.

The property of TPC Scottsdale holds two golf courses, both of which were co-designed by Tom Weiskopf and Jay Morrish. The commissioner of the PGA Tour in 1986 directed the two architects to build another golf resort for the TPC network that had the look and feel of TPC Sawgrass. Out of this endeavor gave rise to the Champions Course and the Stadium Course. The Stadium Course will host the tournament all four rounds. This is a relief for gamblers who were tormented by multi-course formats the previous two weeks.

TPC Scottsdale is likely on the bucket list for more mainstream golf fans based solely on the insanity of the 16th hole alone. But the dirty little secret about TPC Scottsdale is, for the most part, it’s a bland, mediocre, cookie cutter golf course. This is typically a stigma of most TPC golf courses.

There’s very little that piques my interest about TPC Scottsdale over the first fourteen holes. It suffers from a lot of the pitfalls that the South Course at Torrey Pines did last week. There are lots of similar looking Par 4’s. Almost all of them play straight ahead with a bunker near the fairway landing zone.

There’s not many decisions to make off the tee. Everything is very much out in front of the player. Unlike the South Course at Torrey Pines, though, most guys should be able to get good contact on the golf ball if they find the rough. The rough at TPC Scottsdale is only 2.25″ thick. But like the South Course, the golf course is a straight forward game of execution.

From the tee box, the golfers will begin to hear the madness reverberating from the grandstands of the 16th. They’ll need to tune out the noise and hit a solid tee shot. With water all down the left, it’s an intimidating visual. It’s also very important to card a birdie here if one wants to win the tournament. Rickie Fowler birdied it in the final round on his way to overtaking Branden Grace for the victory. Gary Woodland carded a birdie on the 15th in three out of four rounds on his way to win the tournament in 2018. Hideki Matsuyama birdied it six out of eight tries on his way to winning back to back in 2016 and 2017. And Brooks Koepka eagled this hole in the final round of the 2015 event to help him capture his first career win on the PGA Tour.

After that is the infamous Par 3 16th. For 361 days of the year, its a very non-descript hole. On its own, the hole is quite a stress-less endeavor. It plays as little as 115 yards and as much as 160 into a simple two-tiered green. Its defense are four greenside bunkers to present the only challenge.

But when you surround the hole with a giant frat party attended by 20,000 drunks who’ll boo if you miss the green, it makes the tee shot a whole lot more nerve-wracking. 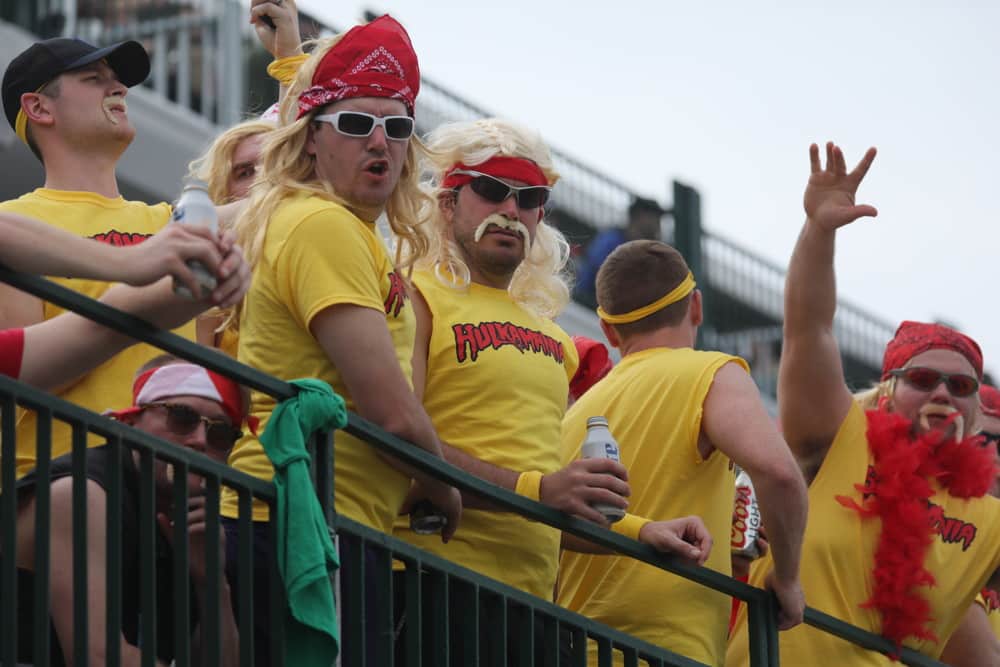 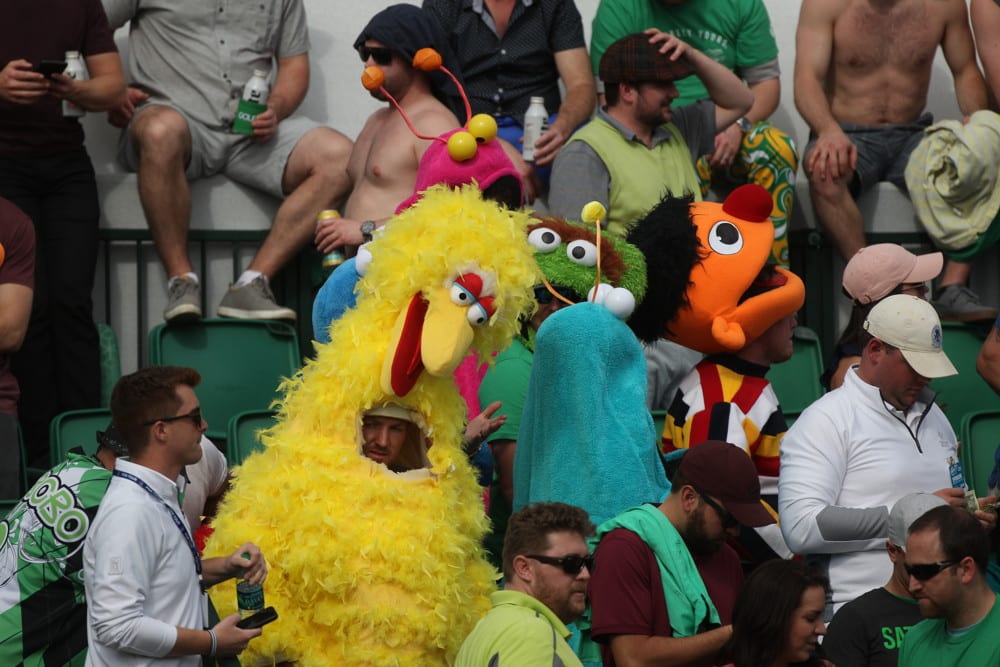 If you’re reading this article, you already know exactly what the 16th offers. So instead of regurgitating the same cliches and jokes about the 16th that everyone will make, here’s a video from the guys at No Laying Up that accurately sums up the vibe:

Due to COVID restrictions, only 5,000 fans will be in the stands at the 16th this week. That’s at about 25% normal capacity. But even with the limited spectators, their presence will give this tournament plenty of energy.

For those who’d rather go watch golf instead of take funnels of Miller Light from sunup to sundown, the place to be is the Par 4 17th. This is the best and most exciting hole on the golf course. It’s a high risk, high reward hole where tournaments are won and lost.

Pros have two options when they step to the tee at the downhill 332 yard 17th. They can either layup down the rightside of the fairway, past the centerline bunker and set up an easy approach into the large green. That’ll ensure at worst walking off the green with a par. It’ll also earn a few boos from those waking up from their early afternoon alcohol coma.

Or they could pull out a three-wood or driver and attempt to drive the green. The reward is very big. Those who successfully drive the green have a great opportunity at carding an eagle or two putting for birdie. It’s also the site of the only hole in one on a Par 4 in PGA Tour history:

There’s downsides to both strategies. Those who lay up run the risk of walking away without a birdie. The hole annually plays under par, so it’s crucial to card a birdie so you don’t lose strokes to the field. Pros would rather two putt for birdie instead of trying to get up and down for one from off the green. In 2020, Tony Finau choose to lay up on 17 while leading in the final round. He unfortunately found the centerline bunker short of the green. Finau was unable to get up and down for birdie, which allowed Webb Simpson back into the tournament. He would later go on to lose to Simpson in the playoff.

There’s much more downside to going for the green, though. Water awaits those who miss left of the fairway. Branden Grace ended his chances to win in 2019 by sending his tee shot left into the drink. There’s also water behind the green. Anyone who overcooks their tee shot runs the risk of running through the green and into the drink. Poor Rickie Fowler did just that in 2016 while leading the tournament. He would later lose to Hideki Matsuyama in a playoff.

The tournament wraps up at the 442 yard 18th. It’s a dog-legged left Par 4 with water down the left side. This is a very common template for a finishing hole at TPC golf courses:

To the right are a trilogy of fairway bunkers in the landing zones for everyone. To the left is a row of church pew bunkers that probably aren’t in play for anyone. It would take a very aggressive line to play a fade over the water towards the left side of the fairway to even reach it. They’re mostly just there as eye-candy. Still, with all the challenges presented off the tee it sets up drama should the tournament still not be decided down the stretch.

Despite an overabundance of fairway and water hazards, TPC Scottsdale isn’t a tremendously difficult golf course. The winning score typically is in the mid to high teens with a cut line around Even or -1. Scoring can get a little tough if Scottsdale sees some cooler temperatures, rain or wind. The last two years saw tough final round scoring conditions. Rain and cold made things a tough go for the contenders in 2019. Wind swept the golf course in 2020 and made the greens play very firm.

This year’s tournament looks to be shaping up like last year’s. Comfortable temperatures and brilliant sunshine will bathe the golf course the first three days. Winds will also be quite calm. On Sunday, however, winds are forecast to gust up to 25 MPH. That should help the golf course play quite firm and make greens less receptive.

Generally speaking, players who hit it long and straight have an advantage at TPC Scottsdale. The pitfalls at the golf course are very evident to the player from each tee box, but a lot of trouble can be bombed over by a longer player. A long player may also hit a more accurate three wood to make sure they avoid any bunkers they can’t hit over. Their club head speed puts them in Position A without sacrificing too much distance to the field.

That doesn’t mean a shorter, more accurate player is behind the eight ball like they were at Torrey Pines South last week. There’s still a premium for hitting fairways at the golf course. The golf course has wider corridors than Torrey Pines did last week. The field average on driving accuracy at TPC Scottsdale is about the same as the PGA Tour average. Missing fairways brings a bit of a penalty to the players this week. Shorter hitters, like Webb Simpson, have found success at the golf course with a tremendous display of accuracy off the tee. He then parlayed this by taking advantage of playing from the fairway with his all-world iron play.

That’s one of the reasons why both driving distance and accuracy are prevalent among those towards the top of the leaderboard: 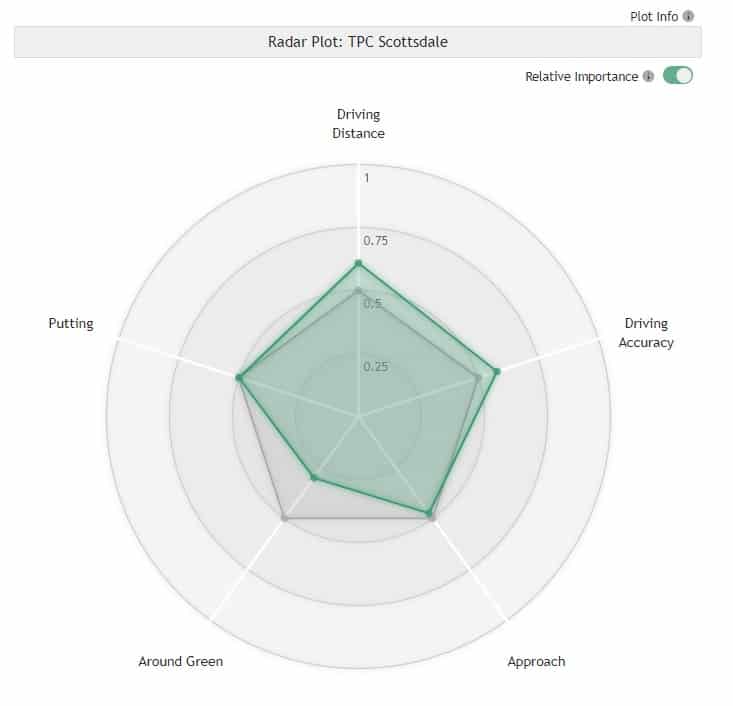 Solid ball strikers find a ton of success at TPC Scottsdale, no matter how they do it. Bombers can sacrifice fairway accuracy with the ability to bomb past the hazards and have a wedge out of the overseeded rough. They’ll just have to make sure on holes where they can’t hit over the bunkers to club down. Short hitters have plenty of room off the tee to set up a mid-iron into large greens. Their strengths with the irons also will come in handy should the greens play firm like they did last year.

These formulas for success are further demonstrated for those who have the most success at the tournament. Here’s a list of players in the field who have gained over a stroke per round at TPC Scottsdale (minimum of 12 rounds):

This list comprises a wide variety of players. It’s a mix full of bombers, short tacticians and all around good players. The common link is that they’re very efficient tee-to-green and are overall very solid ball strikers. Sticking to this simple formula for your player targets should pay dividends.

The last angle to consider in our Waste Management Phoenix Open gambling guide is the grass type. Many people make the mistake of assuming this is a Bermudagrass golf course. Like the American Express, the golf course is overseeded during the winter months. The golf course was overseeded in the fall and will remain this way until at least May. Over the top of dead, dormant Bermudagrass is a lush layer of emerald green Bentgrass. The greens are overseeded with a mixture of both Bentgrass and Poa.

For those who like consulting putting performance by grass types, the tournaments to target are those with Bent/Poa mixtures. It includes the following tournaments:

Make sure to listen to: