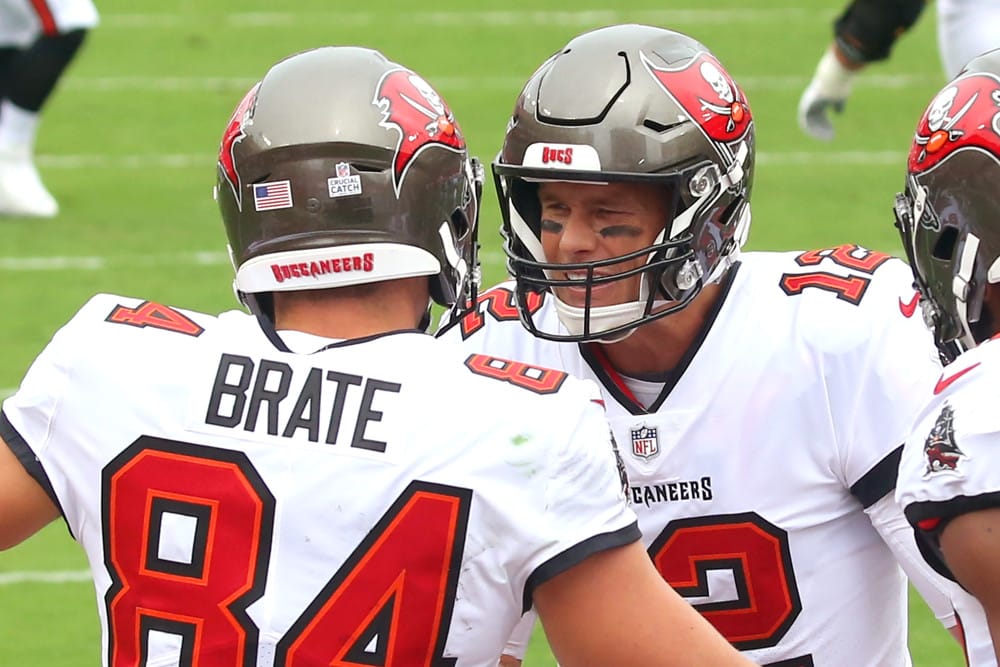 The Super Bowl dance card will be filled this Sunday along with the chance to fill your pockets with your NFL Conference Championship DFS Picks. Four teams are left, only two will play for the Lombardi trophy. This week’s slate features some serious firepower and the potential for some astronomical fantasy point production. With that in mind, as you construct your roster here are things to keep in mind.

A Packers stack with Aaron Rodgers, Aaron Jones, and Davante Adams in the captain’s spot will leave you with only $3,866 left per player to spend. Putting Jones in the captain spot will bump you up to $4,166 left per player. If you choose to stack Tom Brady as the captain with Mike Evans and Leonard Fournette rounding it out, you’ll be left with $5,566 per player to fill the last three spots. What does this tell you? That the top stacks will be quite expensive and you will need to find upside down the list. The players below can help you fill those spots at the price points you’ll need to fill them.

At this point in the season, most players wear the questionable tag by their name almost as if it was the number on their jersey. For Ronald Jones, his comes by way of injuries he’s fought through to play these last few weeks. Last week, he muscled through a quadriceps aggravation on his way to a 13-carry, 62-yard game against the Saints. Currently, he is battling issues with his finger and his calf. So far, none of these has kept him from taking the field. It should be no different this week against the team Jones enjoyed his best outing against this season.

In week 6, Jones carried the ball 23 times for 113 yards and two touchdowns. He also caught both of his targets for another eight yards. All told, he walked away from the Packers with 29.1 fantasy points. On the other hand, he was not sharing work with Fournette in that game. His backfield counterpart was out with an ankle injury that week. Even still, at his price you can lock the Tampa Bay running game with cap room left over to get creative with the rest of your NFL Conference Championship DFS roster.

There is no actual logical explanation for the sudden production from Cameron Brate. In Tampa’s two playoff games, he’s caught eight of his 11 targets for 130 yards. In the 16 games of the regular season, he gained a total of 282 yards on 34 targets. As a matter of fact, Brady is remembering how much he loves his tight ends. Only this time, it’s not Gronk getting all the love. Coming into a game where both star wideouts are dinged up, Brady may ask Brate to pick up some of the slack.

The @Buccaneers are on the board!@TomBrady connects with Cameron Brate and we’re tied 7-7. #GoBucs

It has been somewhat tough sledding for tight ends against the Packers this season. That said, it was actually Gronk who posted the single biggest outing against them when these teams met in the regular season. He caught five passes for 78 yards and a touchdown in the Buc’s 38-10 week 6 victory. It could be argued that Brady’s old pal makes for a better play given that success. The counter is that he has been non-existent the past three weeks while Brate has been heating up. You aren’t asking him to do much heavy lifting for your lineup, so getting a solid double-digit point day from him will make him worth the roster spot.

Speaking of double-digit fantasy performances, Ryan Succop is there to make your Packers stack work. Over the last three weeks, he’s posted consecutive games of at least 12 fantasy points. In week 6 against the Packers, he came through with an even 10 point day. All the same, he will be busy no matter how this game shakes out. The Packers could tighten up like they did against the Bears and force Succop to attempt field goals. Or, he will connect on a couple of field goals on the day, and fill the rest of his total with extra points. Either way, he’s all but assured to at least double his salary, if not triple if he can find his way to a 40 or 50 yarder. Slide him into your NFL Conference Championship DFS lineups for that extra salary cushion.

Both Williams and A.J. Dillon are limited participants in practice this week so keep an eye on this situation. But, should Williams be cleared to play, he will make for an intriguing value play. Last week he garnered a fair share of the workload behind Aaron Jones after Dillon was knocked out of the game. All told, Williams carried the ball 12 times to Jones’ 14. With his carries, Williams gained an impressive 65 yards against a tough Rams rushing defense.

In order to get close to this again, he’ll need to summon that same drive this week as he and the Packers will be facing the toughest rushing defense in the league. Although, what he could have on his side is a Green Bay lead early enough to give him some work. He’s proven he is capable of big games even with Jones on the field. He posted an 18.5 point day against the Falcons even with Jones earning 22 of his own. Nevertheless, he does not require much to return his investment for this NFL Conference Championship DFS slate. His salary and his upside open up a ton of options including rostering both quarterbacks.