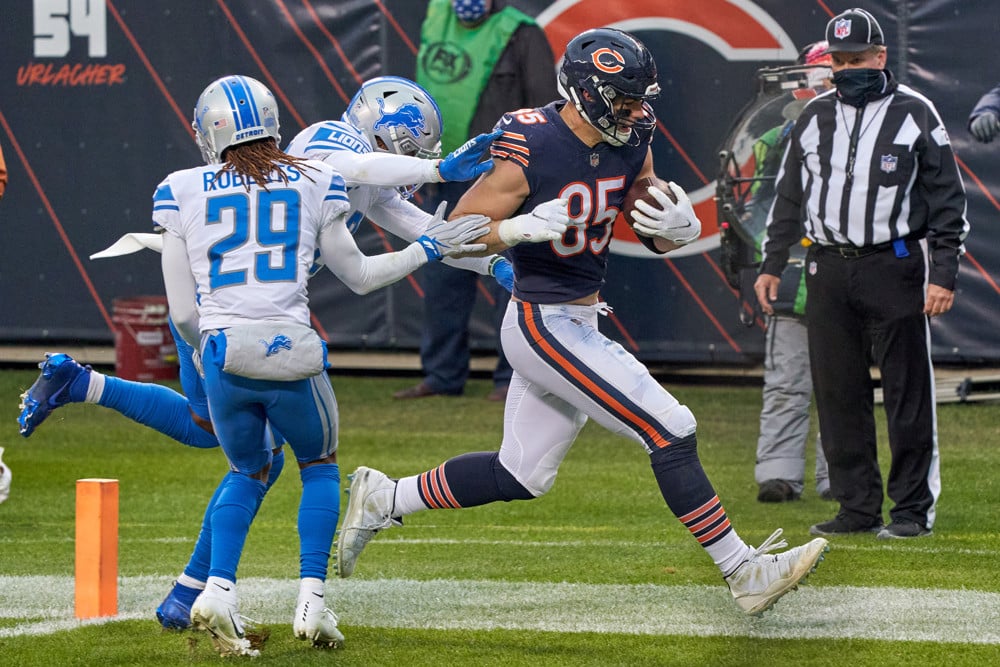 Hopefully you had a lucrative Saturday playing the DraftKings Super Wild Card Showdown slates. If you did, that should make you more anxious to jump into Sunday’s contests. If you didn’t, Sunday’s offerings could help get you back into the profit zone. Like I’ve done all season, I will make a case for certain players to use in your lineups. Like you’ve done all season, you can digest this information and use it as you see fit. Our time together is winding down, but the competition is still as intense as it was in week 1. Let’s have some fun and hopefully win a little money along the way.

As always, the players below are not meant to be considered “core.” These are simply players to consider as you are building your lineups. Play one, play them all, it is entirely up to you. My job is to help you see the reasoning behind selecting these players and how they can help you win. We wish you luck on your DraftKings Super Wild Card Showdown Sunday Picks.

The pricing on this slate almost forces you to roster a defense of a kicker, maybe even both. Of the two, you should bank on the one that can’t end the day with negative points. In choosing between those available in this contest, Tucker is the most reliable play. Over the regular season, he has only had four games below nine points. He’s scored at least that in four out of his last five games.

When he last met Tennessee in week 11, Tucker connected on all three of his field goal attempts and an extra point. The contest ended in a 30-24 victory for the Titans. This game has the potential of playing out in much the same fashion. For him to triple his value, he would only need one more field goal than his last game against Tennessee. Even better if he’s able to hit on one or two long-range attempts. Either way, he’s one of the safer low salary plays of the day and an excellent filler for your DraftKings Super Wild Card Showdown roster.

Keep an eye on the practice reports on this one. Willie Snead has been limited in practice this week. If he doesn’t play, this lifts Bryant into a fantasy-relevant role on Sunday. The chiseled vet has thrown up the “X” in two out of his last three games. Granted, it was his only catch in both of those games, but he scored nonetheless.

@DezBryant is back in the endzone!

Tune in on FOX! pic.twitter.com/UD9zT49tU0

Last week he did not even get a single look even with Snead out of the game. To be fair, the Ravens had little need for Lamar Jackson to throw the ball as they tore apart Cincinnati on the ground. That will not be as easy to do against the Titans. They are one of the 10 best in the league against opposing running backs. Jackson will have to lean a bit more on his pass-catchers this week. Maybe playoff Dez will have a little more in his tank this time around against the Titans. He caught four of five targets for 28 yards in his triumphant return to football in week 11. Again, salary relief will be a real issue this week, Byant’s upside makes for a good gamble in a tournament lineup.

It’s almost a certainty that Alvin Kamara will play on Sunday if he is available. Both he and Murray missed the last game of the season due to Covid. Of the two, Murray was activated on Wednesday. Kamara is expected to be cleared just before the game. If between now and Sunday, Kamara suffers a setback, Murray’s stock spikes considerably. Even with Kamara on the field, Murray still has value. They have proven time after time that both can have fantasy relevancy in the same game.

Nothing proved that point more than in week 16 where Kamara teed off against the Vikings. Despite the 155 yards, the six touchdowns, and three catches from his teammate, Murray still managed a double-digit day himself. His 12 carries for 72 yards along with his three grabs for 24 yards cashed in 12.6 points. Chicago ended the regular season in the middle of the pack against the run game. There is a pathway here for Murray to return value on his incredibly low price here. He will make a fine addition to your DraftKings Super Wild Card Showdown Picks.

Kmet truthers rejoice! Your anointed tight end has a chance to prove to a national audience what you have known all season. Kmet is a valuable offensive weapon. He’ll certainly have his work cut out for him. New Orleans is a top 5 passing defense. They have also done well against tight ends for a better part of the season. But, two weeks ago they allowed Irv Smith of the Vikings to find the endzone twice on six catches. The week before that they were attacked by Travis Kelce. You can point to the -1 points they laid on the Panthers’ tight end position last week. If you did, you’d only be knocking Ian Thomas who has only 20 receptions all season.

There’s good news for you should you choose to take a chance on Kmet. He has seen at least six targets in four of his last five outings. He’s outpaced his counterpart Jimmy Graham in each of those games as well. This signals an attempt to make Kmet the leading man at the position. His value could benefit should Darnell Mooney miss this game. Mooney was not practicing on Wednesday with an ankle injury. Kmet is in a good position, either way, so feel free to load him into your lineup.

Very quickly Higgins has become one of the more trusted targets for Baker Mayfield. Since the beginning of December, he has been targeted 27 times. He’s managed to accumulate 294 yards and two touchdowns with his 18 receptions. Once OBJ departed Cleveland, Higgins became the number two guy behind Landry. So far, it has worked in his favor and he’ll look to take his success into the playoffs.

He will face a tough Pittsburgh pass defense that over the last three weeks, has only allowed an average of 160 passing yards. It might be hard to look past his three catches for 68 yards in two games against the Steelers. But, he did find the endzone in one, so there is hope that he can do it again. Also, last week, he did manage to gain 55 yards on two catches last week against Pittsburgh. The odds are he will manage a better outing riding a little momentum. He has a lower floor than you might be comfortable with, but should he and Mayfield hit a stride early, you could enjoy a big day at a low cost.

Hooper is very much a touchdown-dependent dart throw. The upside here is that last week, he managed to cash that throw. He caught four of his five targets for 37 yards and the score. Most of the season he hasn’t offered much standalone value, even getting points per receptions. But, he managed to break through with a tidy seven-catch for a 71-yard outing against the Jets two weeks ago. In that matchup, Mayfield looked his way 15 times.

Hooper has scored in three of his last five games, so there is a bit of momentum building in the former Falcon. Not to mention his playoff experience might be something he and his quarterback rally around. This puts him in a great position to return on his value.