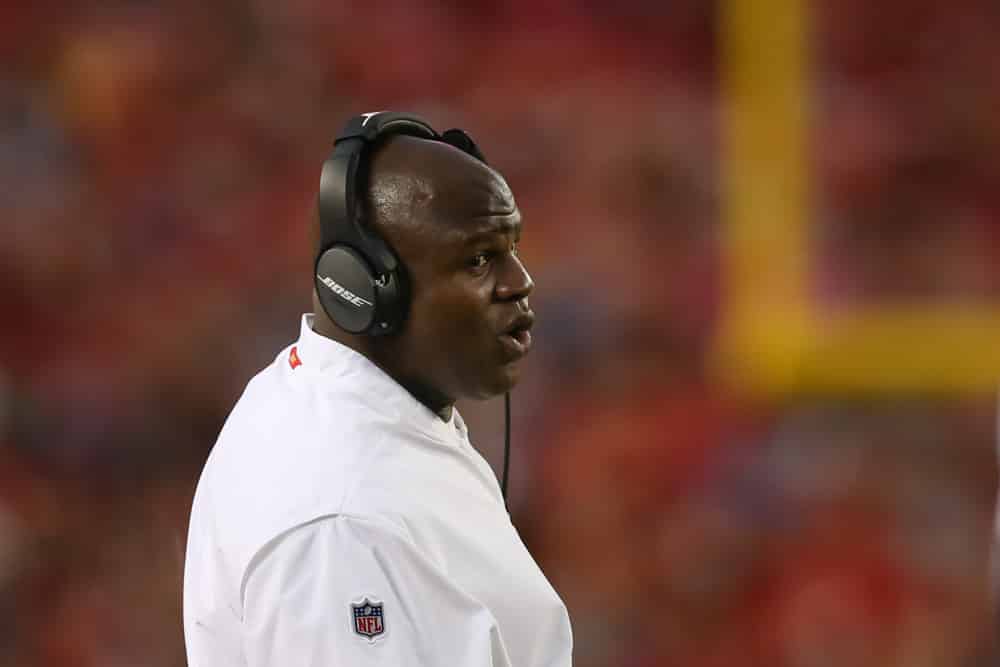 Eric Bieniemy is the hot name, but who else has a shot in the NFL Coaching Hire Odds?

The NFL regular season has ended and Black Monday has passed. As the dust settles there are six openings to be filled and many candidates are still coaching in the playoffs and cannot be interviewed yet. However, the next few days will be fun as hell for wild speculation and may lead to some great opportunities to cash in bets. Odds are jumping on and off of all the books right now, but here are some of the better NFL Coaching Hire Odds out there that have been seen. Also, do not be surprised if at least one more coach is fired in the coming days.

Eric Bieniemy +175 to be Texans Coach

If you are a head coach, you always want to work with the best talent. For a man who spent the past few years working with Patrick Mahomes, stepping into a role with anyone less will be a letdown. Deshaun Watson is the closest any of the available coaches will get to working with Patrick Mahomes in this hiring cycle. With the sheen of a Cheifs’ Super Bowl championship still on his resume, Eric Bieniemy is the odds-on favorite to have his pick of jobs and the Texans are most likely to be his choice.

Sure, the Texans have some roster-construction issues and lack draft capital for the short term. However, an all-world quarterback like Watson can cover a lot of glaring issues. This year Watson quietly led the NFL in passing yards, despite losing DeAndre Hopkins. The Texans have some pieces and although they have some large contracts on the books for 2021, upon closer inspection they are easily cuttable contracts. Duke Johnson, David Johnson, Brandin Cooks, JJ Watt, and Benardrick McKinney can all be cut this offseason for next to no dead cap penalty. Moving on from those players opens up nearly $50 million in cap space for 2021. Plenty of space to start rebuilding. So long as the Texans have Watson, Bieniemy is a great coaching choice who can help Watson take his next steps into superstardom.

Arthur Smith +1400 to be Falcons Coach

Sure, these are some long odds. However, when considering how to bet NFL Coaching Odds, think about the guy that the team just fired. Much like when you jump out of one relationship, your next relationship often will be the opposite of your previous one. The Falcons spent the last few years running with defensive “guru” Dan Quinn. It makes sense that they would aim more towards an offensive-minded coach. That opens the door for Titans offensive coordinator Arthur Smith. 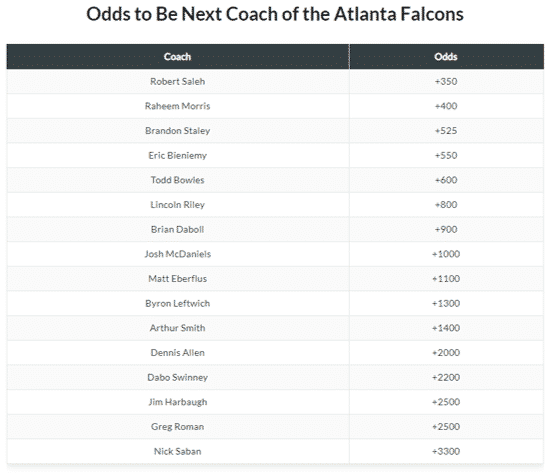 Eric Bienemy may be the hot ticket right now, but he will have his pick of jobs and the Falcons’ job is not all that attractive. The Falcons are capped out for 2021 and have an aging roster. Smith is the third-best offensive option behind Bienemy and Brian Daboll. It is also not likely that Lincoln Riley or Josh McDaniels would leave their present jobs. Smith is a capable offensive coordinator, but he is young and has only been a coordinator for two years. In those two years, his unit has been an above-average offense in points and yards, and dominant on the ground. In Atlanta Smith would have to adapt to a pass-heavy roster. He has experience in the passing game so he may be the best option for the Falcons.

Brian Daboll +275 to be Chargers Coach

Brian Daboll has been an absolute revelation in mentoring Josh Allen to the MVP-level candidate. From the start of his tenure in Buffalo to this year, Daboll has transformed the Bills from an anemic and run-heavy offense into a pass-happy bombs-away offense. He has been largely responsible for the evolution of Josh Allen and the Chargers have a young quarterback they hope will surpass Allen. With a lot of offensive pieces in place and a strong defense, Daboll could be the guy to take the Chargers to the playoffs. 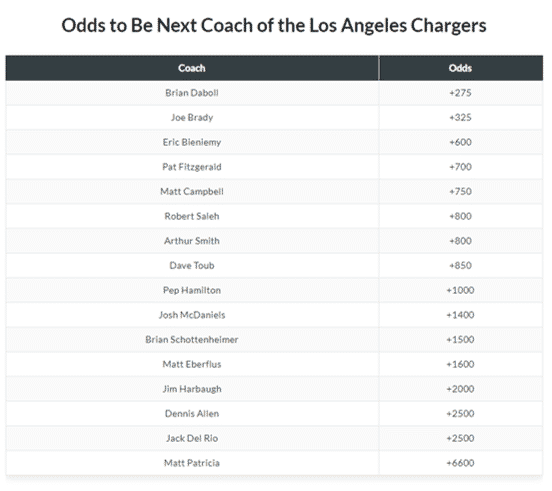 Sure, this hire appears to run contrary to the idea of going against your previous head coach. However, Daboll is not the same kind of coach as Lynn. Daboll could bring an offensive explosion and winning experience to the Chargers. Add in his connection to the general manager Tom Telesco and this seems like a lock.

Pep Hamilton +1000 to be Chargers Coach

Yes, I just said Daboll bet is good for the NFL Coaching Odds. However, Daboll is a hot commodity and might decide to take another job. If the Chargers miss out on Daboll, they may consider sticking with a known commodity with head coaching experience. Pep Hamilton has been a coach at about every level and a head coach in the XFL. Additionally, he has been the offensive coordinator during an up-and-down period for Indianapolis.

The Detroit Lions are broken from a cultural standpoint. Matt Patricia spent his tenure tearing down Jim Caldwell’s carefully crafted culture. The Lions should be looking for an established coach who has proven they can build a culture and succeed. Marvin Lewis spent the better part of a decade building a perennial playoff contender in Cincinnati. After the last two years of Patricia turning the storied franchise into a laughingstock, the stability of Lewis is a great choice. 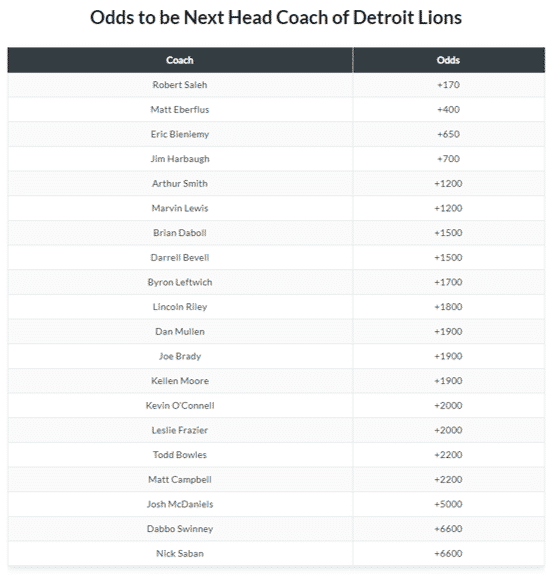 Looking at the Lions, they have some talent on offense and a small amount of cap space, but they can get some relief by moving on from Matt Stafford and even more relief by releasing some overpaid players in 2022. Lewis is a hire you make if you are willing to be patient. The Lions are also in the process of hiring a general manager so that may be a telling move when they hire that position. They made wholesale changes in their leadership and bringing in Lewis is a move towards long-term stability.