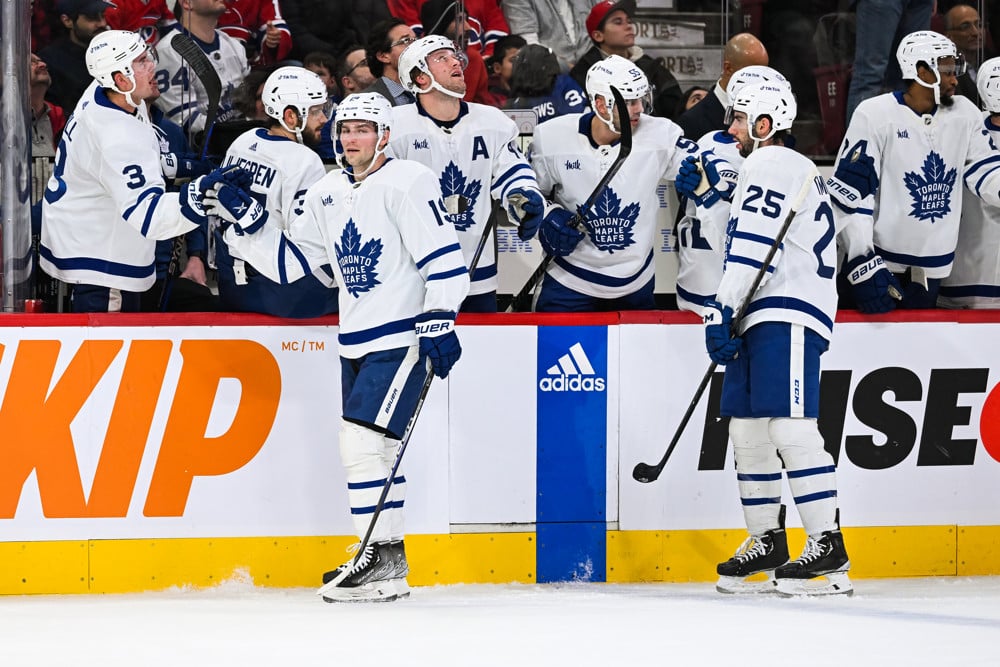 The NHL is back to a relatively normal schedule this week and that means yet another fantasy hockey waiver wire article with teams to stream and best pickups off of waivers for week 16! The heavier slates are on Tuesday (11 games), Thursday (9), and Saturday (11), leaving the typical Monday (4), Wednesday (5), Friday (8), and Sunday (2) as the lighter slates. Filling your lineup on those lighter nights will help you get an edge on your opponent.

The Toronto Maple Leafs are buzzing and they’re the only team to play on all four light nights this week — which is a rare occurrence. The Columbus Blue Jackets and New York Islanders also play four times this week, including thrice on those lighter nights. Those are the three teams we’ll be keying in on here.

The Maple Leafs’ stars — Auston Matthews, Mitch Marner, William Nylander, John Tavares, and Morgan Reilly — are all rostered in over 90% of leagues. Hell, even Michael Bunting is only available in a third of Yahoo! leagues — pick him up if he’s available in yours. We’ll have to dig deep to find some viable options here.

Jarnkrok currently plays decent minutes in all situations for the Leafs. He’s on the second line with Tavares and Marner as well as the second power-play unit and he gets time on the penalty kill. The veteran forward won’t light the scoreboard on fire — his career high is 35 points — but he does have 22 points (10 G, 12 A) in 40 games this season, including 16 points in his last 19 games.

Jarnkrok should be able to give you a few points this week given his schedule and usage.

This one is a stretch. Engvall plays on the second power-play unit with Bunting and Jarnkrok, so he might pick up a point here or there. However, he only has 17 points in 45 games this season after putting up 35 points in 78 games last year.

Giordano is on a bit of a hot streak with points in three straight games. The veteran defenseman plays on the second pair and top penalty kill unit. He’ll pick up some shots and blocks, and hopefully, he can keep up his hot stretch as the Leafs head into a homestand.

Johnny Gaudreau and Patrik Laine continue to be the only real fantasy-relevant players on Columbus, but there are a few Blue Jackets worth trying on to keep you out of the cold this week.

The centerman only has one goal in five games since returning after missing a month but that should change as things move along. He’s the Blue Jackets’ top-line center and plays on the top power-play unit as well.

The second-line center has Laine as his right winger and plays on both special teams units as well. Roslovic is hot with six points (one goal, five assists) during his five-game point streak.

Nyquist finishes out the line with Roslovic and Laine. He had a goal and an assist in Saturday’s win against the Sharks and now has four points in his last four games. A four-game week would be a great time for Nyquist to stay hot.

The Islanders are the third and final team playing a total of four times with three or more games on lighter nights this week. They’re not known for their offensive firepower but there are some players worth looking at this week.

Pageau plays on the third line at even strength but moves up to the top power-play unit. He has three assists in his last five games and should see those points keep coming.

I’m cheating a bit with Lee available in less than half of leagues, but he

The journeyman has settled in a bit in Chicago. He’s playing on the top line and has 30 points in his first 41 games. Domi has been solid over the past month or so with 10 points in his last 11 games.

Beauvillier was once a solid under-the-radar fantasy hockey opetion but now he’s available in nearly all of leagues. The winger is getting a crack on the top line and the second power-play unit while looking to break through. He has 19 points (9 G, 10 A) in 45 games this season.

Mayfield plays well over 20 minutes a night — over 22, even — while anchoring the top pair with Noah Dobson. He’ll never be the offensive dynamo that his partner is, but Mayfield is a solid depth option that already has 100 blocks and 64 hits in 48 games this season.

Ilya Sorokin has rightfully taken the starting job on Long Island, but Varlamov is right there as a solid backup. He should get a home start against either Detroit or Vegas this week so he’ll have a chance to get a w and rack up some points for you.