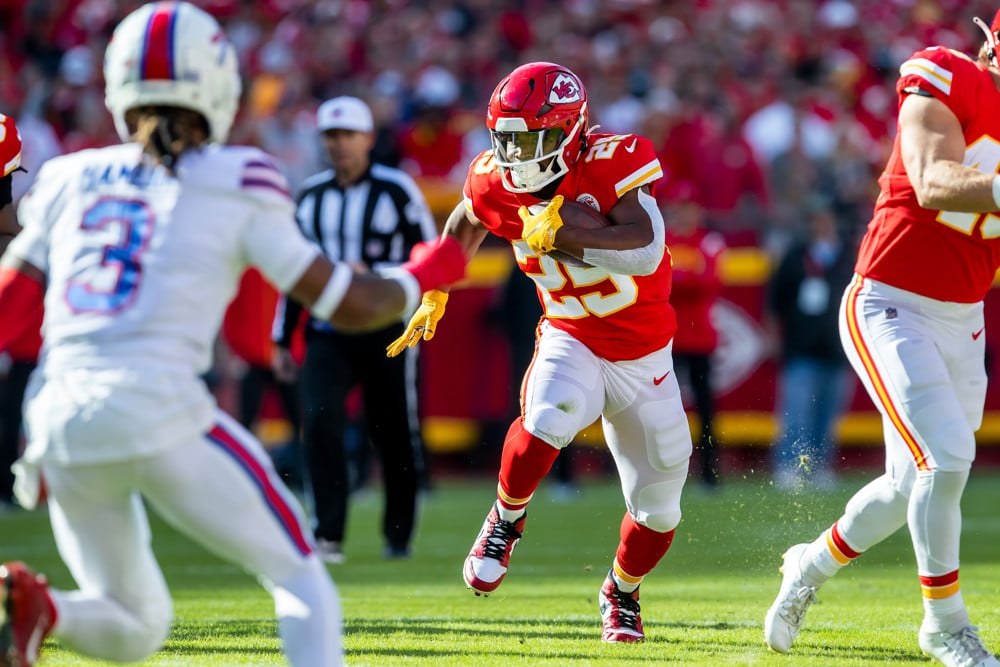 Down to the Final Eight. The NFL playoffs are well underway and only a handful of teams are left in the fight for a championship. As we get deeper into the postseason, the margin for error shrinks, and teams must put their best product on the field.

Unfortunately, injuries oftentimes hinder this, negatively impacting both player availability and productivity. Whether you are playing DFS, betting on a side, or raiding the player props market, understanding injuries can give you an edge. Welcome to the NFL Divisional Round Injury report, where I break down the biggest injuries for the week!

Note: This injury report will be updated until the conclusion of Wild Card Weekend. For the most current injury news and analysis, follow me on Twitter @SGPNFootballDoc!

The Kansas City Chiefs rushing offense got off to a bit of a slow start in the first half of the season. With a number of solid options in the backfield, the team struggled to find the most effective rotation. The running game situation became a little clearer when one of these top-backs got injured in Week 11. RB Clyde Edwards-Helaire suffered a high ankle sprain and was placed on the injured reserve.

A high ankle sprain refers to damage to the ligaments (syndesmosis) connecting the lower leg bones above the ankle. These ligaments serve as shock absorbers and play a role in stabilizing the lower leg during running and jumping. A mild high ankle sprain typically takes between four and six weeks for a full recovery. Edwards-Helaire’s route running and cutting ability would be hindered upon return due to the injury.

The Chiefs began this divisional round with some positive injury report news. Edwards-Helaire was designated to return off of IR and return to practice. The expectation is that the RB will try to get on the field this week. However, there is a lot of mystery surrounding what this return will look like.

Not only will he likely need a game to adjust as he has been out for a long time but his role is uncertain. Fellow RB Isiah Pacheco has been the #1 option on the ground while McKinnon has dominated the receiving game.

RB Clyde Edwards-Helaire has returned to practice but did not get activated this week. – SIT

It has been a frustrating second half of the season for Chiefs WR Mecole Hardman. He injured his groin during Week 9 back in November against the Titans. Hardman was quickly put on IR but was expected to return before the season was over. He had returned to practice and was making progress to return in Week 18. Unfortunately, he suffered a setback to his injury and has been unable to practice since.

At this point, it is looking like Hardman will remain on the injury report for longer than just the divisional round. A groin strain refers to damage to muscles of the inner thigh but is really an umbrella term. It could involve abdominal muscles, hip muscles, or both.

These injuries can be tricky as they have a high reinjury rate. It often gives a false sense of being healed sooner than it actually is. The groin plays a big role in allowing a player to change direction quickly and rotate their body. Hardman would need to string together a few practices in a row to feel confident about him producing this week.

WR Mecole Hardman is still not practicing and it is unlikely we see him play this week. – SIT

In order for the Giants to go on this Cinderella story-like run, they’ve needed guys to step up. One of these guys is WR Isaiah Hodgins who only joined the team in November. He was a very late addition to the injury report last week after he injured his ankle in practice.

However, he was able to play through the ankle injury and produced to the tune of 100+ yards and a TD. With some help from Hodgins himself (picture below), it appears he is dealing with a low ankle or later ankle sprain.

The good news is his place on the divisional round injury report appears much more precautionary this week. Hodgins was able to be productive throughout the entire game and has recorded two limited practices. Low ankle sprains occur when a player’s foot gets caught and rolls inward causing lateral ligament damage.

In minor cases, the ligaments are able to heal in 1-3 weeks. Hodgins was likely limited last week but it did not stop him from having a productive day. I would expect him to be even healthier going into this week but does face a tougher defense.

WR Isaiah Hodgins is expected to play and be healthy enough to produce this week. – START

Isaiah Hodgins ankle. He still went for 105 yards and a TD. #TogetherBlue pic.twitter.com/TPZBKcIFhf

The one-time MVP favorite is heading into the divisional round off of the Eagles’ official injury report. Philadelphia Eagles QB Jalen Hurts has been dealing with a shoulder injury he suffered against the Bears.

He was landed on by a Bears defensive lineman, with most of the force directed at his throwing shoulder. Hurts finished the game, but the injury did cause him to miss two weeks in a row. After Philly dropped those two games, Hurts played in Week 18 to secure the #1 seed.

The Eagles have not disclosed exactly what type of injury he is dealing with, but it is most likely an AC sprain. These injuries can be played through but are painful and do negatively affect a player’s throwing ability temporarily. On the other hand, these injuries typically heal in 2-4 weeks, depending on the severity.

The week of rest appears to have been worth it as Hurts is reportedly “feeling good” heading into this week. After a mediocre performance in Week 18 where he appeared limited, he is fully participating in practice. Hurts shoulder should be close to being healed at this point, however, it does not mean it can’t be reinjured on Saturday. This may lead to the team being more hesitant to call the designed runs that make him so dangerous.

QB Jalen Hurts has shed his injury designation and is likely close to a 100% but may be dealing with some rust. – START

The Buffalo Bills managed to put up 34 points last week despite not having one of their starting WRs out there. Bills WR Isaiah McKenzie suffered a hamstring injury in Week 18 and was unable to play last week. A hamstring refers to damage (tear) to the muscle in the back of the upper leg.

The hamstring plays a big role in generating leg power and controlling the ability to decelerate. Typically, hamstring injuries take at least two weeks to heal in minor cases.

McKenzie is back practicing with the team as a full participant, however, it is difficult to trust him this week. Hamstring injuries come with a HIGH reinjury rate and the first two weeks are when a player is at most risk. He will be limited in his jumping and acceleration abilities. There is also a question of if he will be losing targets to one of the Bills’ new additions, WR Cole Beasley.

WR Isaiah McKenzie is likely to play this week but his high reinjury chance and limited ability make him a risky play. – SIT

Bills’ WR Isaiah McKenzie, who missed Sunday’s wild-card round due to a hamstring injury, was a full participant in practice today, and is on track to play in Sunday’s divisional round vs. the Bengals.

San Francisco 49ers WR Jauan Jennings is a player who typically does the dirty work for this team from the WR position. He is known to be an excellent blocker on the perimeter and does whatever it takes for the team to win. Well, it makes sense that he may have picked up an ankle injury during the game but he did not let that end his day.

Jennings ankle injury is likely a mild low ankle sprain, which has a very short recovery time. It typically only takes 1-3 weeks for those lateral ankle ligaments to heal. These injuries can negatively impact balance and cutting ability but not significantly in mild cases. With Jennings practicing in a limited fashion to start the week, I would expect to see him Sunday.

WR Jauan Jennings is dealing with a minor ankle sprain but is expected to play Sunday. – MONITOR