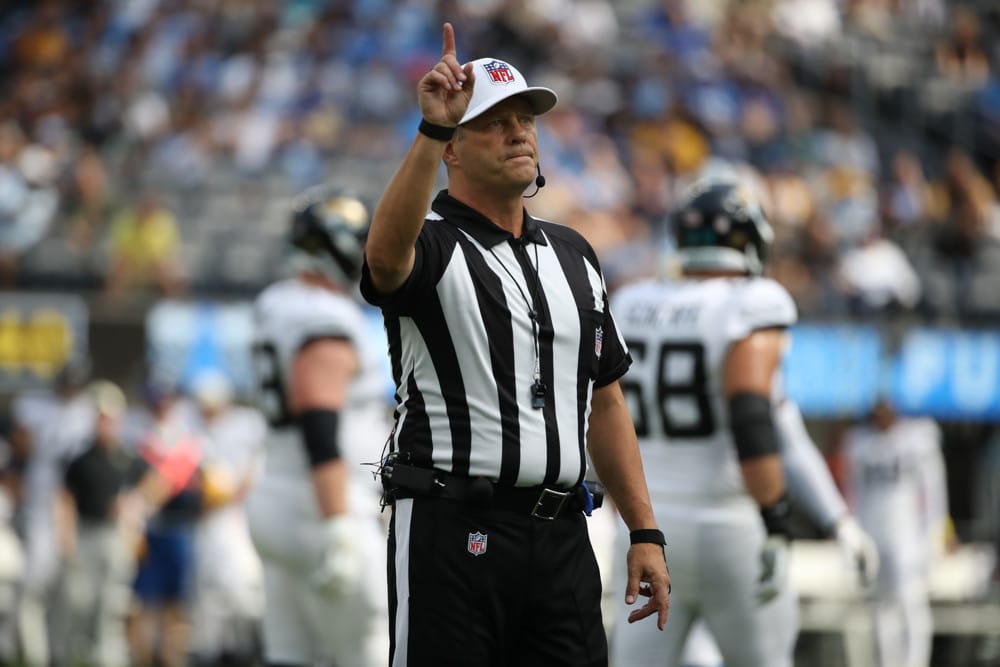 I am back with the NFL Referee Assignment and betting stats/trends for the NFL Playoffs! It certainly was an up-and-down regular season as far as the referee report went. However, we can now narrow it down to the handful of NFL referees who will be officiating the NFL playoff matchups! Let’s dive into the Super Wild Card weekend NFL referee assignments! 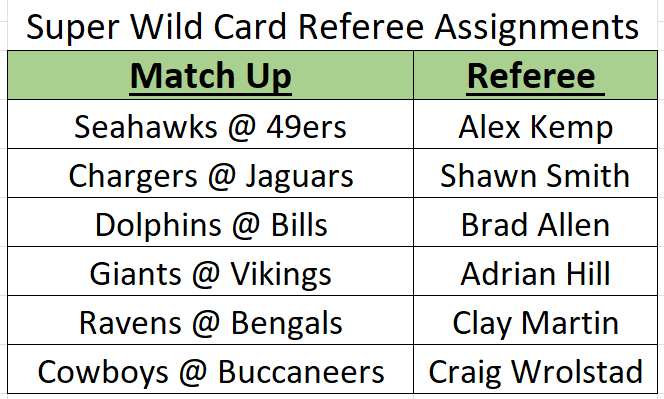 The first NFL Referee Assignment to kick off NFL Super Wild Card weekend belongs to Alex Kemp! This season, Kemp was favorable to the road teams. In fact, road teams finished the season going 10-6 (62.5%) against the spread in games officiated by Kemp. Furthermore, Kemp officiated two games this season involving the San Francisco 49ers. First, Kemp was assigned to officiate the Week 7 matchup between the Kansas City Chiefs visiting the 49ers.

The Chiefs blew the doors off of the 49ers in that matchup 44-23, covering the spread and winning outright as the road team. More importantly, Kemp was assigned to officiate the Week 15 matchup between the 49ers visiting the Seahawks. The 49ers went on to win that matchup in Seattle 21-13 covering the 3.5 spread as a road favorite.

Brad Allen has been one NFL referee who has been favorable to the home teams over the last two seasons. In fact, home teams are 17-13-1 straight up and 18-13 against the spread. Allen is assigned to officiate the AFC matchup between the AFC East division rivals Miami Dolphins and the Buffalo Bills.

The two teams split their regular season matchup this season. Additionally, Brad Allen officiated one game each involving these two teams. The Bills won their Week 6 matchup versus the Chiefs in Arrowhead Stadium 24-20 as a three-point favorite. Further, the Dolphins lost their lone game this season against the Patriots in Week 17 as a 2.5-point underdog.

Home teams have found plenty of success in games officiated by Clay Martin over the last two seasons. In fact, home teams in that span are 20-11 (64.5%) straight up and 18-13 (58.1%) against the spread. The Super Wild Card weekend NFL Referee assignment draws Martin to the AFC North matchup between the Baltimore Ravens visiting the Cincinnati Bengals.

This season, Martin officiated one game involving the Baltimore Ravens which resulted in a Week 6 loss to the New York Giants as a -5.5 road favorite.