Part II of the Hawaiian Swing kicks off this week in Honolulu! The first full field of the year takes on historic Waialae Country Club for the 2023 Sony Open.  As always, here is your early deep-dive of the 2023 Sony Open and a preview of how to bet. In addition, listen below to the Golf Gambling Podcast for more information about golf betting.

Bettors and fans were spoiled by the field at the Sentry Tournament of Champions. With the new PGA Tour schedule, almost all the top players will appear together in at least 20ish events every season at designated “elevated” events. These include the majors, the PLAYERS, and other PGA Tour venues with significant boosts to purses.

The Sony Open, however, does not carry an elevated designation. As such, the field this week is much weaker than we saw at Kapalua.

Headlining the field is Tom Kim. Kim is currently a darling of the PGA Tour as he’s been featured in several clickbait stories from them over the last few weeks. His play is backing up the hype though. He finished T5 last week at the Sentry TOC, and his game is perfect for Waialae Country Club. He’ll look to add his third win on the PGA Tour this week at the 2023 Sony Open.

The golf course was designed by Seth Raynor and opened shortly after his death in 1926. Seth Raynor is responsible for some of the most iconic and classic golf courses in the United States. His portfolio includes the Old White TPC at the Greenbrier, Chicago Golf Club, Fishers Island Golf Club, the Dunes Course at Monterrey Peninsula, and the Yale University Golf Course.

The course was originally 6,600 yards from the championship tees and was heavily influenced by other notable golf courses around the world. Since its opening, the course has undergone a lengthening to just over 7,000 yards and a few minor tweaks. Overall, it still has retained most of its charm as a time capsule into golf’s past.

Below is a digital flyover of Waialae Country Club. It’s a great video to help preview this year’s Sony Open:

Fans may also recognize Waialae Country Club if they played the video game on N64 in the late-1990’s:

The routing of the golf course is exceptional. There is a great variety of tee-to-green direction hole to hole that keeps a player on their toes. A wide variety of tee-to-green routing makes it a challenge in windy conditions. It forces a player to think their way around the golf course hole to hole. The creative layout of Waialae Country Club is similar to that of the Old White TPC (a fellow Seth Raynor golf course) and Sedgefield Country Club.

Waialae is a second shot golf course where the angle of approach is more important than distance. The Bermuda greens at Waialae are some of the purest on tour. As intended, the golf course promotes hitting the correct side of doglegs to go at pins. Wind could also be a factor, especially on the second half of the Back Nine that plays closer to the beach.

There are similar concepts for both holes. Each are long slightly doglegged Par 4’s with front-to-back sloped greens. Each feature reversed cambered greens that feed towards a deep green-side bunker. Both holes also encourage players to take aggressive lines down the right side of the fairway. There is plenty of room to bail out left on both holes. But that provides a less than optimal angle to the pin. Tee shots down the right are more risky but provide beautiful angles to the green.

If you really want a deep dive on why Par 3’s that feature a Redan green are so popular with golf nerds, may I suggest this post written by Andy Johnson of The Fried Egg. As far as the 17th at Waialae, it’s the most exposed hole on the golf course to the wind. Given the combination of both a small green and its sloping from right to left, a par is a very good score on this hole. Any tee shot that finds its way into one of the three bunkers off the right side of the green is pretty much dead.

The 17th green was restored before the 2018 Sony Open by Tom Doak. He added quite a bit of movement to the green to restore it to its true “Redan” nature. This was met with some criticism from the players. They complained that the green was a bit too firm and difficult to stop the ball. Over time, greens get softer and softer as it sees more foot traffic. That’s made the hole not as severe as in years past. But it still gives players fits due to its nature.

Here are some relevant facts and statistics about Waialae Country Club:

1. Like at the Sentry Tournament of Champions, Waialae Country Club is wall-to-wall bermudagrass. While most bermuda golf courses on the PGA Tour feature either TifEagle or Champion bermuda strains, Waialae’s is TriDwarf. This is one of the most common and popular bermuda grass strains. For handicapping purposes, however, targeting overall performance on all bermuda types is acceptable.

2. Waialae Country Club plays a little over 7,000 yards long and is a Par 70. The golf course has only two Par 5’s. The Par 5 9th is essentially a long Par 4. The Par 5 18th, however, doglegs severely left and is pretty difficult to keep in the fairway should the turf play firm.

3. Absent of wind, the golf course can yield plenty of birdies. This was especially seen the last two Sony Opens. In 2021 and 2022, the scoring average for the field was about -2 per round. In addition, there isn’t a single strokes gained category where Waialae plays more difficult than the average PGA Tour venue.

The tournament directors, however, are looking to change that. A major change to the 2023 Sony Open is the length of the rough. This year, Waialae will feature 3″ bermuda rough. That’s up from 2.25″ in 2022. The goal is to make the golf course a little more difficult should players not find the fairway. For those who keep it in the short grass, however, it should still yield plenty of birdies.

Prior to this year, Waialae was one of the least penal golf courses to miss a fairway at, with about middle of the road difficulty for those who find the rough. Despite a historical 62% driving accuracy rate, it didn’t bother the players much if their tee shots found the rough. With 3″ bermuda in 2023, however, expect that to be a little more difficult for the wayward drivers.

To give you all some perspective on what this means – typically the Shriners Childrens Open (at TPC Summerlin) features 2.25″ bermuda rough. That’s one of the easiest scoring tournaments on the PGA Tour.

Meanwhile, the Charles Schwab Challenge at Colonial features 3″ bermuda rough. That golf course, like Waialae, is fairly short. However, that’s one of the tougher scoring tournaments on the PGA Tour. While I don’t expect it to play as difficult as Colonial, Waialae should show some more teeth this week.

4. The historical green in regulation rate at Waialae is 72.4%. That’s high for PGA Tour standards. However, given the rough has been beefed up in 2023, expect that clip to come down a bit. It’ll be a little more difficult to control spin and trajectory coming out of 3″ rough this year than in years past.

5. As mentioned earlier, none of the strokes gained categories at Waialae play more difficult than a standard PGA Tour setup. One of the easiest areas at Waialae compared to average PGA Tour venues is chipping from off the fairway. Waialae is the easiest place to chip off of tight lies than anywhere else on the PGA Tour. Anyone who might struggle in this area could lose a lot of strokes to the field.

Next, let’s take a look at the relative skillset chart of what types of attributes tend to be more successful at Waialae Country Club: 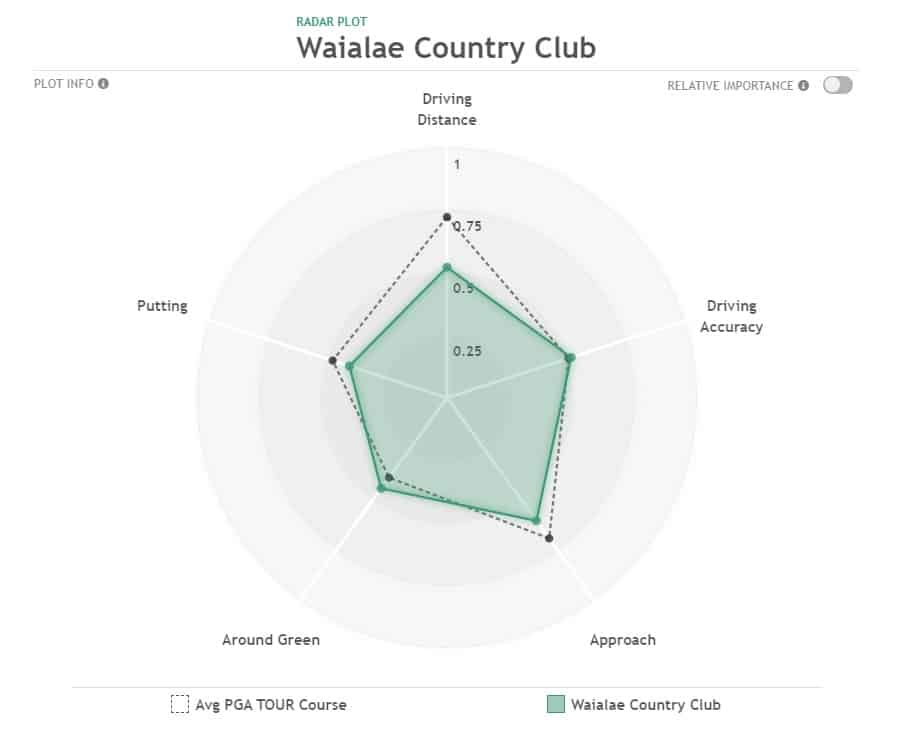 Waialae is one of the least correlated golf courses on the PGA Tour. There’s little correlation in driving distance, iron play or putting for those who typically make up the top of the leaderboard at the Sony Open.

The only characteristics that seem to suggest a commonality among Sony Open hopefuls is in driving accuracy and around the green. That might not necessarily have to do with the golf course itself, however. It might be because the Sony Open tends to attract players who possess strong skillsets in those players. Players like Kevin Kisner and Matt Kuchar play the Sony Open a lot. And they are the types who do best there.

Last week at the Sentry Tournament of Champions, there wasn’t a strong concentration of any approach shot bucket at the golf course. At Waialale, however, it is very defined. Over 80% of all approach shots hit at the Sony Open will come from between 125-225 yards. That’s a wide range. However that is also one of the strongest concentrations of approach shot proximity on the PGA Tour.

In summary, here are the main takeaways from this preview of what to expect at the 2023 Sony Open.

1. The typical player who excels at the Sony Open tend to be more accurate players off the tee and do well around the green.

2. To make the golf course tougher, the tournament will grow up the rough to 3″. This might put more of a premium on hitting fairways than it has in the past.

Follow these tips from this preview, and you should have a successful week betting on the 2023 Sony Open.