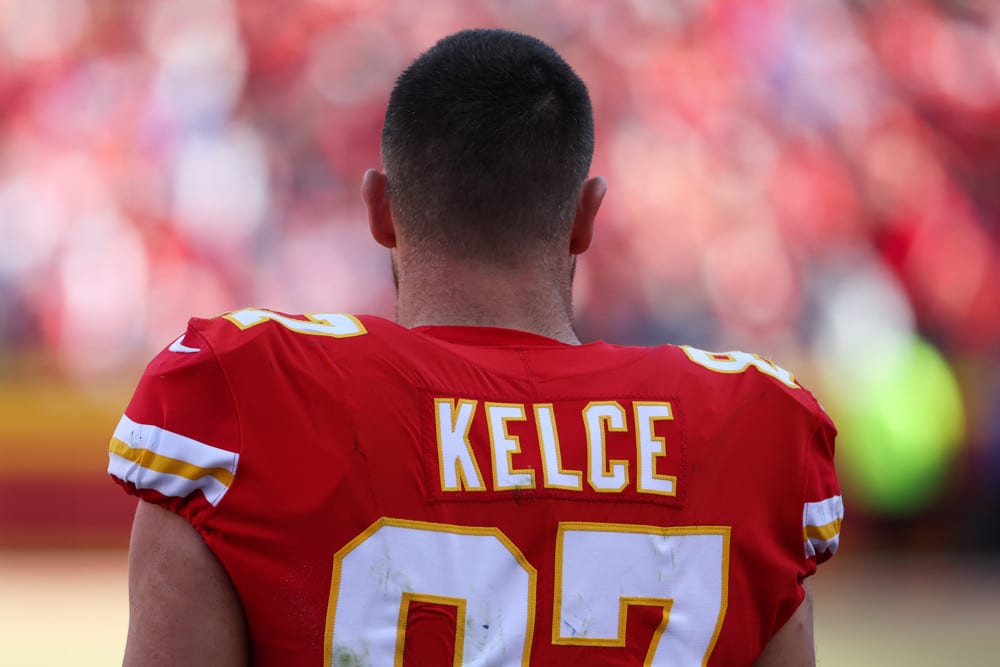 Tight ends are really difficult to move on from because there are just so few of them. My best advice is to make sure you pay up for Tight Ends in your start-ups. It is much easier to move on from a veteran Wide Receiver with the recent influx of talent.

Tight Ends start to decline between the ages of 30 and 32, even the best ones. We saw it with Jimmy Graham and with Rob Gronkowski. Historically just under 90% of TE1 performances have happened with Tight Ends 32 or younger. This points directly at Travis Kelce and Zach Ertz who are 2 of the top Tight End options.

With that, here are some 2023 Tight End sell candidates, with a couple buys sprinkled in as well.

I am sure that many of you saw Kelce on the cover and expected to yell at me for saying sell. Of course, everyone has a price and a godfather-type offer might pry him from my roster. However, at this point, this is a supply and demand situation vs playing the age card.

If you played in the championship this year or the last 2 years, you had a top 2 Tight End. Kelce is just too dominant with how far away he is from the rest of the pack. Moving down from an older Running Back to a lower tier might be a difference of almost 100 points!

What would you trade for Kelce if you were a contender?

What would you accept to move Kelce?

Evan Engram finished the season strong, minus in Week 17. He was on a lot of sleeper lists and he really cashed in after a slow start to the season. This is a player that has a history of being inconsistent and letting us down. Here is why I am trying to sell.

First, He is a free agent in 2023 and we don’t know where he will play yet. Second, he has a history of letting us down due to injury or inconsistent play. You can sell high and if he is your 2nd Tight End option, you can improve other positions.

This is a late 2nd in your Superflex leagues. Depending on your rosters, he might be worth more than he is to trade. If you have any depth, he could be a nice piece to move.

Darren Waller was one of the biggest letdowns this season due to injury. Hate to call a player a bust due to injury, but anyone that drafted him as their early-round Tight End would. In your fantasy football regular season, you could have started Waller in only 2 games.

There could be a number of options and what Waller did in those 7 games (50%+ snaps) shows that he is not slowing down. The first reason, the price tag has dropped tremendously. People were burned and people are trying to get out.

Second, you could see his value jump if they land a proven Quarterback. Aaron Rodgers, Jimmy Garoppolo, and Tom Brady are among the options listed. The market is fluid and I want to buy now before it changes.

Trade Values for Waller have plummeted. FantasyPros has him at 21 on their January Dynasty Trade value chart. This is equivalent to 2023 3rd (early-mid) in Superflex and a 2nd (mid) in 1QB.  According to the trade value charts (SGPN + FantasyPros), you can get a 2nd or a 3rd plus waller for players like George Kittle, Pat Freiermuth, or Dallas Goedert.

Gerald Everett has the athletic profile we are looking for. Every off-season he is on the breakout list and this year was his best fantasy football season. He landed in a great situation with a great Quarterback. He also had a lot of opportunities with Mike Williams and Keenan Allen missing a lot of time.

This is also an offense that notoriously has used the Tight Ends a lot under Joe Lombardi. We do not know if Lombardi will return with the Chargers and that could lead to fewer targets for Everett. A healthy Williams and Allen will ultimately result in fewer targets. Everett had some peaks this year, but he finished as the TE13 overall with 129.7 points in 14 games.

He hopefully is not your only option at Tight End, use him plus a pick to upgrade at the position in that case. If not, you can trade him for draft capital or move up the board on draft day to a Tight End needy team. A late 2nd round (1QB) value per the charts seems like too much to ask.

If he is my 2nd Tight End I would look to get a pick plus a player for him. If you can get a younger Tight End like Daniel Bellinger, Chigoziem Okonkwo,  or Trey McBride plus an early to mid 3rd that would be a win for me.

Tyler Higbee has shown up in stretches and flashes some fantasy production. In 2019, Higbee went on a crazy stretch for five games to finish the season with a range of 18.6 to 23.70 fantasy points. He only had three games in 2020 with 10 or more PPR points. In 2021, he had some random production with 10+ points in four regular season games.

This season, in the last 3 games of the year, he was solid with 9.1, 12.9, and 23.50 points. This year he started off playing well with four top-15 performances between Weeks 2 and 6. He was a PPR machine with 48 targets in the first 5 weeks. He then was essentially unstartable from Weeks 6-15 with the exception of Week 10 (Arizona, no shock).

However, in Weeks 15 and 16 Higbee was back at it scoring 43.1 points in these two weeks, including a TE2 overall finish in Week 16. He let you down again in Week 17 and you need to stop letting him hurt your team. Sell him for whatever you can get, the trade values listed are suggested early-mid 3rd round picks. I would do it and try to move him for similar prices to Everett.

I am very interested in what I have seen from Johnson each of the last few seasons. Some might view him as a sell-high candidate. I disagree and think the value points to buy vs sell. He is much more valuable on my roster than the late 3rd or 4th that I can get from him in a trade.

Johnson is a converted WR and his athleticism stands out. He had 5 top-12 Tight End finishes in 2022! Johnson is a free agent in 2023 and he is a tag candidate if the Saints choose not to resign him. Other teams will be interested if he hits the market and that could bring even more to his dynasty value. Buy him now before people start to get excited about free agency.

Thanks for checking out this 2023 Tight End sell candidates article. Check back with SGPN daily for more fantasy football content.