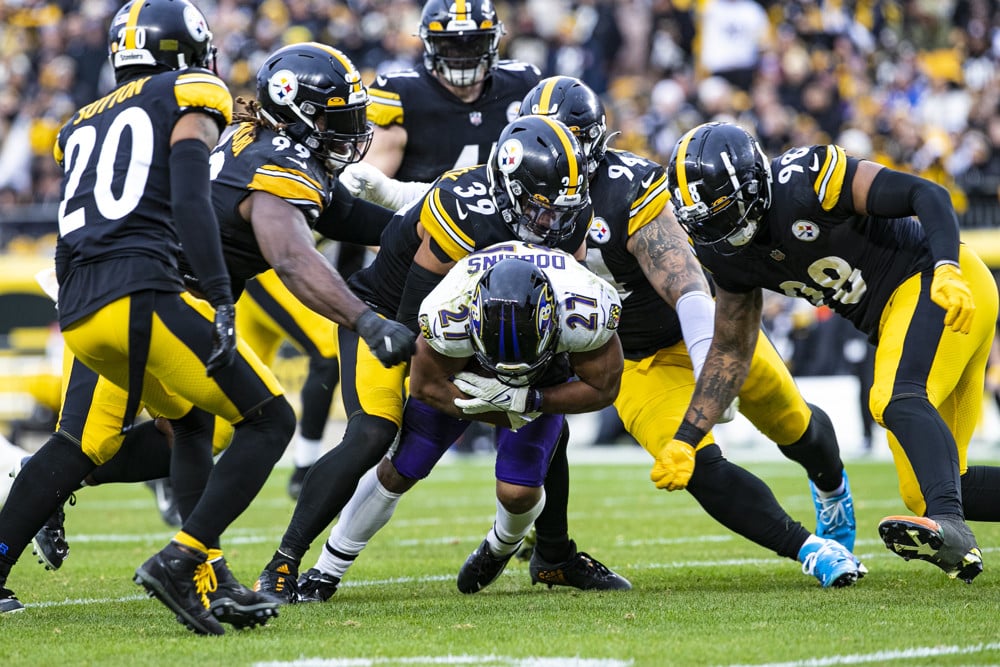 The nightcap for the first day of 2023 is a good one. The Pittsburgh Steelers head to Baltimore to take on their division rival Baltimore Ravens. Lamar Jackson will once again miss the game this week, leaving Tyler “Snoop” Huntley as the starting quarterback for the Ravens.

The Ravens have clinched a playoff spot and are still alive for the AFC North divisional crown. The Steelers are “on the bubble” and will need some help. Head coach Mike Tomlin has never had a losing season in his fifteen-year career. The Steelers are 7-8 with just two games remaining. For this look at the game, we will use lines from our friends at WynnBet.

The spread for this matchup is currently -2 in favor of the Baltimore Ravens. WynnBet is paying -110 either way for each team. Early on, a nice 69% of the public is weighing in favor of the Steelers, who originally opened at +2.5 point underdogs.

Lamar Jackson left the game early on December 4th against the Denver Broncos, and it’s been Huntley under center since. In Jackson’s absence, the Ravens have won three of four games, including the Denver matchup. However, they’ve won those three games by an average of just three points, including a victory over the Steelers 16-14 in week 14.

The Pittsburgh Steelers on the other hand, have won four of their last five games, the Ravens’ loss being the lone exception. They’ve also had different quarterbacks at the helm during this time, but rookie Kenny Pickett is in line to start this one.

In these low-scoring divisional matchups, it’s hard to look past the underdog, and that’s the case for me here. This should be a low-scoring, close game, and the Ravens came out on top in the first matchup. I’ll take the points with the Steelers here.

A "grow-up" moment for Mike Tomlin and the @Steelers on Christmas Eve 💪@InsideTheNFL pic.twitter.com/x6ZYdJG8Ca

Well, you’re already in the know as to where I’m going with my money line pick, but let’s break down the numbers to get a clearer idea of why you might want to toss the Steeler’s ML in a few parlays. WynnBet is offering +120 for the Steelers to win outright, while the Ravens are -140

WynnBet is offering this line at 35 and paying -110 either way. As mentioned above, when these teams played a few weeks ago, the final score was 16-14 for 30 total combined points. This game has the lowest total on the board this week, and for good reason. Baltimore is one of the best teams when it comes to the under at 11-4. In comparison, Pittsburgh is 9-6 to the under.

This is going to be a defensive battle and grind type of game. While I am siding with the public on the Steelers, I will fade them here. Early numbers show 65% of the bets are on the over.

Tyler Huntley has done a good job filling in for injured Lamar Jackson and like Jackson, Huntley doesn’t mind getting out of the pocket and scrambling. When these teams played a few weeks ago Huntley was held to 31 rushing yards on nine attempts.

However, with questions at that wide receiver position for the Ravens this week, and with Huntley running for his life from this vicious defense. The only way the Ravens are going to stay in this game is Huntley using his rushing ability. All he needs is to break one big one and this cashes

This one is simple but offers great value and is easily achievable. The case for the Steelers has been laid out above as has the case for the under. If the Steelers can win this game, they can do so by keeping it low scoring and pounding the rock. Add in the alternate under of 25.5 and that gives us (+700).