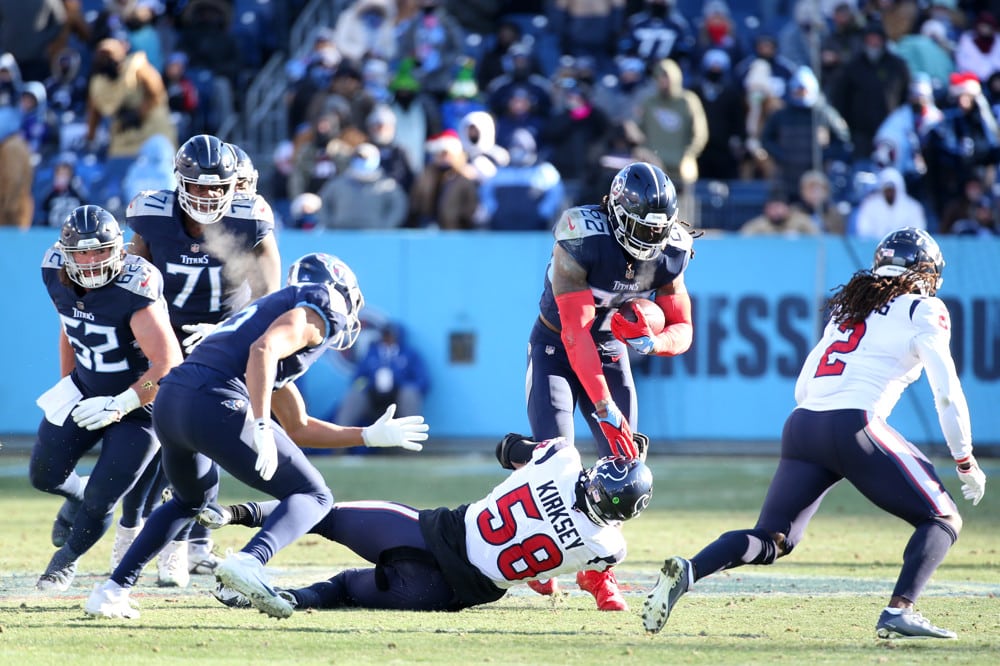 It’s Championship week, boys and girls. All those hours in the offseason preparing, sweating and grinding all come down to this. Congratulations on making it this far, but the job is not finished.

You need to put your best effort forward to secure this W. This start and ends with playing your best possible lineup. Injuries and coaching decisions will heavily affect your decisions.

Thankfully, I am here to provide you with all you need to know about the biggest injuries this week. Welcome to the Week 17 Fantasy Football Injury Report!

Note: This injury report will be updated until the conclusion of Week 17. For the most current injury news and analysis, follow me on Twitter @SGPNFootballDoc!

One of the few offensive bright spots on this Denver team finds himself on the Week 17 injury report. TE Greg Dulich had to exit the Rams game last week due to a hamstring strain. He was quickly ruled out of the game and is not practicing to start the week. These are very poor signs for the availability of the Broncos TE.

A hamstring sprain refers to damage (tear) to the muscle in the back of the upper leg. This is one of the most burdensome injuries in the NFL, and takes several weeks to recover. Hamstring strains are very frustrating as they have high reinjury rates. Despite seemingly feeling better quickly, the muscle needs time to heal before the player can return to full speed.

With the Broncos out of the playoffs and how late it is in the season, I would be shocked if Dulcich plays again this season. The risk of returning from a hamstring injury before two weeks is very high for a reinjury.

Dulcich injured his hamstring and is likely out for this week. – SIT

Rookie WR Christian Watson has unexpectedly become the Packer’s top target late in the season. However, his Week 17 availability is in question with him on the injury report. After a productive first half, Watson has been ruled out of the game with a hip injury. The injury is not considered serious as the Packers’ head coach labeled him as “day to day.”

Unfortunately, the hip injury not only kept him out of the second half but also out of practice to start the week. He still has two more practices to upgrade his availability, but there is some real concern for this week. I would not feel confident putting Watson in my lineup until he logs full practice participation.

Packers WR Watson is dealing with a hip injury and is in jeopardy of missing Week 17. – MONITOR

The one-time MVP favorite remains on the injury report for Week 17. Philadelphia Eagles QB Jalen Hurts is dealing with a shoulder injury that he suffered against the Bears.

He got landed on by a Bears defensive lineman, with most of the force directed at his throwing shoulder. Hurts was able to finish the game, but reports have surfaced that the injury may cause him to miss some time.

Philadelphia could not clinch the #1 seed without their starting QB last week. This increases the pressure for Hurts to try to play slightly, but the Eagles can still exercise caution. With only needing to win one of their last two games, there is still no need to rush Hurts.

The Eagles have not disclosed exactly what type of injury he is dealing with, but it is most likely an AC sprain. These injuries can be played through but are painful and do negatively affect a player’s throwing ability temporarily. On the other hand, these injuries typically heal in 2-4 weeks, depending on the severity. After no practice Wednesday, Hurts did return Thursday. He has a real shot to start this week in a game the Eagles need a win.

Hurts practice status will give the best indication on if the Eagles push him to play this week. – MONITOR

The most surprising news of the Week 17 injury report comes out of Tennessee. The Titans play the Cowboys Thursday night and have nothing to play for. Their playoff chances will come down to their Week 18 matchup with Jacksonville. Mike Vrabel has responded to this by seemingly resting any player with an injury designation.

Unfortunately, stud RB Derrick Henry is among this long list of players. He is dealing with an undisclosed hip injury that will likely keep him sidelined this week. The nature of the injury hasn’t been disclosed, but it does not appear too serious.

Henry participated in practice on Tuesday, and many thought he would play Thursday. By listing him and other key players as doubtful, it is clear the Titans want to rest their key guys. The decision makes sense but is a killer for Henry fantasy managers.

Henry is listed as DOUBTFUL and not expected to play Thursday due to a coach’s decision. – SIT

Titans RB Derrick Henry is DOUBTFUL to play Thursday against the Cowboys.

The Patriots’ offense has not received much good news this season. However, they may receive some in the form of the Week 17 injury report. TE Hunter Henry was ruled out early in the game last week with a knee injury.

Despite being ruled out quickly, it appears the injury is mild. Henry is considered “day-to-day” and was limited to participation in practice Wednesday. If Henry is able to log full participation this week, my confidence in him will increase greatly.

Henry is practicing to start the week and has a good chance to play in Week 17. -SIT

Tua Tagovailoa has been one of the most talked about players this season. Unfortunately, a big reason for this has been his injury concerns. It’s safe to say that seeing Tua on the Week 17 injury report with ANOTHER concussion is not what anybody wanted. Interestingly, Tua played the entire game last week. It wasn’t until after the game that he reported symptoms.

A concussion is a mild traumatic brain injury that leads to disruption in the function of the brain. It hinders the speed and ability with which players can process the information on the playing field. Research has shown that most NFL players return to playing in less than seven days from injury. However, this changes when multiple concussions have been suffered in a short period of time.

Due to the increased health concern with multiple concussions, Tua has been ruled out this week. Backup QB Teddy Bridgewater will get the start for Miami against New England. There is a real chance we may not see Tua for the rest of the regular season.

Tua is ruled OUT with a concussion this week. – SIT

Dynamic Baltimore QB Lamar Jackson remains on the injury report for Week 17. Ravens fans and fantasy owners alike held their breath a few weeks ago as Jackson had to be helped off the field. He suffered a knee sprain and was quickly ruled out of the game. Tests revealed that Lamar suffered a PCL strain and is being referred to as “week-to-week.”

The PCL is a stabilizing ligament in your knee that is often injured by another player running into the back of a player’s knee. The strain appears to be mild, as the team’s recovery window is between 1-3 weeks.

With a capable backup in QB Tyler Huntley and already squarely in the playoff picture, it is unlikely the Ravens will rush to bring Jackson back. He will want to be fully able to trust his knee before returning to the field, as he relies on his legs so much to operate effectively.

As of Wednesday, Lamar is still not practicing. This is his 10th straight missed practice. There is real cause for concern at this point. The Ravens are not providing any injury updates, and Lamar not being under contract next year could be affecting this. The expectation at this point is that Huntley will be starting at QB this week

The Ravens QB has not practiced yet this week and is unlikely to play. – SIT

Poor Mike White. Just as he was proving to the world that he is a much better QB than Zach Wilson, an injury knocks him out. White is dealing with some fractured ribs, and his biggest hurdle is not being medically cleared to play yet.

Rib injuries are very painful but can be played through if they are deemed safe. Clearly the Jets’ medical staff thinks there is a high risk that the fractures could worsen by taking hits.

In a positive update to the Week 17 injury report, Mike White has officially been medically cleared to return. He has already been named the starter for Sunday. He faces a bad Seahawks defense and will look to perform well in a must-win game. The extra rest White was forced into increases my confidence in his ability to produce this week.

Jets QB Mike White has been cleared and will start Sunday. He is a decent streaming option if you are really in a pinch. – START

Seattle Seahawks WR Tyler Lockett suffered a pretty severe hand injury in Week 15. The injury required substantial surgery, and many assumed his season would be over. However, reports have come out that he could return as early as this week.

Surprisingly, it seems Lockett is actually on track to return from the injury report in Week 17. The exact nature of the injury has not been disclosed. However, it appears the team surgeon is the one pushing for the early return.

Although this is a very aggressive recovery timeline, the Seahawks are fighting for a playoff spot. Lockett did not practice on Wednesday, but he was actively participating in the team’s walkthrough. Carrol has said that Lockett will not need to practice this week to play but just needs to show he is ready. With him already catching and throwing a football, he has a real shot at playing this week.

Lockett has a real chance to play this week against the Jets. – MONITOR