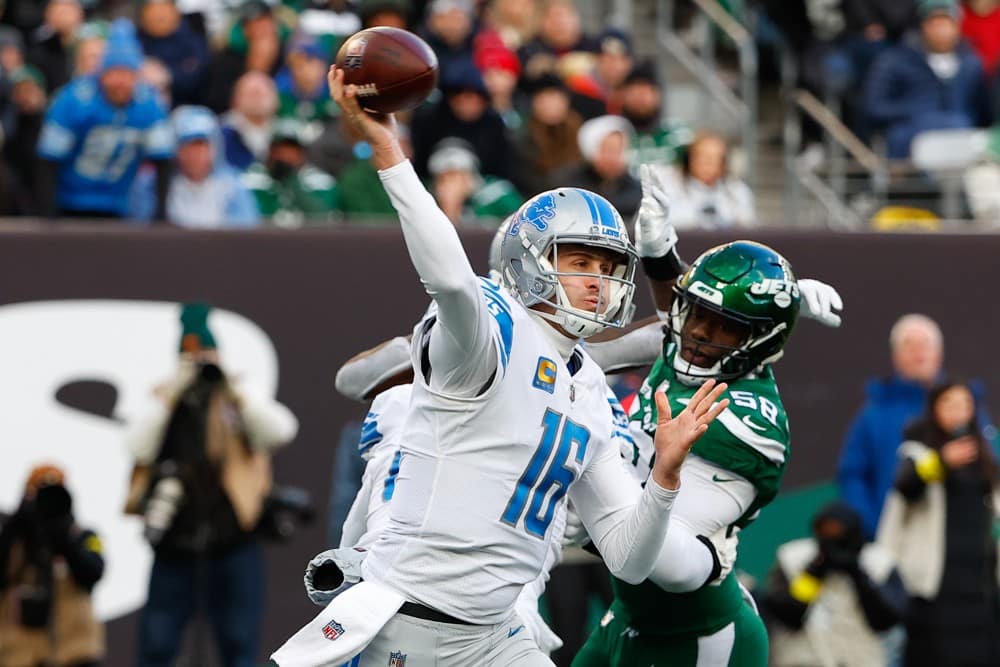 Welcome to the Sports Gambling Podcast Network’s Top 10 NFL Week 17 DFS Stacks article! Each week of the NFL season, I break down the DraftKings main slate to bring you the top 10 DFS stacks.

Each week the stacks in the top 10 will include a variety of these stacks based on the scoring upside and likelihood of appearing in an optimal DFS lineup and above the pay line. Let’s dive into the Top 10 NFL Week 17 DFS Stacks.

There will be a lot more fantasy football championship teams with Jared Goff at QB than anyone could have imagined before the season started. It is obvious that more people will stack Goff with his top weapon Amon-Ra St. Brown, but the gap between the Sun God and the other weapons in Detroit has narrowed considerably in the second half of the season.

DJ Chark has had me reminiscing about his rookie season in Jacksonville, where he was a dominant vertical boundary receiver.

On the flip side, one could easily stack the Bears and Lions with more blunt honesty. Justin Fields has been every bit the blue-chip QB for fantasy, as we expected him to be coming out of Ohio State. I don’t love most of his receivers, but the run-heavy Bears make the less-common QB-RB stack more palatable.

I prefer RB-1B Khalil Herbert over David Montgomery at cost. He has more big-play potential and costs thousands less to roster on DraftKings. Amon-Ra St. Brown is a volume monster who has been eerily quiet recently. Maybe he was waiting for another date with the Bears to go off again since he scored 25.1 points against them in Week 10.

If this game were taking place in Minneapolis, I’d be more inclined to stack it more heavily. Since it will be on the frozen tundra of Lambeau Field, I find it more appropriate to skinny stack.

Dalvin Cook is primed for a huge game against a very vulnerable Packers run defense. They will have to key on Justin Jefferson to keep the game close, leaving Cook more room to run with lightboxes.

Christian Watson is a strong play if he is active with a hip injury, but I want to attack this terrible Vikings secondary vertically. Romeo Doubs has been remarkably reliable for a rookie when he has been healthy. His work on the boundary and in the red zone will help Aaron Rodgers immensely if this game turns into a shootout.

Green Bay might be the team best equipped to slow down Justin Jefferson. Their secondary is well-coached and communicates zone assignments remarkably well, but they did allow Jefferson to put up a season-high 42.4 points in Week 1. The superstar WR is only 209 receiving yards from breaking Calvin Johnson‘s record, so Minnesota will undoubtedly target him early and often.

AJ Dillon has seized the Packers’ backfield in the second half of the season, both with the colder weather and nagging injuries to Aaron Jones. The Vikings have an atrocious pass defense, but their comparatively strong run defense is still only 21st at defending the RB position. I will be riding with Quadzilla in hopes that his momentum will continue to build this week at a bargain salary.

While you were sleeping, the terrible Atlanta Falcons made a change at RB. The rookie Tyler Allgeier not only earned twice as many touches as Cordarrelle Patterson last week but also was targeted a season-high four times in the passing game. Arizona has mailed in the rest of this disastrous season and has been a sieve against the run. Atlanta seemingly only runs the ball, creating a smash opportunity for Allgeier.

Trace McSorley‘s one-week moonlighting gig was an abject disaster for Deandre Hopkins, who hauled in just one reception on ten targets for four measly yards. Colt McCoy is back from concussion protocol and has been known to hyper-target Nuk with a much higher success rate. Atlanta’s defense is among the worst in the league, so Hopkins is back on my WR1 radar this week.

From football arsenic to the elixir, Mike White is back as the starting QB for the Jets. Zach Wilson was multitudes more toxic to the offense than his team’s fanbase was to him.

White provides a fantasy upgrade for every single skill player on the team. Bam Knight was averaging double digits with White under center but had consecutive 2.3-point games (in great matchups) behind Wilson.

Garrett Wilson’s splits were less volatile as the team’s alpha receiver, but the 20-point upside the talented rookie showed early in the season completely evaporated with the Mormon Ken doll back there. He is one of my favorite WRs to maximize value at a leveraged ownership rate.

I completely nailed the game script a few weeks ago when the Broncos and Chiefs met. Russell Wilson had his best game of the season and tossed three touchdown passes before leaving with an injury. His top WR, Jerry Jeudy, scored two touchdowns from Wilson and a third from backup Brett Rypien.

The Chiefs won the game but needed a shootout to overcome their defensive inadequacies. Nathaniel Hackett has been shown the door, opening up a chance for Denver to prove they were held back by coaching incompetence.

Wilson to Jeudy might not pay off as well as last time, but I like how sneaky this stack is on a 13-game main slate. Travis Kelce is always in the player pool when on the DFS main slate and correlates well here, even if not necessary to include him as part of a stack.

One of the stories I wrote in the preseason had to do with an impending resurgence for George Kittle now that Jimmy Garoppolo was no longer the starting QB. We never got to see the full potential of the Trey Lance connection before Kittle’s bane was pressed into action again.

Fast forward to Brock Purdy’s trial by fire, and it reminds me of 2018 when Nick Mullens and CJ Beathard combined to unleash George Kittle’s murderous wrath upon the league. The 49ers’ defense will be chalky beyond recognition, but it correlates well to the unholy beatdown I expect in Las Vegas.

This disgusting stack is brought to you by sleep deprivation. Mac Jones has looked lost this season, but the blame falls squarely on Matt Patricia’s gelatinous shoulders. This offensive system and weekly game plans have been unfathomably tragic. Still, the price is right, and the matchup with Miami is a choice.

Jakobi Meyers is the most skilled WR in New England, but I also like Kendrick Bourne‘s recent resurgence.

Teddy Bridgewater gets the nod over the thrice-concussed Tua Tagovailoa at Foxborough. I imagine the Patriots will have better field position and, thus, more scoring opportunities this time around. Tyreek Hill was targeted 12 times in Miami’s Week 1 meeting with the Pats and will need to be his usual effervescent self to return value at his salary.

This week is the “Super Bowl” for season-long fantasy, so why not play the GOAT? DFS is the antithesis of waiting until January to get paid for fantasy exploits, but points are points.

Something tells me that Tom Brady will not quiver against the Panthers with the NFC South title on the line. Jaycee Horn broke his wrist last week, leaving this already-thin secondary even more vulnerable.

The Panthers have a great pass rush with Brian Burns & Co. so Brady will rely on quick-releasing patterns to the middle of the field. This introduces the deadly slot duo of Chris Godwin and Russell Gage to many volumes. At their salaries, this equates to winning.