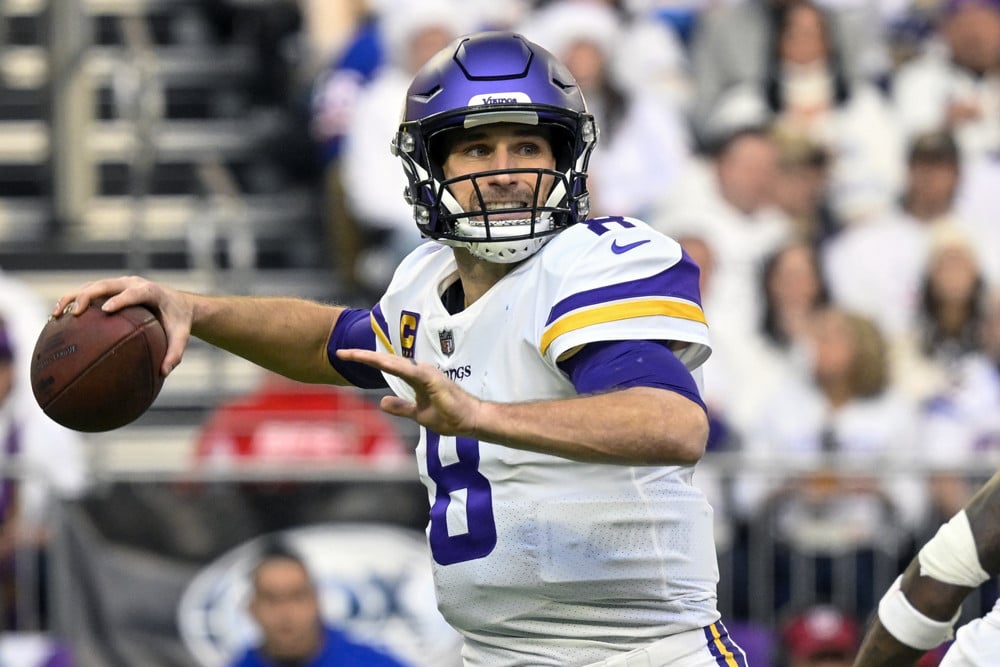 Here we are in Championship week. Identifying our fantasy championship sit candidates is sometimes a difficult pill to swallow. We have helped over the last few weeks. Our takes were to help you, as fantasy football owners, identify surprising sit decisions for the fantasy football playoffs. Here is a quick rundown of how we’ve done:

For the second time, Keenan Allen has destroyed my takes. Guess I should stop betting against him. Besides him, our takes are pretty solid, with no one giving you the boom week that we had started to get used to.

So how about we do it again? What are some surprise decisions to make in the championship week of the fantasy playoffs? Now it is win or be the first loser. What is it Ricky Bobby says, “if you ain’t first, you’re last!” Let’s make sure you’re first.

QB10 in Fantasy Points per Game

Kirk Cousins has just done Kirk Cousins things this year. By that, I mean he’s been a QB1 that is startable every week but gets no respect. I say that, getting ready to disrespect him. We have seen a shift in Cousins this year from a split perspective. In general, he has been pretty even between home vs. road and indoor vs. outdoor. This year is different. Here is what we are looking at:

These are pretty telling to me. He is not the same QB this year outdoors on the road, and guess what is happening this week? He is away outdoors at Lambeau Field against a decent passing defense in GB, who has the 8th-best ranking against the QB position in the last four weeks. I would look to sit in single QB leagues and lower expectations in Superflex.

RB10 in Fantasy Points per Game

Don’t fall for it! Fournette had an RB3 overall week last week against the Arizona Cardinals, but this week is different. I know they get Ryan Jensen back possibly this week, but that’s not going to be enough to get this Tampa Bay offense rolling. They will play the Carolina Panthers, who have allowed a whopping 197 yards to the running back over the last four weeks.

So I can hear you already, “but Brad, he has receiving upside!” Well, Carolina has also allowed a league-leading low of 7 catches to the RB position in that same span.

That has involved some good pass-catching RBs in Kenneth Walker, Najee Harris, and the combo of Jamaal Williams and D’Andre Swift. I’m fading Fournette hard this week and will start players like Cam Akers over him with a favorable matchup against the Chargers.

RB6 in Fantasy Points per Game

Joe Mixon is on pace for the most targets of his career, and he has missed two games this season. He has performed very well, as evidenced by his eight top-20 RB finishes this season.

He does provide a safe floor because of those targets, but I worry about the offensive line vs. defensive line matchup in your championship week. The loss of Collins at the starting tackle position is a killer for them. He is their best run-blocking offensive lineman and sets the edge for Mixon.

Looking at NFL Next Gen Stats, he has a lot of big runs off the left side of the line. Couple that with the fact that his yards after contact have diminished from the norm for him, and they are going against Buffalo, who leads the league in yards before contact as a defense at .86 yards. Just a recipe for disaster, in my opinion. I would look at starting guys like Dobbins and Brian Robinson over him this week.

WR6 In Fantasy Points per Game

I truly believe that Davante Adams is a top 2 WR talent in the league, with the only arguably better player being Justin Jefferson. While I understand this may be tough to swallow, I would be looking to bench him in all situations.

If you are in the finals with him, you must have a loaded team, as he has been WR37, WR64, and WR82 over the last three weeks. Now he is up against the 49ers with Jarrett Stidham as the starter. I’ll keep my thoughts about Josh McDaniels to myself, but I’m guessing you know what they are.

WR25 in Fantasy Points per Game

I worry that people may see the targets that Pittman is getting and feel safe plugging him into your championship lineup. While he is the overall WR25 in fantasy, he has only finished as a WR2 3 times in the entire season.

While he does have a favorable matchup against the outside corners in New York, he still has Nick Foles at the QB position, a first-time head coach, and no Jonathan Taylor. We saw how anemic the offense was last week, and I expect more of the same. I just see a situation where the floor is crazy low, and his ceiling is a WR2. Not worth the risk to me.