Early 2023 US Open Picks and Preview 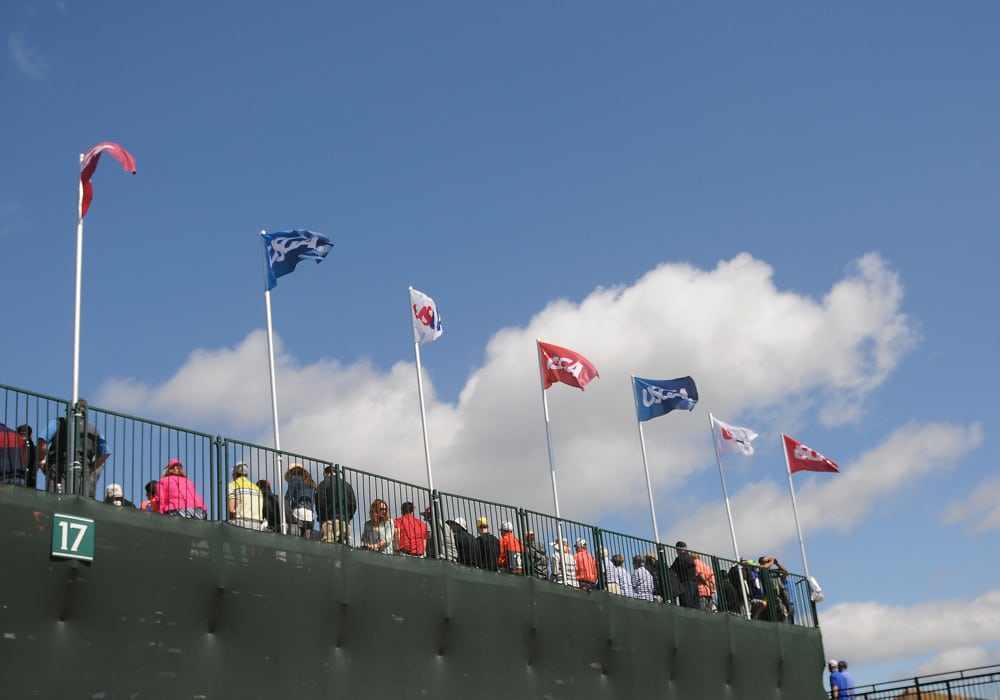 It’s never too early to start preparing to make picks for the 2023 US Open. December presents an opportunity to get great closing line value on a player months in advance.

Here’s an early preview for the 2023 US Open and early picks to win.

The club was one of the original homes to the Los Angeles Open (more commonly known now as the Genesis Invitational). It also hosted the 1930 US Women’s Amateur and the 1954 US Junior Amateur. But between 1954 and 2017, the club hosted no professional or USGA events. The Los Angeles Country Club is one of the most (if not the most) exclusive country clubs in the United States. For years, the members were very hesitant to bring a major tournament to its club, unwilling to allow the public to enter through the pearly white gates.

Few didn’t know it at the time, but the 2017 Walker Cup would prove to feature one of the most decorated teams in its history. Leading the United States side was Scottie Scheffler, Collin Morikawa and Will Zalatoris. Also on the team were PGA Tour stars Maverick McNealy, Cameron Champ, Doug Ghim and Doc Redman. Norman Xiong and Braden Thornberry, two collegiate studs who haven’t quite lived up to expectations, also were on the team. As was the team’s oldest player, Stewart Hagestad, who has competed in several Masters and U.S Opens before.

The USGA has the full broadcast of Sunday Singles from that event, which you can watch here. I recommend everyone watch the broadcast, as it is the best piece of evidence of what to expect at Los Angeles Country Club. Otherwise, there is very little on the internet about what to expect from the golf course.

But for those who want the cliff notes version, check out the highlights on YouTube below.

How would I describe Los Angeles Country Club? For starters, Los Angeles Country Club features bermudagrass tee-to-green. The greens, however, are bentgrass. It has the dramatic elevation changes and land movement of a place like Augusta National or Southern Hills. The turf, particularly when they play the US Open in June, has the cement-like firmness of that of Shinnecock Hills. Tee shots will fly down the fairway. And they’ll take huge hops onto the putting surface like a ping-pong ball on pavement.

It also has the rugged, natural look of a Pine Valley. It also has barranca like at Riviera (also a George Thomas design). And there are tight lie collection areas to repel poor approach shots away from the green, like an Augusta National, Southern Hills or Shinnecock Hills. But it also features some of the thickest bermuda rough I’ve ever seen. Like if Oakmont replaced its Kentucky Bluegrass rough with bermuda.

In summary – Los Angeles Country Club more than meets the criteria of a championship-level golf course.

The golf course overall looks generous off the tee with wide landing zones. However, given how firm the fairways are and how some of them are sloped, players might have a difficult time keeping the ball in the short grass on a few holes. And as mentioned earlier, the greens will be very firm for the US Open. Southern California receives very little rain by the time June rolls around.

But what stood out to me the most was how difficult the greens and the greenside surrounds are, particularly the bunkers. The greens are lightning quick and significantly undulated. Players at the 2017 Walker Cup were having a very difficult time reading them, even on short to medium size putts. And several players ran their putts well past the hole, leaving themselves with uncomfortable five and six foot comebackers.

The players also seemed to have trouble getting up and down out of the bunkers. Not only were they set well below the putting surface, the sand gave the players fits too. The broadcast made mention that there wasn’t a lot of sand in the bunkers, making it difficult for them to control trajectory and spin out of them. Players had a very tough time getting anything close to the pin out of a bunker.

And given how firm the greens are, any ball coming out of the rough had very little chance of holding greens, let alone getting anything close to the pin. Balls had almost no spin coming out of the thick rough both on approach shots and off the green.

Lastly, here was the scorecard used for the 2017 Walker Cup: 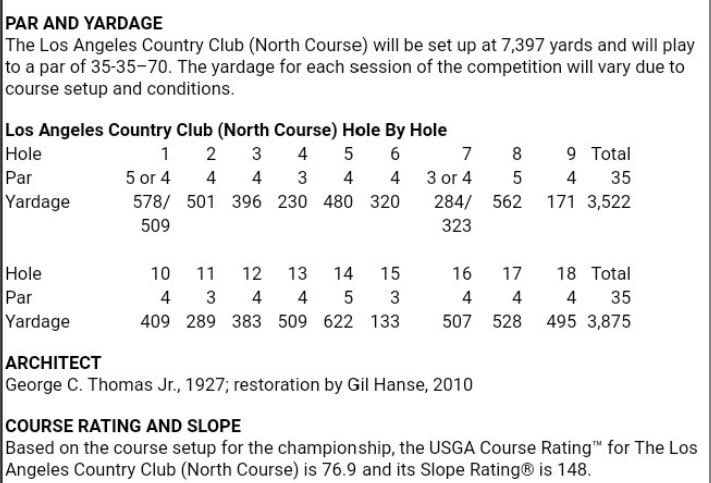 The 2017 Walker Cup played just a fraction under 7,400 yards. The limitations of the property line won’t allow the USGA to stretch the golf course much further than that. Expect similar yardages for the 2023 US Open.

There is much discussion and question about which LIV players will be eligible to compete in the 2023 majors. As of today, here are the LIV players who have received an official exemption in to the 2023 US Open, with how they qualified in parenthesis:

It’s expected that several high profile LIV players will have the ability to qualify for the US Open. However, they may have to do it through local and sectional qualifying.

Admittedly, I’m still digesting my official handicap of the golf course. I’ll probably watch the Sunday Singles of the 2017 Walker Cup a few more times over the next few months before I make my official assessment.

But as of today, my initial lean is that the importance of premier ball-striking tee-to-green will be significantly magnified at the 2023 US Open. That’s not exactly out of the norm for most US Opens in general. But given how penal the greenside surrounds are at Los Angeles Country Club, missing greens will carry a significant penalty. It will be difficult to get up and down from some of the places off the green for even the most elite scramblers. The players who will hit the most greens at Los Angeles Country Club will separate themselves from the rest.

I also don’t think you need to be a bomber to do well at the Los Angeles Country Club. While I anticipate there being plenty of long approach shots, the firm conditions of the fairway should give a distance assist to those who don’t have elite length off the tee. That won’t put them behind the 8-Ball as much as it would at a golf course without rollout (like at Oak Hill for the PGA Championship).

That’s not to say longer hitters don’t hold an edge. They always hold an edge regardless of golf course. The ability to be able to hit a higher lofted club into such a firm green has its advantages. And there’s not a ton of opportunities to bounce a ball up to the green, as many are only accessible via the air. But there are several shorter players off-the-tee who also excel with their long approach shots that shouldn’t be ignored.

The greens itself also might make it a bit of a crapshoot. These appear to be very difficult greens to putt on. As mentioned earlier, players had a lot of trouble with both reading the correct line and speed control. Most putts have significant break to them where it seems like a guess of if a player has picked the correct line. The difficult nature of the greens may not allow an elite putter to separate himself materially from a poor one.

It should be noted that while there were a ton of great players who played in the 2017 Walker Cup, it’s important to keep in mind that they are amateurs. Their games aren’t nearly refined as they are today, particularly with their short game and putting. So their struggles in those areas may very well be explained because of that.

But overall, I plan on targeting elite ball-striking for the 2023 US Open, while neglecting things like short game and putting. Those two areas seem to be pretty unpredictable as far as who will and won’t do well at Los Angeles Country Club. The 2023 US Open could very well could breed a champion who typically excels tee-to-green, but struggles putting.

The obvious reason to pick Collin Morikawa is due to his success in the 2017 Walker Cup. Morikawa went 4-0 at the 2017 Walker Cup, including an 8&7 beatdown in foursomes with his partner Norman Xiong against Harry Ellis and Alfie Plant. And given his California ties, he’ll be a popular pick for those who buy into the narratives.

But he also fits exactly the profile of player that I described above. He is an elite ball-striker who can struggle with his putting. Like Will Zalatoris, however, some of Morikawa’s best putting performances have come on fast, difficult championship-level greens. Examples of this include Muirfield Village, The Concession Golf Club, Riviera and Brookline.

This could be explained that Morikawa puts himself in situations on the greens that reduce his chances of three putting. Whereas the field who doesn’t hit it as close as he does run a higher risk of doing so and losing strokes to the field. Regardless of whatever the reason is, Morikawa’s exceptional ball-striking should enable him to separate himself from the field at Los Angeles Country Club. He’s my early pick to win the 2023 US Open.

Jon Rahm possesses the talent to win at the Los Angeles Country Club. I just don’t think he has the temperament for it. I can envision him slamming his putter head with his fist several times after missing a few short to mid-length putts. Rahm is also the type to mutter expletives after a ball takes a bad hop and bounds down into a collection area. I see him whining about a bad lie in the bermuda. And I can absolutely envision him complaining to his caddie about the sand in the bunkers.

All in all, I think Jon Rahm will be his own worst enemy at the difficulties he’ll face at the Los Angeles Country Club. And I don’t think he’ll be able to keep his cool for 72 holes to win the tournament. He’ll probably be a popular pick to win the 2023 US Open. But he won’t be mine.