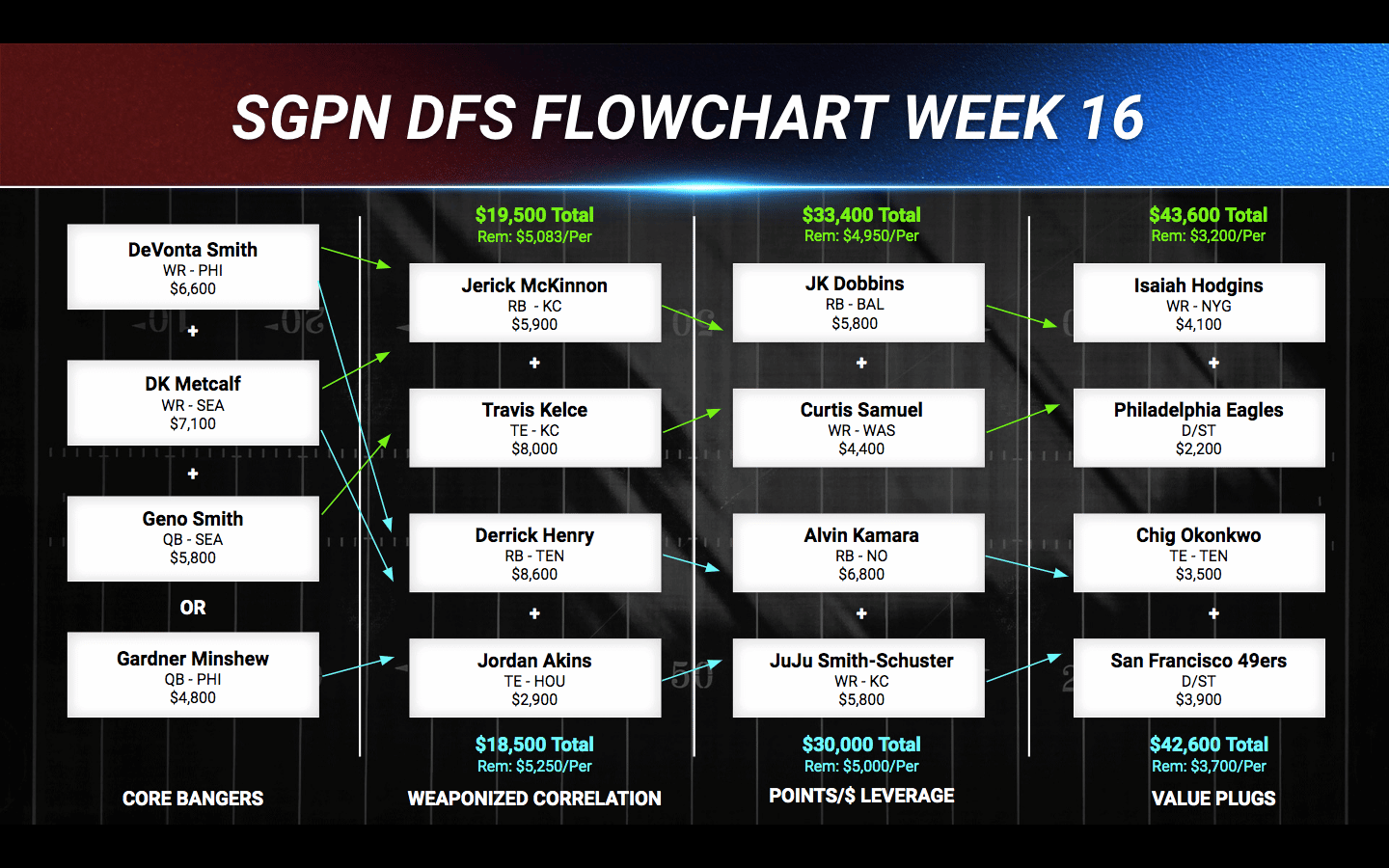 Except for identifying a couple of breakout performances like Jerick McKinnon, last week was rough. After my best main slate in years, Week 15 took my lunch money. As I’ve said all season, DFS managers must be like closers in baseball. Stay on an even keel and have a short memory, or the game will chew you up and spit you out.

The Christmas weekend is very unique, in that the main slate lays out 10 games on Saturday. Christmas Eve is oozing with good tidings, eggnog, and football in inclement weather. Some of the lowest implied totals in years are littered about the eastern seaboard this weekend. Vegas loves to overreact to bad weather games, leaving soft lines to exploit. The outdoor games this week, however, will be graced with sub-zero temps and gale-force winds from the “polar vortex.” Needless to say, Rudolph better sober up because he will be getting the call.

The Week 16 NFL Flowchart is a visual representation of my lineup-building thought process. It is condensed into two diverging paths for the sake of digestibility and protecting you all from knowing just how incredibly loony I am. Here are some of my core thoughts for Week 16 on DraftKings.

Everyone knows that Gardner Minshew is making his first start this season in place of the injured Jalen Hurts. He is also priced like a backup QB. Dallas is nursing a bunch of injuries in the secondary and will have its work cut out to slow down the likes of AJ Brown and DeVonta Smith. Dallas Goedert is also back in the fold this week for Philly and usually saves his best work for when he faces the Cowboys. Minshew will be plenty popular, but will also need to be very bad to fall short of value at his salary.

Geno Smith is too cheap this week. The disrespect is real at $5.8k against one of the most exploitable pass defenses. Not many are giving the Seahawks much of a chance at Arrowhead, but I believe they will be able to score with them and cover the 10-point spread. Steve Spagnuolo’s Chiefs defense loves to blitz and maroon the corners on an island. This has historically backfired against the likes of DK Metcalf, who is one of my most ardent core plays in my Week 16 NFL flowchart.

Shootout on the Frigid Plains

Yes, you should play Travis Kelce if you can fit him in under the salary cap. Seattle is second-worst in the NFL at defending the TE position. The weather in Kansas City will be frigid and blustery, likely keeping the passing game closer to the vest. I also love fitting last week’s hero Jerick McKinnon into a double stack. In fact, stack as many varieties of this game as possible. A lot of the heavy chalk is on the Vikings-Giants game, which is indoors. I’d rather load up on a sure thing with less fanfare.

The Titans are hosting the one-win Texans in Nashville. It will be, you guessed it, sub-freezing there too. Derrick Henry has had some of his best performances versus Houston, who still sports the league’s worst run defense. Tennessee receiving options worth rostering in DFS will be very limited with Malik Willis starting at QB. I look to Davis Mills‘ favorite guy lately, TE Jordan Akins as a runback. He is cheap and worth a dart throw.

Baltimore is another city hosting a game with dreadful weather in the forecast. The Ravens should have absolutely no difficulty bludgeoning the hapless Falcons, who have jettisoned QB Marcus Mariota for mercurial rookie Desmond Ridder. The running game is the only arrow in Arthur Smith’s quiver, but the Ravens have been elite in that department since acquiring Roquan Smith from the Bears. JK Dobbins is lined up for a third-consecutive 100-yard game against a dreadfully soft Falcons defense. He should get plenty of work in the frozen Charm City.

Many fantasy experts are advising against rostering skill players in the Browns-Saints game. The implied total is 31.5, which is the lowest in any regular season game in 14 years. Both of these teams will be bound to the ground on the banks of Lake Erie, where the tempestuous winds will freeze the fuel in the sideline heaters. Nick Chubb is a fantastic play in DFS with hardly any projected ownership. Where I can’t quite fit him in under the cap, I’ll pivot to Alvin Kamara for $900 less in a plush matchup with abysmal Browns run defense.

The Airing of Grievances

I have narrowed my pool into two defenses. The 49ers will have pleasant weather in Santa Clara on Saturday and will wreak havoc on Taylor Heinicke and the Commanders. I will have them as a high-priced standalone leverage play and also stacked with Christian McCaffrey as a correlation. The Eagles still have a stellar defense and average nearly 10 fantasy points per game. They get the Cowboys on the road this week, who score a lot of points. Dallas has also been extremely turnover-prone lately and the Philly DST is shockingly only $2.2k.

I don’t want to completely fade the chalk fest in Minneapolis. Saquon Barkley and Justin Jefferson are in play, of course. I also have a sneaking suspicion and aching gut about Isaiah Hodgins taking this pitiful Vikings secondary to the woodshed. Daniel Jones is too chalky for my liking, but Hodgins and Richie James are good values at WR on this slate. I can’t get enough of Chig Okonkwo. As long as he keeps hitting at least a 3x value, I will accept the direct deposit into my PayPal. Malik Willis will enjoy a security blanket and YAC monster off that lethal Derrick Henry play action.

Thanks for checking out this Week 16 NFL flowchart presented by the Sports Gambling Podcast Network. Check back with SGPN daily for more fantasy football content.