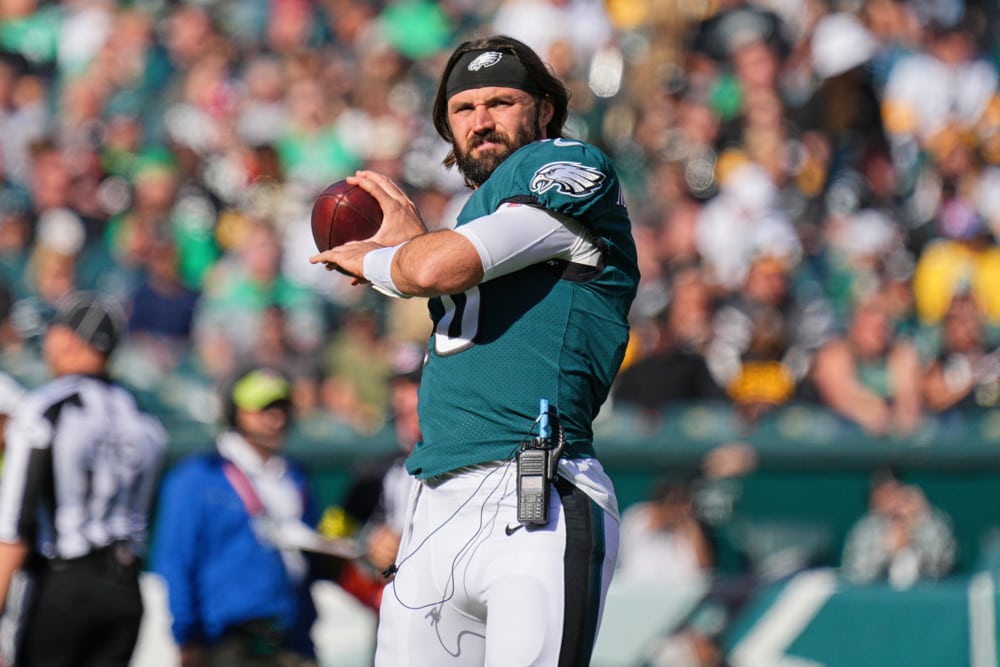 Welcome to the Sports Gambling Podcast Network’s Top 10 NFL Week 16 DFS Stacks article! Each week of the NFL season, I break down the DraftKings main slate to bring you the top 10 DFS stacks. This week’s featured main slate is ten games on Saturday, December 24. The three games on Christmas Day are not included in this DraftKings player pool.

Each week the stacks in the top 10 will include a variety of these stacks based on the scoring upside and likelihood of appearing in an optimal DFS lineup and above the pay line. Let’s dive into the Top 10 NFL Week 16 DFS Stacks.

Minshew Mania is back…and it will be chalky. The Cowboys’ secondary is depleted with injuries, leaving the best WR duo in the NFC to run roughshod over the struggling unit.

Minshew will score fantasy points and easily return value at his salary. In order to lessen the effects of the chalk, a double stack is warranted. It also increases correlative upside in a game that figures to have ample scoring on both sides.

Another consideration is Dallas Goedert, who is returning from the IR for Saturday’s game and always plays great against Dallas.

So you say you want to avoid the Minshew Mania chalk? Look no further than Miles Sanders, who will be a wonderfully leveraged play at a bargain.

The Cowboys have been tough against opposing RBs, save for a couple of games in the middle of the season. That little red number that signifies a tougher matchup will scare a lot of DFS managers away from Sanders.

He scored 14.2 points against them when these two teams met in Week 6.

Sometimes a stack has so much upside that you shouldn’t hesitate to eat some chalk with it. Geno Smith is getting all the shade on the heels of his first Pro Bowl nod with this egregiously low DraftKings salary. The Chiefs have been awful in pass defense, and the weather won’t be bad enough to cover that up.

Kansas City loves to blitz and run Cover-1 behind it, leaving their inexperienced CBs isolated in man coverage. DK Metcalf has annihilated man coverage his entire career and won’t have Tyler Lockett to contend with the lion’s share of targets.

Travis Kelce returned to form last week after a couple of underwhelming games. He now faces the second-worst defense in the NFL at defending the TE position. He is very chalky and expensive, but you should definitely build around him as a foundational stacking piece.

I believe most DFS sharps will gravitate to Geno Smith in this game, leaving one of the game’s best QBs as a suspicious leverage play. He is very expensive, putting a prohibitive burden on lineup construction around him.

I propose stacking Patrick Mahomes with some value options that won’t get the same fanfare as Kelce and Metcalf. JuJu Smith-Schuster is quietly having a decent contract year, while Jerick McKinnon continues to impress in his custom-catered role in Andy Reid‘s offense. This game will have fireworks, so stack accordingly.

The trendy plays are the trendy plays for a reason. I added a little wrinkle here to the tried-and-true Mahomes-Kelce stack. Noah Fant is nursing a knee injury and is still carrying a questionable designation for Saturday’s game.

What better way to get a little funky with leverage than to go with dueling TEs in the same DFS lineup? Will Dissly is coming in at a cool $2.7k on DraftKings and will likely see increased work as the TE1 for Seattle, even if Fant is active.

I shouldn’t need to try too hard to convince you that Patrick Mahomes and Travis Kelce are great plays against a terrible Seahawks defense. We’re just looking for that one play that can make a great lineup perfectly optimal under the cap.

My buddy Mike Collins has taken all the guesswork out of the QB position for DFS with his unique strategy. He locks in one QB for all of his 150 lineups each week. Earlier in the season, it was Justin Fields. Other times, it has been Joe Burrow.

This dude keeps beating me in our weekly high-score contest because every single one of his lineups has had a great QB performance and all he has to do is plug different skill players from his pool around it. He has revealed that his lock at QB this week is Burrow again.

I won’t be outdone this week. Burrow is likely to be low-owned and severely underpriced at $7k. He is the QB4 in fantasy points per game, yet has never been more than $7k this season on DraftKings. He is more than $1k less than all of the other top options at the position.

Stacking him with the amazing Ja’Marr Chase is too easy. The Patriots like to man up on the outside and run mixed coverage schemes. Burrow and Chase will be licking their chops. 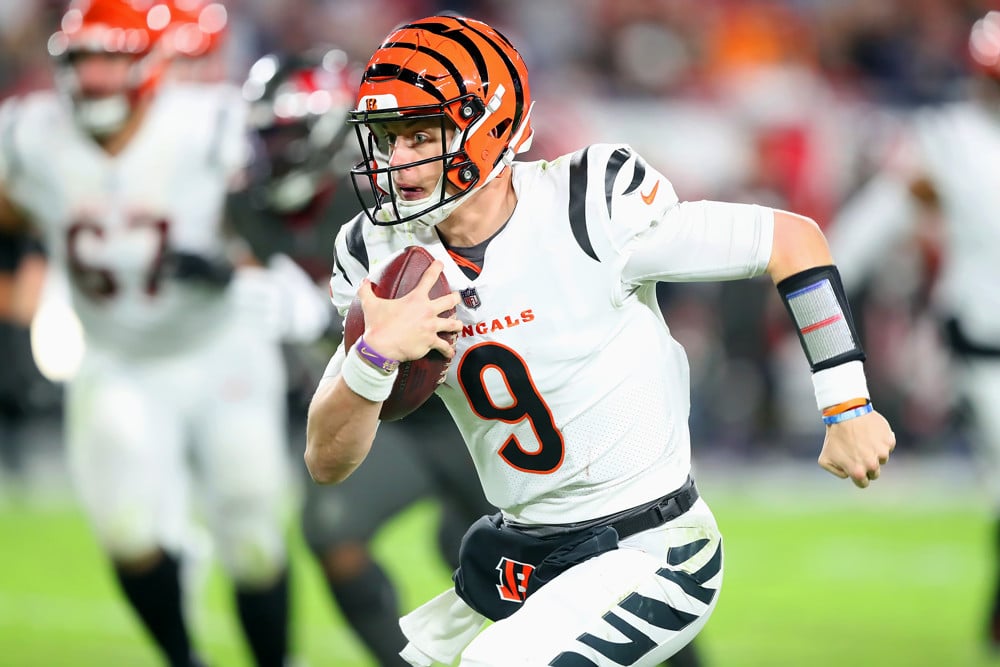 This is a “bad matchup” for the 49ers and their lethal running game. The Commanders are 4th at defending the RB position, and Christian McCaffrey will be less than a week removed from toting over 90% of the RB carries against the Seahawks.

I’d say that’s perfect. CMC is averaging 29.9 DraftKings points over his last three games. He is $8,800 and highly unlikely to come through as chalky, especially with Derrick Henry getting the Texans this week at a lower salary. Build around him. CMC is this offense at present.

He is no more an RB than a WR or gadget back. He will absolutely barbecue this Washington defense through the air and also command respect in the running game.

Pairing CMC with this vaunted 49ers defense is the type of correlation that will go overlooked by many. I have zero faith in Taylor Heinicke moving the ball and scoring points on the best defense in the NFL. I also expect the Commanders’ offense to be coerced into multiple turnovers and maybe a touchdown. The Niners DST is worth every penny toward the top of the scale this week.

Are your favorite players coming off a bad game? Did they let you down immensely in the fantasy playoffs? Don’t fret. All you need is for the Atlanta Falcons to appear on the schedule. I

am plugging in Tyler Huntley since Lamar Jackson has not yet practiced this week, but would certainly play Jackson if he was active. The Falcons’ defense stinks. Mark Andrews is a smash value at the TE position, where matchup matters more than at any other position.

His upside is just as high as Travis Kelce and a very many WRs to the top of the board as a flex play. Huntley’s mobility gives him a very safe floor this week to hit value at the bottom of the QB scale. The Ravens will win big in this one.

How might one go about fitting Justin Jefferson into a lineup with one or two other high-priced studs? You play a cheap correlating game stack and use him as a runback. The Vikings are horrendous in pass coverage and will be a liability for them heading into the playoffs.

They will have to try to slow down Saquon Barkley while also accounting for Daniel Jones and his no-name corps of receivers. I will have Darius Slayton and Richie James in my player pool, but I am really going to be heavily exposed to Isaiah Hodgins.

His matchup rating this week is stellar and provides valuable access to premium players like Jefferson. Jefferson is hurtling toward the first 2,000-yard season for a WR in NFL history, and the Giants are merely speed bumps along the way.

Similar to going after Justin Jefferson is how to build around an expensive (and chalky) Derrick Henry on this 10-game slate. The Texans have had no answers for King Henry over the years, and this week will be no different. The key to an optimal lineup that includes him is to get different.

Davis Mills has had a letdown sophomore season but has come alive the last two weeks as a passer. The Titans have one of the worst defensive backfields in the NFL and have really been giving it up through the air. Where I can play pin the tail on the stackable WR to go with Mills, I’d rather go dirt cheap at TE with one of his favorite targets in Jordan Akins.

This leaves me room for Henry (and others) while creating a unique game stack that offers some juicy upside if the game script goes as expected.