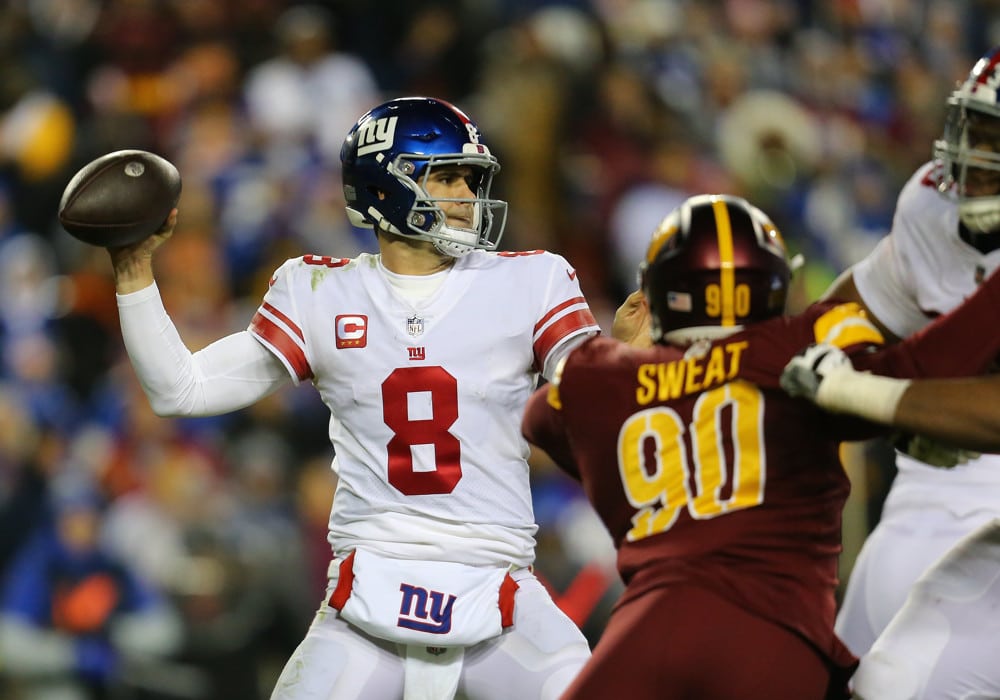 Hello everyone and welcome to another Week 16 Fantasy Football Streaming Options article presented by the Sports Gambling Podcast Network. If you’re still reading articles this late into December chances are you’re getting into the money rounds of your fantasy football playoffs. Congratulations and good luck to you in these final couple of weeks.

The fantasy season has flown by once again and it has certainly been a battle of attrition with injuries beginning to pile up. With two weeks to go anything can happen though and even the loss of Jonathan Taylor isn’t going to take anyone out of contention. Keeping that in mind here are some of my favorite widely available Week 16 fantasy football streaming options for those in semifinal matchups.

Daniel Jones has gotten a lot of grief for his decision making over the years but he is the QB11 for fantasy in 2022. Some of that has to do with being healthy every game, but he’s been far more consistent than he has been in the past as well. He’s finished as a mid-tier QB2 more weeks than not and has managed to cut down on the turnovers. Furthermore, this week he gets the Minnesota Vikings who rank 28th in fantasy points given up to the Quarterback position. This is a team that has given up over 300 yards passing to Mac Jones, Mike White, and Jared Goff recently too.

Jones will rank as a borderline top 15 option for me this week despite a depleted Wide Receiver core. He will likely be able to find some room on the ground as well with a high likelihood of a rushing touchdown.

The wheels have yet to fall off for the last pick in this most recent NFL draft and Brock Purdy has performed admirably in recent weeks. He’s been a top 18 Quarterback in all three of the games he’s played including a QB8 finish in Week 14 against the Buccaneers. He’s a game manager with no rushing upside but given the weapons in this offense, he just needs to get the ball in his playmaker’s hands.

If he does that and limits his turnovers as he has been he can continue to operate as a high end QB2 in these final couple of matchups. While the Commanders have a good defense, they aren’t overly tough on Quarterbacks ranking just 15th in the league in terms of fantasy points. I’ll likely slot Purdy right behind Jones in my rankings as another borderline top-15 option.

Tyler Allgeier has been getting a consistent workload all season but finally had a breakout game. He rushed the ball 17 times for 139 yards and a touchdown and is beginning to take more and more work from Cordarrelle Patterson. They essentially split the snaps 50/50 in Week 15, and Allgeier was far more efficient. As the Falcons look toward the future, we could see them turn this backfield over to Allgeier in these final few weeks so they can see what they have in the young Running Back.

While the offense will make him a volatile starting option in Week 16, there isn’t another widely available back I would feel comfortable starting in my flex. The Ravens rank 6th against opposing fantasy Running Backs as well so you are likely hoping Allgeier is able to fall in the endzone. Regardless, two weeks from the fantasy football championship there won’t be any reliable players left on the waiver wire.

Jonathan Taylor suffered a high ankle sprain and will likely miss the remainder of the 2022 season. Nursing a gigantic lead they eventually lost, the Colts ran the ball a ton after Taylor’s departure from the game. Both Deon Jackson and Zack Moss received considerable work with Moss actually leading the backfield in touches 24 to 13. Deon Jackson was more efficient though and caught the lone reception between the two.

I don’t think we will see this many opportunities for these two backs next week against the Chargers either. The Colts will likely be playing from behind which actually could favor Deon Jackson despite the lopsided workload this past week. I’ll be leaning toward starting Jackson in fantasy lineups unless the coaching staff makes an announcement that Moss will lead the way. Either way, it will be tough to trust either as more than upside RB3s, albeit in a soft matchup.

After a hot start to the season, Jahan Dotson’s season was derailed by a hamstring injury that caused him to miss five games. It took him a while to get his feet back underneath him, but he’s been very impressive the last two games. In that span, he’s caught 9 passes for 59 yards and two touchdowns. This included a 100 yard performance this past weekend and a top 10 Wide Receiver finish.

While the Commanders rely heavily on Terry Mclaurin and Curtis Samuel still, Dotson has gotten the second most targets the last two weeks. Samuel is deployed in the run game in a Deebo Samuel type role and their opponent, the 49ers, are 20th in fantasy points given up to the Wide Receiver position. Dotson will be a flex option this week with a high ceiling but a low floor as well due to the state of the offense. If the 49ersass rush is able to get to Taylor Heinicke it could be a rough day for him.

Marquise Goodwin is set to take over the number two receiver role for the Seattle Seahawks after Tyler Lockett suffered a fractured finger. There’s a chance he only misses one game, but he won’t be returning in Week 16. That leaves Goodwin set for an increase in targets in a great matchup against Kansas City. The Chiefs have been burned by opposing Wide Receivers all year and he will likely rank as a top 36 Wide Receiver when I update my rankings on Tuesday.

This is a player who’s scored double digit PPR points in three of the last four games he’s played over 50% of the snaps. This includes two top 10 WR performances, one coming just two weeks ago against the Carolina Panthers. Particularly in leagues with multiple flex positions, Goodwin should be a safe start.

After missing a game due to injury and having a bye week, Juwan Johnson got right back to it catching two touchdown passes this past week to go along with 67 yards. He’s simply been a touchdown machine when healthy and is clearly Dalton’s favorite target in the red zone. If you don’t have a top eight Tight End in your lineup, you’re essentially chasing touchdowns anyway. You could do much worse than the player who’s scored seven touchdowns in his past five games.

Noah Fant has finished as a TE1 in two of the last three weeks scoring a touchdown in each of those games. He also received 11 targets in each and the injury to Tyler Lockett could drive more in his direction as well. We’ve already covered how soft the Chiefs’ pass coverage is too giving Fant good odds to score a touchdown. Will Dissly has been a pain in the side of Noah Fant’s fantasy managers all season though as he can sporadically get a higher workload. This is all that is keeping Fant behind Johnson in my streamer rankings.