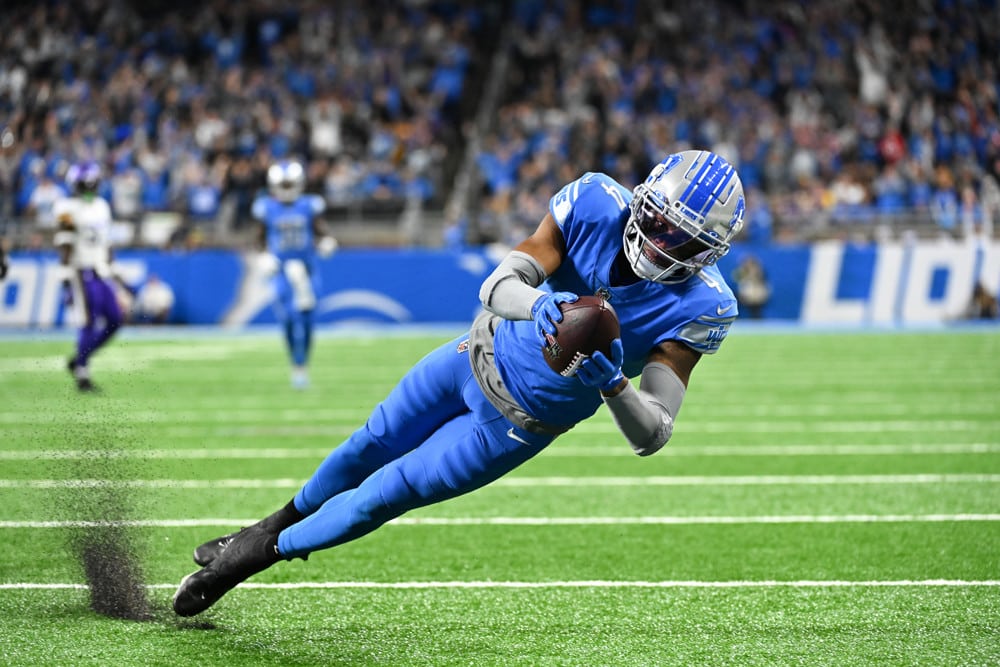 Hello everyone and welcome to SGPN’s first fantasy football playoff streaming article of the 2022 season. It’s hard to believe the fantasy playoffs are already here, and if you’re reading this article, it’s safe to say that you made it in. Congratulations are in order as this was a crazy NFL season and if you are in the playoffs, you definitely made a lot of great decisions.

Regardless, nearly every fantasy team is going to have holes in their roster as injuries are beginning to pile up once again. In this article, I will be identifying some widely available Week 15 fantasy football playoff streaming options and previewing their value for the remainder of the year in doing so I hope I can play a small part in helping you get that elusive fantasy football championship. Good luck this weekend!

My favorite Quarterback streaming option of the week, Mike White is in a great spot this weekend to bounce back. He had a tough outing against the Buffalo Bills, but the Detroit Lions provide a much softer matchup. They are dead last in fantasy points given up to the Quarterback position and are last in points allowed. They’ve shown some improvement recently but still gave up 425 yards and 2 touchdowns to Kirk Cousins in Week 14.

While he likely won’t be a top 12 Quarterback in my initial rankings, that is exactly what he was in his first two weeks as a starter. Furthermore, injuries are beginning to pile up yet again. There likely isn’t a better Quarterback left on your waiver wire if you need a replacement for Lamar Jackson, Russell Wilson, or Tyler Huntley. He’ll be a borderline top 15 Quarterback with upside if this game can get into a shootout.

Mike White is the toughest QB in the NFL right now pic.twitter.com/ZqS8EVrH8U

For those who are in deeper leagues with thinner waiver wires look no further than the new San Francisco sensation. Brock Purdy’s status will need to be monitored however before Thursday’s game against the Seattle Seahawks. He suffered an oblique injury later in the game and was removed but Kyle Shanahan seemed to indicate this was precautionary.

If he’s a full go he will be in a very nice matchup against the Seattle Seahawks’ defense that’s been among the worst in the league this season. He finished as the QB18 in Week 13, and while there are still 4 Quarterbacks left to play as of me writing this, he is currently ranked as the QB8 this week as well.

While he’s purely a pocket passer, he just so happens to be in one of the best offenses in the NFL. Christian McCaffrey was sensational this past week and George Kittle, Deebo Samuel, and Brandon Aiyuk are all capable of breaking a big play. Purdy will be a solid QB2 in my rankings and is still available in 86% of Sleeper leagues.

Almost every Running Back with a pulse is rostered at this point in the season. Chuba Hubbard is still available in nearly 61% of Sleeper leagues though and played very well in Week 14 against Seattle. While D’Onta Foreman still led the team in carries, Hubbard was able to match his rushing output on less volume. Furthermore, he was able to vulture a touchdown away from Foreman and secured all three of his passing targets for 25 yards.

Panther’s Head Coach Steve Wilks attributed this to riding the hot hand but he’s certainly at least worth a roster spot as we get into the fantasy playoffs. He may not have any stellar matchups the rest of the way but he is a widely available Running Back who has an opportunity to seize a sizeable workload in the final few weeks of the season. He’ll likely check in somewhere in back end RB3 territory when I update my rankings on Tuesday.

Chuba Hubbard reaches the ball across the goallline on third-and-goal and the Panthers are up 17-0. Just like everyone thought.

Zonovan Knight only isn’t listed first because of his higher roster percentage (56.5%), but that should be nearly 100% when waivers clear this week. Despite Michael Carter returning to action without an injury designation, Zonovan Knight still dominated the workload. He carried the ball 17 times compared to just 5 times for Carter (who also lost a key fumble). Through three games since making his debut, he has totaled 298 yards and a touchdown.

Furthermore, he’s displayed skills in the passing game even though Michael Carter still figures to be the third down back. He’s done nothing to relinquish his starting role and I expect that to continue in Week 15. The Lions have been surprisingly tough against the Running Back position, leaving him as a fringe RB2, but better days should be ahead. These are the only two Runnings Backs remotely available that could be plugged into lineups next week.

This is another player that should shoot to nearly being 100% rostered by the end of the week and is only at 55.2% on Sleeper right now. After missing seven weeks due to an ankle injury, D.J. Chark has been fantastic since returning in Week 12. He worked his way back slowly in the first game but has accumulated 192 yards and a touchdown in the last two weeks.

He was inserted right back into the Detroit starting lineup and is the clear number two target behind Amon-Ra St. Brown. Jameson Williams made his debut this past week too and caught a nice touchdown pass but this isn’t too concerning to me. Jameson Williams will need time to acclimate to the offense and work his way back to 100% like most players initially returning from an ACL tear.

Big days are ahead for Williams, but I see those coming in 2023. The Detroit offense is clicking and I think D.J. Chark could be a fantastic flex option for a fantasy manager looking to go on a championship run. He’ll likely be a fringe top 30 Wide Receiver when I put out my initial rankings on Tuesday.

Richie James is beginning to develop a bit of a reputation for all of his garbage time touchdowns. Regardless, meaningless touchdowns at the end of the game mean the same to us fantasy managers as any other score. He has quietly found the endzone in three of his past four games finishing as a top 25 fantasy Wide Receiver in each of those matchups as well. James appeared to lose his starting role in the offense midway through the season but has reemerged in recent weeks.

Isaiah Hodgins has also come out of nowhere in a decimated New York Giant receiving core and has caught touchdowns in two straight games. He appears to have a slight advantage in terms of snap percentage over James having cleared 60% in four straight games too. Additionally, he’s received six targets in each of the last two games as well which is why he would be my slight preference over James.

Neither will be safe starts in Week 15, but the goal in this article is to identify widely available players, and reliable ones are rostered at this point. They will be boom/bust WR5s in my fantasy rankings who will likely jump into the top 36 with a touchdown.

Nico Collins missed this past week against the Dallas Cowboys but has a good chance of returning in a fantastic matchup against the Kansas City Chiefs. The Chiefs rank in the bottom five in terms of fantasy points given up to the Wide Receiver position. Additionally, Collins has a great chance of operating as the top receiver too as it wouldn’t surprise me if we didn’t see Brandin Cooks the rest of the way.

Regardless, Collins has been the top target when both have been on the field anyway and this is the same defense that just got cooked by Jerry Jeudy for three touchdowns. Collins has accumulated 36 targets in his last four games as well and that target volume should continue this week. Collins checks in at only a 36% roster percentage too as a lot of people must have dropped him trying to push for a playoff spot.

A sneaky potential valuable flex play down the stretch here

The first Tight End is an easy choice after watching Chigoziem Okonkwo finish as the TE2 in Week 14 only behind Evan Engram. He ranked as the TE9 in Week 13 as well and appears to have taken over the Tight End spot in Tennesse over Austin Hooper. Over the last two weeks, he has managed to come up with 11 receptions, 113 yards, and a touchdown too. Given the status of the Tight End position, he could be entering the TE1 conversation if he continues this pace.

While I’m not quite there on Okonkwo yet, he will be a high end TE2 in my initial rankings. That may seem bold to people after just two weeks, but it might just be bolder to start disappointments like Hunter Henry or Gerald Everett again. Despite the hype train leaving the station last week, Okonkwo is available in over 76% of Sleeper leagues.

Tyler Conklin is the TE12 in fantasy scoring for Week 15 prior to the Monday night matchup with just 5.3 half PPR points. This is a testament to just how bad the Tight End position has been this year but Conklin does have one thing going for him. Over the last two weeks, Tyler Conklin has had 15 targets and has received over 6 targets in 7 games this season.

It just hasn’t materialized into fantasy points or touchdowns yet but that could change down the stretch. In the fantasy playoffs, Conklin will go up against Detroit, Jacksonville, and Seattle who all rank in near the bottom of the league in fantasy points given up to Tight Ends. He’s only rostered in 27% of leagues and should be a top 12 Tight End in Week 15.

It’s no secret that I’m not the biggest Tyler Conklin fan. But no tight end has better playoff matchups than his with Lions, Jaguars, Seahawks.

So I could come around for the holidays.